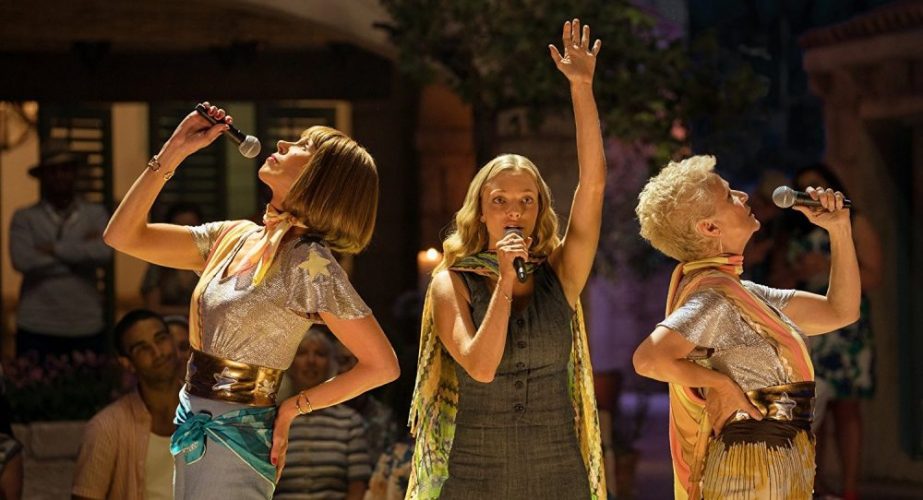 Set about five years after the first film, a pregnant Sophie (Amanda Seyfried), who is in a similar position her mother was, is preparing for the grand opening of the Bella Donna hotel in honour of her mum (Meryl Streep) when she learns all about her past.

What is there not to love about this second helping of uplifting unadulterated slice of happiness and joy?

Plus writer director Ol Parker – not Oliver Parker, who made the recent Swimming With Men – has very cleverly made a prequel within a sequel, which is no mean feat. It will have you dancing and laughing in the aisles one moment and then moved to tears the next (particularly in one key moment) as the action moves from the present to the past and vice versa throughout, during the course of which it also explores motherhood and the need for young women to assert themselves and their independence.

So the film initially takes you back to 1979 and young Donna’s (Lily James) graduation ceremony from Oxford University in which she bursts into a show stopping “When I Kissed the Teacher,” in front of Abba’s Bjorn Ulvaeus playing a University professor, which sets the tone for the rest of the movie.

Waterloo gets its very own dance number as young Harry (Hugh Skinner who has a striking resemblance to James’ real life other half Matt Smith) performs it to win over Donna.

While Dancing Queen is the anthem of the flotilla of boats (Dunkirk style) which brings Sophie’s long awaited hotel guests, including her dads Harry (Colin Firth) and Bill (Stellan Skarsgard) mimicking the Titanic’s “King of the World” scene, to the island (the stunning Croatian island of Vis doubling for the Greek one). It is one of the most surreal and yet joyous moments in the film.

The charming and charismatic James is a revelation, delivering a powerhouse performance as she channels Streep. Her acapella rendition of Mamma Mia, before it turns into a full blown spectacular number alongside the young Dynamos (Jessica Keenan Wynn and Alexa Davies) is exquisite.

The new younger cast slots in perfectly with the legacy team (the older stars) but it is Cher, as the wicked witch of the west as Rosie (Julie Walters) calls her, aka Sophie’s grandmother, who steals the show. (Ironically Cher is just three years older than Streep, her on-screen daughter.)

Thankfully Brosnan, who makes a welcome return, isn’t required to sing this time round.

Of course there is a hilarious post credit scene which is definitely worth the wait, as stand up comedian Omid Djalili, who plays a beleaguered passport checker, bursts into “Take a Chance on Me,” which you should all take on this movie.

I defy even the greatest of cynics not to be won over (okay raise a smile) by this uber upbeat, feel good, Abba-licious, heart-warming sequel. A much needed antidote to our current worrying times.