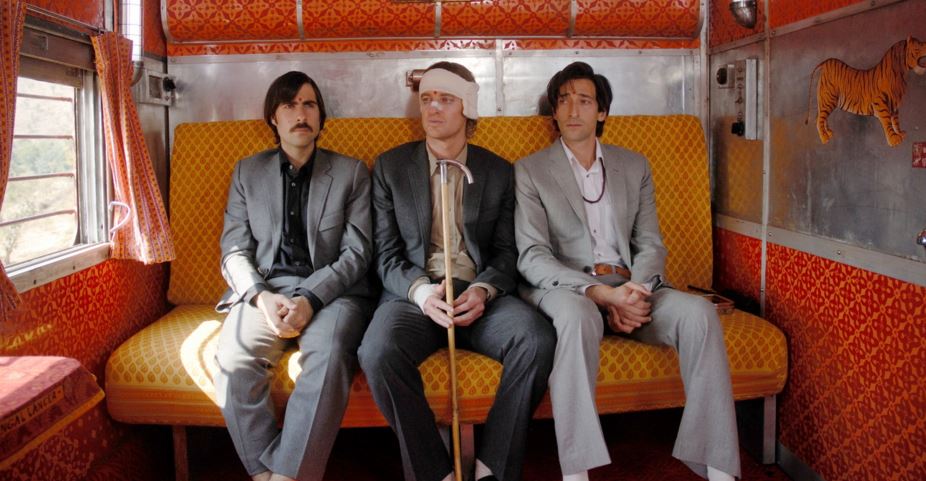 Francis (Owen Wilson) summons his two estranged brothers Peter (Adrien Brody) and Jack (Jason Schwartzman) to join him on a train journey across India to rejuvenate their relationship, find themselves – and persuade their mother (Anjelica Huston) to come back to the US for their father’s funeral.

She’s a nun in a Himalayan monastery, you see.

Along the way, they bond, fall out, fall in love, fall over, befriend remote villagers, take drugs, argue…you know…the usual. They’re brothers, after all.

From Wes Anderson and some of his regular collaborators, you’d expect a quirky and enjoyable film and you certainly get that – the only problem is that this feels just a little too knowing and quirky for its own good.

A road-trip isn’t a particularly original formula, but I suppose as a vehicle for character study, it’s certainly unencumbered by the complexities of a plot. But the story is so linear – literally – that it lacks the substance it requires to sustain a real character-based film of this length.

Previous works from Anderson – such as Rushmore and the Royal Tenenbaums – had stronger stories and characters who – despite being typically quirky – felt real and more believable – and certainly more interesting. In The Darjeeling Limited, much of the humour seems uncomfortably forced.

Indeed, the film is preceded by a short called Hotel Chevalier (in which Schwartzman’s Jack co-stars with Natalie Portman), which is fun and pretentious in equal measure, but seems to exist for the sole purpose of setting up a gag towards the end of the feature – it’s a good gag, but it’s just an example of how contrived the whole exercise seems at times.

It’s almost certain that no other film-maker would have been allowed to make this film, but Anderson is in that enviable position where he can get away with it because of his record and reputation. And being picked as the closing film of the London Film Festival will only go to his head even more.

The performances he’s given by his lead actors might also be frowned upon in another film, but they fit the pseudo-surreal nature of set-up, but a problem is that there isn’t really any attempt made by anyone to make the key characters particularly likeable.

Ultimately, it’s highly enjoyable at the time, but inconsequential and forgettable afterwards.