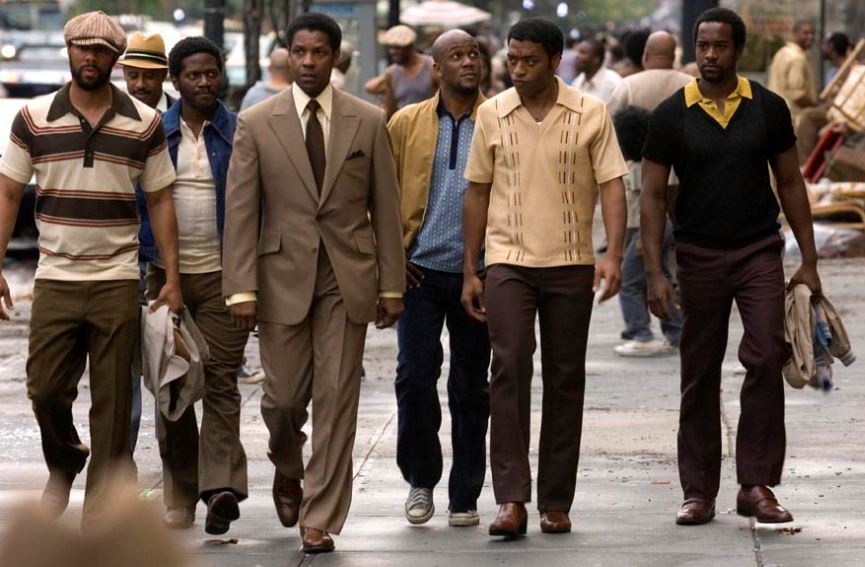 In late 1960s Manhattan, a little-known family man rose to run one of the biggest, most profitable drugs empires the city had known – rivalling the mafia.
Frank Lucas (Denzel Washington) confounded the authorities by bringing in top quality heroine from Vietnam, using his contacts in the military to smuggle the goods back to the US in body bags. That way, he cut out the middle man and undercut the Italians.
As his product grew in popularity, Frank brought in his brothers to help him run his empire. He found himself living the life of luxury with impunity, as no-one knew who he was. Why would they suspect? He came across as a respectable businessman.
It was only when he started to let the power get to his head that his doting mother started to question the way he ran his operation. She was the only person whose opinion ever meant anything to him.
Meanwhile, across the Hudson River, the only clean cop in New Jersey, Richie Roberts (Russell Crowe) has been sidelined by many of his colleagues who don’t trust him to cover for them if weakness persuades them to take a bribe or two. But his rare honesty persuades his bosses to put him in charge of a new anti-narcotics team.
Richie is the first to tie the new drugs to Frank – but no-one believes him – after all, how could an unknown black man be beating the mafia at their own game?
While he’s battling in the court with his estranged wife, the small-time cop from Jersey is desperate to prove himself by bringing down the king-pin of the big city’s drug dealers.

This is “Ridley Scott does Martin Scorsese,” as the British director uses two of the giants of Hollywood to study the underbelly of the Big Apple of the 60s and 70s.
From mentions of the French Connection to elements that will remind you of Heat – not least the cat-and-mouse charismatic-cop-and-criminal storylines, with hardly any shared screen-time – this is a highly cinema-literate film, tightly directed and well-played.
The film might be based on real life, but it still manages to contain some of the stereotypical characters of the genre – the squeaky-clean baddy, the conflicted good-guy, who’s a loser in all but name, and the real hate-figures of the piece are the rest of the law enforcement agents.
It looks like an epic and but it doesn’t quite feel like an epic. The story itself isn’t as dramatic as some of its predecessors in the genre, but when you base a film on real-life, there’s not much you can do about that.
The details of the plot aren’t entirely convincing, as Richie pieces together the jigsaw that reveals Frank’s identity. And although the supporting cast all acquit themselves well, they don’t really have enough to do – the colourful Cuba Gooding Junior aside, their characters aren’t that interesting, leaving the not inconsiderable weight of the picture on the shoulders of two not inconsiderable actors.
That being the case, it’s very much one of those films where you feel that you’d like to see more of the two powerhouse performers bouncing off each other – in Heat, there’s a teaser midway through, followed by a dramatic battle at the end – here, we have a long time to wait for what’s ultimately a chat across a desk – an interesting and surprising chat, but a chat nonetheless. Cinema history dictates that a rivalry like this should probably be settled with bullets, rather than words. Maybe real-life just isn’t always interesting enough.
It’s certainly not a bad film and even at more than two and a half hours in duration, it doesn’t seem too long. But it’s not as satisfying as it could – or should – be and as you leave the cinema, you won’t feel a sense that you’ve watched a piece of cinema history – it’s not the kind of film that will stay with you very long, as it’s not really a film that has much to say.
But if your expectations aren’t too high, it’s good value for the price of your cinema ticket.