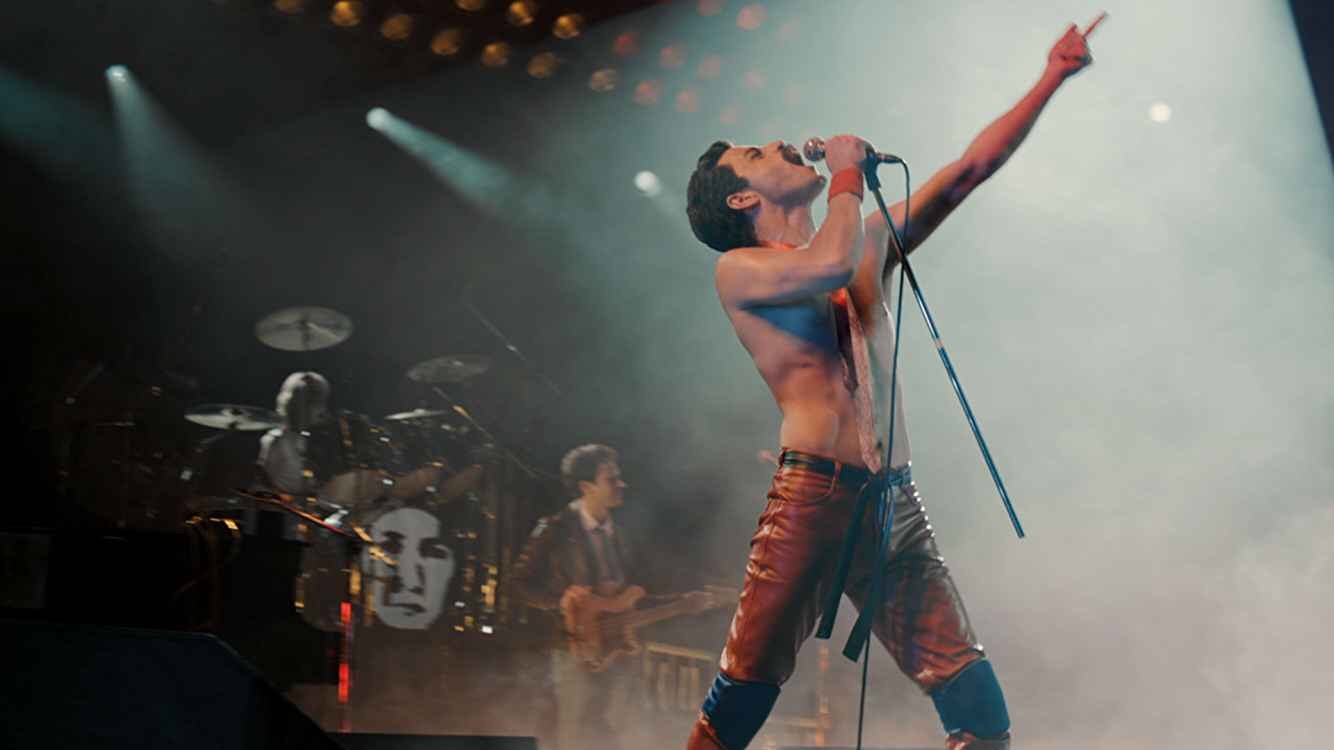 In short, for those in the know, it’s a biopic of the Queen singer Freddie Mercury.

For the minority who aren’t familiar with one of the most successful and innovative rock bands in history, this film is about the rise – and death at the top – of a young Zoroastrian, Farrokh Bulsara (Rami Malek), who’s working as a baggage handler at Heathrow Airport in 1970, with dreams of becoming a singer, writing lyrics on scraps of paper while he’s waiting at bus stop.

One Saturday night, at a live music club, he approaches the guitarist Brian (Gwilym Lee) and the drummer Roger (Ben Hardy) after the gig and persuades them to try him out, after their original singer leaves them for a better offer.

A year later, Farouk has a new name – going by Freddie Mercury, to the chagrin of his traditional father – as does the band, and complete with new bassist John (Joseph Mazello), Queen record a demo, which finds its way to the desk of a record label boss (Mike Myers) who regrets signing them the second the ink is dry.

But each time the increasingly bold, fearlessly creative and self confident frontman comes up with another frightening, crazy idea, it seems to resonate with fans and soon, Queen has become one of the most successful and innovative rock bands in history.

They’re selling out global tours, topping the charts around the world and living the lives of rockstars. But there’s something missing from Freddie’s life.

It comes as no surprise to anyone – but himself – when he realises that he might prefer men to women – a discovery that liberates him but ultimately has a tragic impact on one of rock music’s most exciting, original and unpredictable stars.

There are two things going on here.

Firstly, there’s a Stars In Their Eyes-type display, with four Queen lookalikes, effectively  bringing classic after classic convincingly and exhilaratingly to life, culminating in a 20 minute recreation of the Live Aid set that secured their place in music history – hugely entertaining, although clearly a gratuitous musical interlude that adds nothing to the narrative.

Any Queen fan will be salivating each time the film reveals the writing process and sees a song grow from a catchy riff to a stomping anthem.

Malek’s flamboyant on-stage persona, strutting around the stage in a leotard or tight jeans and a leather-studded arm-band, pointing a bottomless mic-stand to the heavens as he belts out one hit after another, his resonant voice electrifies the air around you will make you forget you’re not watching the man himself.

But off-stage, he struggles somewhat with his dentures and the plummy English accent.

And it’s this second strand of the film that rather, to borrow a phrase, bites the dust.

Spoiler alert: We all know the story – unknown kids become stars, singer rejoices in his homosexuality, singer falls out with band, singer falls in with the wrong crowd who take advantage of him, singer gets AIDS, singer makes up with band, band becomes huge again, AIDS profoundly influences a handful of late songs, singer dies.

And the so-called drama is presented without any kind of magic, and is about as convincing as his early efforts to come across as straight. Hmm…I wonder whether that knowing glance towards that trucker, accompanied by a heavy sigh might be his realisation that he might be gay? Hmm…I wonder whether that waiter whose crotch he boldly grabs (I know it’s long before #MeToo, but does this not portray our otherwise godlike protagonist as a sexual predator?) is going to end up his long-term lover? How romantic. Hmm…I wonder whether that slow-motion walk through the dark hospital, baseball-cap-clad head bowed, is going to result in him getting some bad news from the doctor.

While the music is impeccable, the drama constantly hits the wrong note. Charitably, this could be put down to the much-publicised production difficulties, changing the cast, changing the script, even changing the director during the shoot.

It’s not like it scrimps on the details of his private life – we get the drug-fuelled parties, his out-and-proud homosexuality, the promiscuity – but none of it comes as a surprise. There’s a lot of kissing but in order to secure a 12A certificate, the only bedroom scene that didn’t end up on the cutting room floor involves his girlfriend Mary (Lucy Boynton), before he comes out.

Bohemian Rhapsody is entertaining enough but it’s far from the classic that is the song that shares its name, sharing its musical delight while lacking any of its surprise or originality.

In a nostalgic film that, deservedly, is bound to result in Queen albums returning to the charts, whenever there’s music in a scene, you’ll feel the show must go on. But whenever the familiar narrative is unfolding in a clunky fashion, you’ll feel you want to break free.