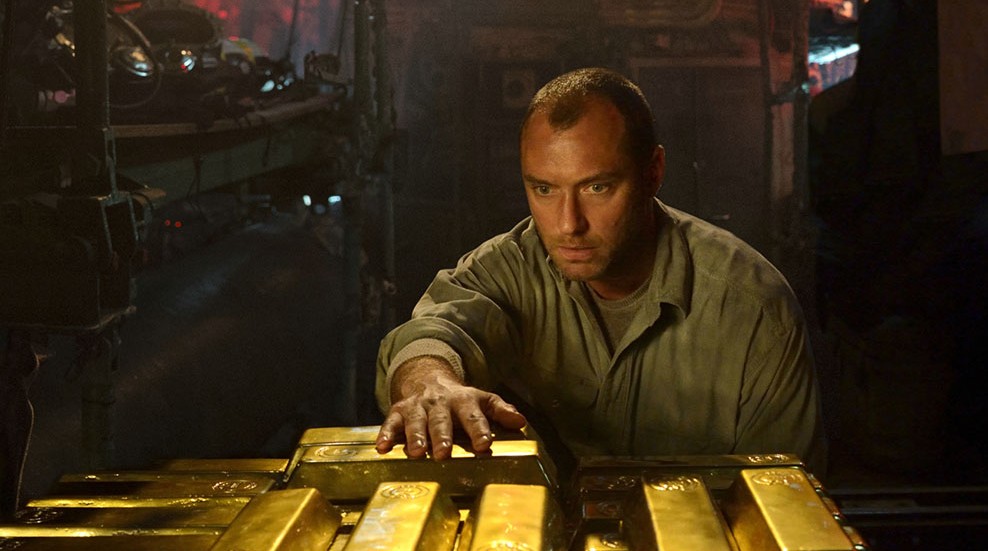 Robinson (Jude Law) is feeling a bit raw after the underwater exploration company he works for lays him off as part of a cost-cutting drive. Who needs a submarine captain? What’s he going to do?

But he finds a new lease of life when one of his former colleagues tells him about the wreckage of a sunken U-Boat that was rumoured to have been carrying millions of pounds worth of Nazi gold when it went down.

A wealthy banker is funding a secret attempt to retrieve the gold from the bottom of the Black Sea and Robinson accepts the offer to lead the mission for a cut of the stash for his team.

With the banker’s right-hand-man Daniels (Scoot McNairy) looking over his shoulder, Robinson puts together a crew, including a hot-headed diver extraordinaire, Fraser (Ben Mendelsohn), and a last-minute addition, a homeless teenager, Tobin (Bobby Schofield).

In a rusty old Soviet submarine, with a team completed by a group of locals who don’t speak English, personalities clash and tensions rise as the sub drops beneath the waves and the Russian Navy.

You’d expect the director of Touching the Void to be able to deliver a bit of tension and this he does, with lives similarly hanging in the balance, as the anglophones and Russians start tearing at each other’s throats, thousands of feet beneath the surface.

Jude Law’s Aberdonian captain does his best to keep the peace, but the longer the unlikely sea-mates find themselves confined to giant, windowless tin can, the more they seem to want to sabotage the success of their own mission.

The film begins with promise, but as the story unwinds, too many twists are punctuated by unexpected, unlikely and unconvincing outbursts of violence.

There are many exciting action sequences and the claustrophobia of the submarine is well handled, even if the limited locations can become tiresome.

But even if you can get over Law’s accent, most of the other characters are archetypes that could have come straight from central casting. And too much of the narrative stretches credibility leaving any audience members trying to engage feeling somewhat unsatisfied.