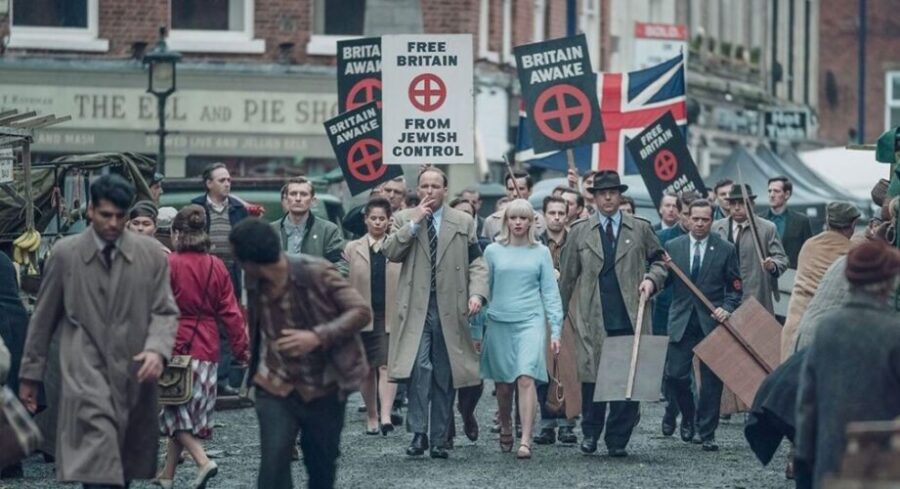 It’s the early 1960s in Manchester. Vivien Epstein (Agnes O’Casey) comes from a nice Jewish family and her father has found her a nice Jewish boy to marry. She’s more interested in her ex-boyfriend Jack Morris (Tom Varey), but he’s just skipped town, urging her to forget about him.

Eager to escape the domestic life her father has planned for her, she follows Jack to London and is shocked to find out that he’s working undercover to infiltrate a gang of neo-Nazis, led by Colin Jordan (Rory Kinnear), for a band of anti-fascist fighters led by her Uncle Soly (Eddie Marsan).

When Jack goes incommunicado, Vivien persuades Soly to let her assume a fake identity and follow him into the fascist group, where she catches the eye of its leader.

Can this unassuming Jewish hairdresser from Manchester convince the Nazis that she believes in their cause long enough to help Jack, without either of them blowing their cover?

This four-part drama – based on the novel of the same name – is a fictionalised account of the real battle between the 62 Group of Jewish anti-fascists and Colin Jordan’s National Socialist Movement.

It suggests how frighteningly easy it was for the neo-Nazi movement to build support in otherwise liberal, disenfranchised working class communities, by creating scare stories about how the Jewish community was responsible for everything that was going wrong in their lives.

The underlying theme has a worrying sense of immediacy as 21st Century Britain continues to be politically polarised.

But while Ridley Road feels like an important piece of accessible television, the drama itself is unconvincing – both in terms of story-telling and production values.

The idea of a naive young hairdresser adapting so well to the dangerous world of subterfuge and espionage – in search of both love and justice – lacks credibility and there’s a sense of futility to the story from both the narrative denouement – and the reality of history, although the production team can’t be blamed for the latter.

But worse, as a piece of TV that’s being sold as a landmark prime-time series, the production values feel more like an after-school drama.

Eddie Marsan gives a barnstorming turn as the leader of the Jewish resistance but much of the acting is stilted, the fight scenes are about as convincing as watching a drama class in stage combat and – perhaps because of Covid – there seem to be so few people at protests that you almost wonder whether there was even a problem at all.