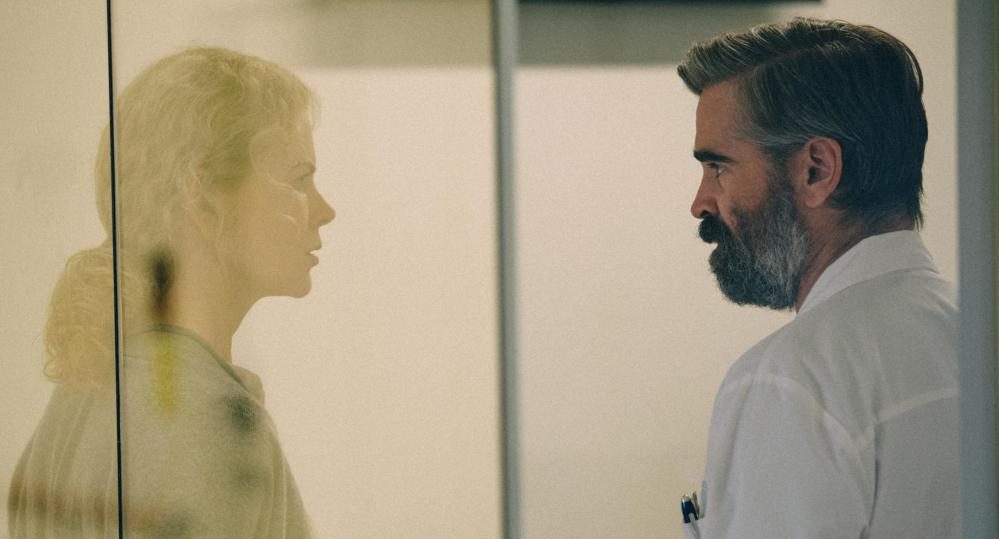 He lives in a clinically clean, modernist home with his wife Anna (Nicole Kidman), their son Bob (Sunny Suljic) and their daughter Kim (Raffey Cassidy).

But he’s secretly seeing someone on the side – not another woman, but what appears to be another son, Martin (Barry Keoghan).

When the link between Martin and Steven is revealed to the rest of his family, Steven’s children are suddenly struck down by a mysterious condition.

When none of the finest medics can cure them, Steven is challenged to make life-changing decision.

Coming from the man who brought us the absurdist parenting satire Dogtooth and the surreal romantic thriller The Lobster, it’s clear from the outset that this will be far from the more standard storytelling we saw last time Colin Farrell and Nicole Kidman shared the screen in another contender from this year’s Cannes competition, The Beguiled.

From the opening scene, Yorgos Lanthimos goes out of his way – or perhaps it just comes naturally – to throw the viewer off guard. Whether it takes a disturbed mind to disturb minds is open to question, but what Lanthimos sees as a comedy will, to most audiences, play like a creepy and disturbing horror.

From the physical ailments to the mind games that appear to prompt them and stem from them, viewers will be confused, upset and often enthralled – but you’d be advised not to fall in too deeply, because Lanthimos doesn’t provide many of the answers you might be seeking. In fact, at his Cannes press conference, he claimed that he didn’t even know the answers and he was content for audiences to come to their own conclusions.

Are evil powers trying to rip the family apart? Is it a manifestation of guilt? Is jealousy at play, or is it cold revenge? Is justice being served or undermined? Where does responsibility end and loyalty begin? The set up is fascinating but it gives way to a disappointingly unsatisfying denouement and not just for its nihilistic streak.

It’s welcome not to be spoon-fed, but it could be suggested that it’s unfair to make you engage and then leave you hanging. It does rather beg the question of whose job it should be to tell the story – and if the director doesn’t know what he’s making a film about, should he even be making it, or is it acceptable to argue that art is in the eye of the beholder, rather than in the eye of the artist? I dare a first-time director to try to get funding for a film like this.

Having said that, from Colin Farrell’s deliciously dead-pan protective father to the clinically clean cinematography, the plot, such as it is, is skilfully delivered as the unexplained narrative unfolds with escalating menace, and the tension ratchets up to an explosive finale.

The Killing of a Sacred Deer is clever but perhaps not quite having the courage of its convictions.

It’s an interesting and quietly chilling piece of work but feels more superficial than The Lobster or Dogtooth, which seemed to have more to say about society.