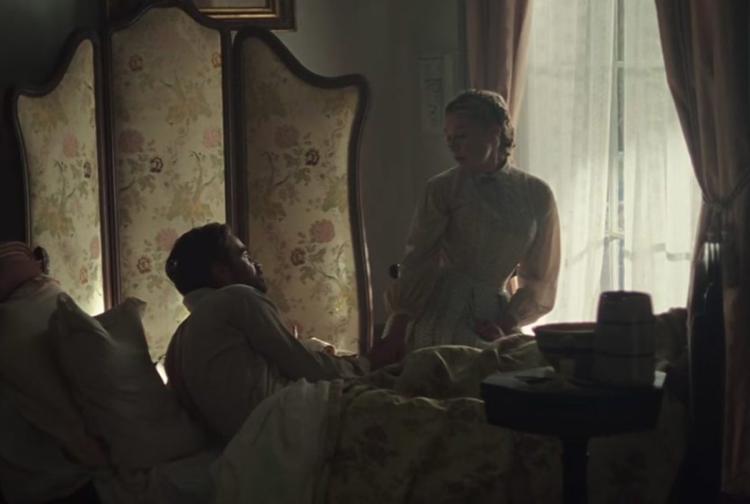 During the American Civil War, Miss Martha (Nicole Kidman) runs a boarding school for young girls in Virginia, with only a handful of pupils.

When they find a wounded enemy soldier, Corporal McBurney (Colin Farrell) in the woods outside their compound, they decide to take him in and nurse him to health.

The girls and their teachers all fall for their charming guest and fight for his attention – and affection – but as he begins to recover, he starts to play them off against each other.

Before long, Martha realises that he’s a bad influence of the group and sets out to stop him in his tracks.

Sofia Coppola’s remake – or re-imagining – of Don Siegel 1971 US civil war era drama puts Colin Farrell in the shoes – or bed – of Clint Eastwood – and puts the narrative in the hands of the female protagonists.

The film won Coppola the Best Director honours at this year’s Cannes Film Festival, despite initial reports that critics at early screenings were laughing at it. It’s more likely that they were actually laughing WITH it, as a handful of lines of dialogue are just so off-beat – and examples of acting so over-cooked – that they must have been playing it for laughs; film-makers with this experience can’t possibly have been taking this seriously. And the quirky, knowing humour effectively cracks the darkness – both chromatic and thematic – that imbues the film.

Some of the humour comes from the perverse ways in which the women and girls try to outdo each other in their efforts to woo their guest, particularly since there are young girls, teenagers and adults all competing for his affections. But while most of the efforts to inject humour seem certain to be intentional, they’re often somewhat clumsy, giving the film an uneven tone, which might usually mitigate against a Best Director award, but that’s Cannes for you.

It’s an interesting and morally ambiguous tale – intimate and claustrophobic in scale – as it examines the power of sexual attraction – and jealousy – particularly in a case where a group of sexually repressed young women rarely see a man of any kind, let alone a vulnerable, attractive young soldier – enemy or otherwise.