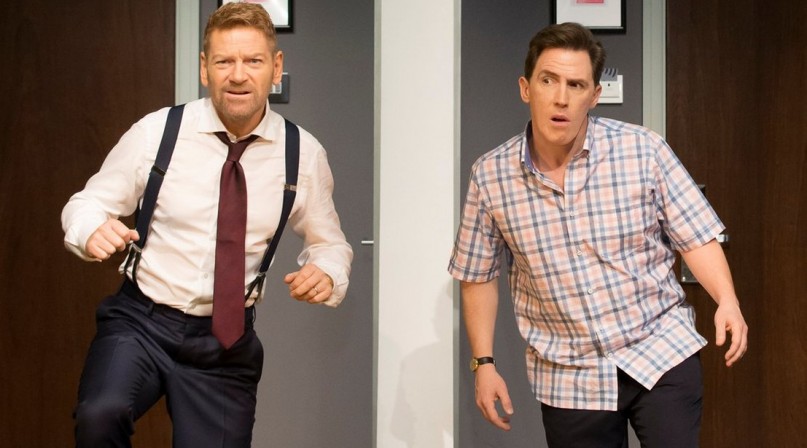 Two men check into adjoining hotel rooms – one is a trained killer, the other wants to kill himself.

The two quickly become, chaotically and hilariously, embroiled in each others lives.

We all know that wonderful feeling – sitting with a few hundred people, laughing uncontrollably, at perfectly judged, perfectly timed comic performances. And it really doesn’t get better than this.

This wonderful farce, with acres of slapstick, hurtles along at the speed of a bullet (which is apt, given the huge rifle that plays a part in proceedings).

Sir Kenneth Branagh and Rob Brydon find themselves in next-door rooms in a London hotel. Branagh is Ralph – a hitman, preparing to take out his victim from the window; Brydon is Dudley – a local newspaper photographer ready to kill himself because his wife has left him.

Once the emotional hotel porter Vincent (Mark Hadfield) has clocked the photographer’s mental state, he swiftly enlists the hitman to keep an eye on him.

The pace never lets up – with the story accelerating down ever more hilarious avenues. Dudley’s wife, Michelle (Claudie Blakley) and her new partner Dr Dent (Alex Macqueen) bring another level of complexity, chaos and hilarity.

The standout revelation of the evening is observing Branagh’s extraordinary physical comedy. After being injected with horse tranquiliser, in a case of mistaken identity, he flails and flops all over the set, legs like poles of flimsy rubber, face contorting, words hilariously slurred. It’s a truly joyful comic performance. Brydon, of course, is a master performer in this field and also gives the slapstick both barrels – as do Blakley and Macqueen.

With a cast that cannot be faulted, a script packed with terrific one-liners and perfect comic timing, this is one of the best comedies to hit the West End in years.