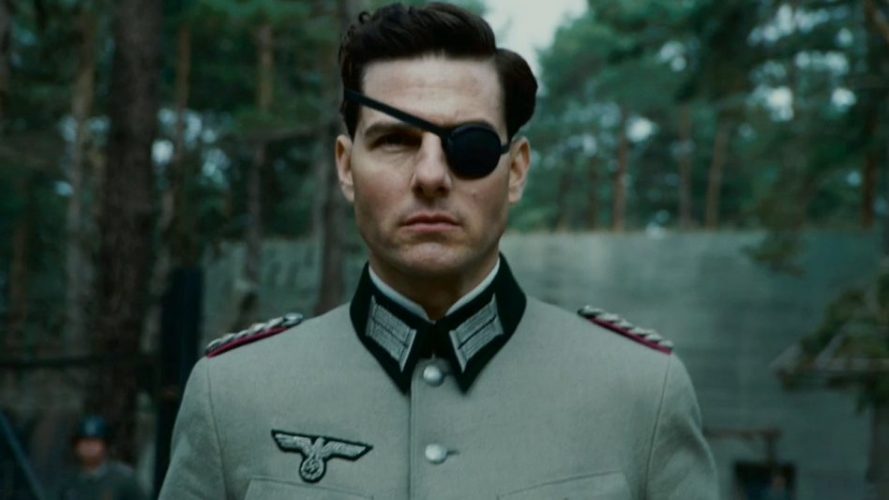 Nearing the end of the Second World War, Hitler’s not doing too well on the eastern front and a group of dissident Nazis – both military and civilian – are plotting to overthrow him.

After a failed attempt to kill the Fuhrer, by Major General von Tresckow (Kenneth Branagh), the coup leaders manage to rope in the war-wounded Colonel von Stauffenberg (Tom Cruise) to join their cause.

Even if he hadn’t lost a hand – and two fingers off the other one – he’d still have been disillusioned with the brutality of Hitler’s regime.

Together, the plotters want to take control, so that they can make peace with the allies on their own terms, rather than wait for Hitler to lose the war – and lose all Germany’s dignity with it.

Von Stauffenberg has a job of two parts. He has to rewrite the rules of a secret operation, known as Valkyrie, to give the reserve army, which he now heads, to enforce military rule in Germany, in the event of Hitler’s death.

The second thing, then, is to kill Hitler.

This is one of those clever cases of a suspense film where we all know how it ends, but that doesn’t spoil the tension or the enjoyment.

Even people who don’t know anything about history know that Hitler wasn’t assassinated by a bunch of dissident Germans – yet somehow, under the direction of the Usual Suspects helmsman Bryan Singer, this is a taught, suspense thriller and you find yourself biting your fingernails and wishing the plotters success.

That said, while it’s surprisingly exciting, many of the developments don’t really ring true and too many of the characters can’t seem to decide which side they’re on – perhaps, though, that’s part of why the plot failed?

Another part, perhaps, is putting a man with only three fingers in the central position.

One of the best things in favour of this film is the linguistic presentation of its characters. I’ve recently been frustrated by the likes of The Reader and Defiance, in which eastern European characters (German and Belorussian, respectively) were played by English speaking actors who spoke to each other in English, but with comedy European accents. In such cases, one wonders why they don’t just go the whole hog and get native speakers to use their own tongue and furnish the audience with subtitles.

Here – as Sean Connery did in The Hunt for Red October – Tom Cruise begins the film speaking in German (for Connery, it was Russian) and during the first scene, his voice mixes into English, after which all the actors stick to their own accents. This takes the language and accent out of the equation, rather than being comically off-putting and turning a wartime drama into “Allo, Allo.”

The film says it’s based on true events. But just how true IS this account of Von Stauffenberg’s failed coup. There’s no doubt that he tried to kill Hitler, but the question is over his motivation.

This film presents the conspirators as a group of Nazis who abhor Hitler’s racism and brutality and desperately want to show the world that not all Germans are like him.

Cruise’s Nazis want to surrender with dignity and negotiate a peace deal with the allies.

But some historians argue that actually, it was quite the opposite. Von Stauffenberg and his cohorts, they say, actually thought Hitler wasn’t evil or effective ENOUGH and wanted to topple him so that they could strengthen the army’s force as they pushed into Russia on the eastern front.

You couldn’t have Tom Cruise playing a character like THAT now, could you?

So does it really matter which course of events was true? There’s a sense in which this is a film about a group of Nazis trying to kill a man we all have to hate — and I suppose your enemy’s enemy is your friend, right?