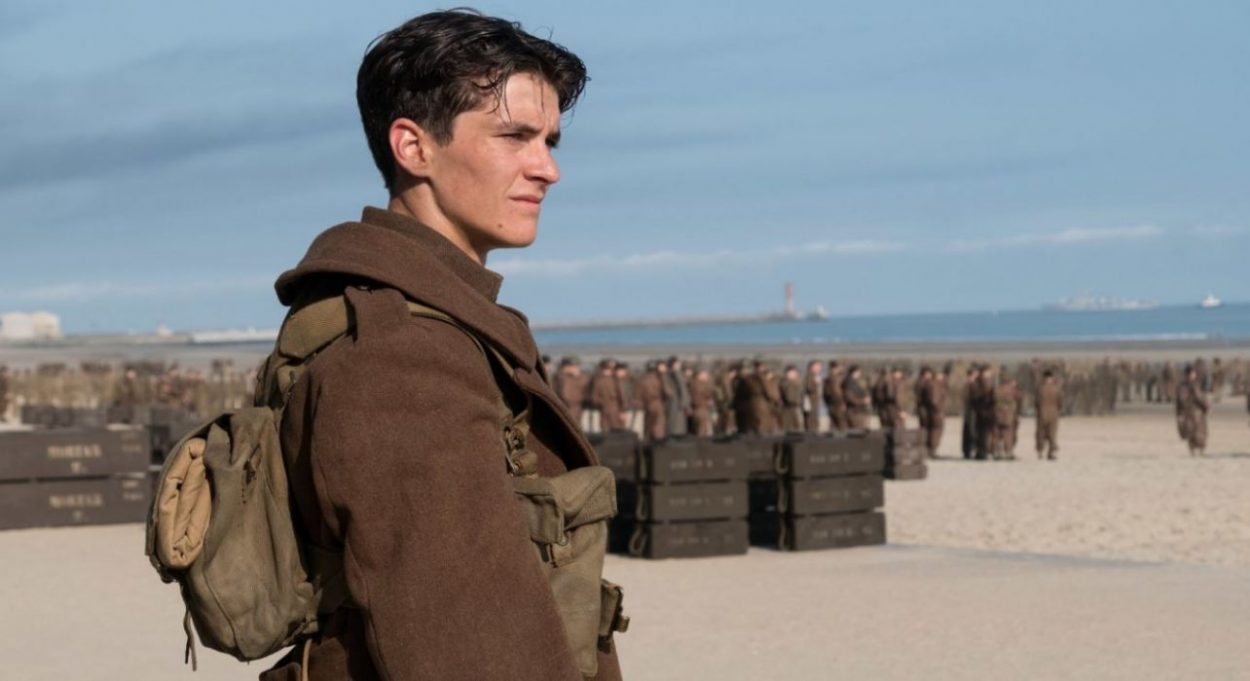 They’re like sitting ducks, vulnerable to sniper fire from the land and bombing from the Luftwaffe overhead.

The Royal Navy is trying to coordinate an evacuation but the German forces keep attacking the ships that have come to take the soldiers home.

One of them, Tommy (Fionn Whitbread), will try anything to get to the Red Cross ship that’s currently loading men at the sea wall – or mole – at the end of the beach.

The operation is being overseen by Commander Bolton (Kenneth Branagh), a seasoned and honorable seaman.

Back home, the Navy has commandeered a fleet of small private boats to cross the Channel to join the evacuation operation. Mr Dawson (Mark Rylance) sets off under his own steam to do his bit for King and Country.

A pair of RAF Spitfires, piloted by Farrier (Tom Hardy) and Collins (Jack Lowden) are patrolling the skies, doing their best to deter German Messerschmitts, determined to stop the allied forces escaping.

Many will know the story – but few who were there survive. But after experiencing this film – for that’s what it is, an experience – you will feel like you were there.

Christopher Nolan tells a huge story – of huge historic significance – on a huge-scale – on a huge canvas – but concentrating on a handful of individual tales rather than the big picture, it has an oddly intimate feel.

Employing his preferred Imax format – and this is a film that deserve to be seen on the biggest screen possible – Nolan immerses the audience in one of the biggest allied defeats of the Second World War.

“Survival is victory,” is the tag-line and this film embodies the human survival instinct. As such, there are some heroics – chiefly Mark Rylance’s efforts to rescue our boys and Tom Hardy’s determined aerial antics as he does all he can to protect the operation – but on the ground, there was what in any other situation might be regarded as cowardice and selfishness. But we get it – we’d all want to survive – quite possibly at the expense of anyone standing in the way, friend or foe. It might not always be honourable, but it’s real.

For some it will be shocking, for others exhilarating as the horrors of war and the futility of fighting are presented to us – life is cheap and bravery is as much of a life-saver as luck.

Seeing a close-up of Tom Hardy’s face, constantly masked as it was in The Dark Knight Rises, projected the height of a five storey building makes you feel that you’re sitting in his lap, experiencing the dogfight first-hand. The vast open space of the Dunkirk beach continues as far as the eye can see, highlighting the scale of the rescue operation and the vulnerability of the men on the beaches. And the loneliness of the small boats on the sea brings to the fore the scope of the task – bringing back hundreds of thousands of men on boats on which a dozen people would be an uncomfortable squeeze is not an attractive prospect.

As war itself would be, this is an assault on both the eyes and ears, as the grand images are accompanied by Hans Zimmer’s score – pounding like a heart-beat, supported by the rhythmic thumping of bombs, boots, waves, engines. Sometimes, the sound mix goes a little too far, making the dialogue a little difficult to make out, but in truth, the dialogue is secondary here – there’s very little of it, in fact, no discredit to any of those on screen, but there’s very little acting at all.

Most of the acting is reserved for Mark Rylance and the boys on his boat, as he spouts trailer-friendly aphorisms along the lines of “there won’t be a home if we don’t get our boys back.” This is not a film that grabs you emotionally – you don’t particularly feel for the characters; rather than the usual modus operandi of persuading viewers to empathise with the people they’re watching in screen, Nolan places the audience in situ and lets you experience it for yourself.

But anyone who’s been following Nolan’s career since Memento won’t be too surprised to notice, some way into this film, that he’s playing with a fractured narrative. At first, it seems unnecessary – almost like he’s showing off – trying to shake it up a bit, as if he doesn’t quite think his simple narrative has enough going for it otherwise. But setting the events on land over one week, the events on the sea over one day and the events in the air over one hour, the structure is the only way the chronology can work, while giving due airtime to each theatre of war. However, every time you nod proudly to yourself that you recognise a particular character or boat from earlier in the film and boast that you know what’s going to happen to them, it takes you out of the moment and the narrative loses its punch.

Nolan isn’t trying to make a point or deliver a message about war – in general or this specific one. It’s not a history lesson – but perhaps it is a taster. Nolan isn’t telling the story of this war or considering who is making what decisions or why. He’s not even giving the bigger picture of this particular event – we don’t even see a single German face. He’s simply describing the experiences of a hand-picked cohort of servicemen and civilians involved, so strategic questions are raised and never answered – with hundreds of thousands of vulnerable allied infantrymen lined up on the beach for a week, you’re left wondering why on earth the Germans didn’t just bomb the seafront continuously from the air until there was no-one left, rather than the odd token bombing of a Red Cross ship. But a film that sends you straight to Wikipedia after the end of the closing credits has probably done its job. I’d certainly never heard of the “halt order” before this film – it might have been less distracting if I had.

Despite concentrating on a small number of individuals in the context of the wider rescue operation, Nolan – a film-maker supremely confident in his own bold vision – avoids the frequent traits often employed by his contemporaries of too much exposition, character back-stories to boost sentimentalism and almost unheard of in Hollywood these days, he brings the film in at well under two hours.

Only in the final scene does he give in to temptation slightly and veer towards sentimentalism, as he turns a rare cinematic study of a military defeat into an example of how pride was snatched from the jaws of failure, illustrated by the men’s welcome home as the words of Sir Winston Churchill resonate across the auditorium.