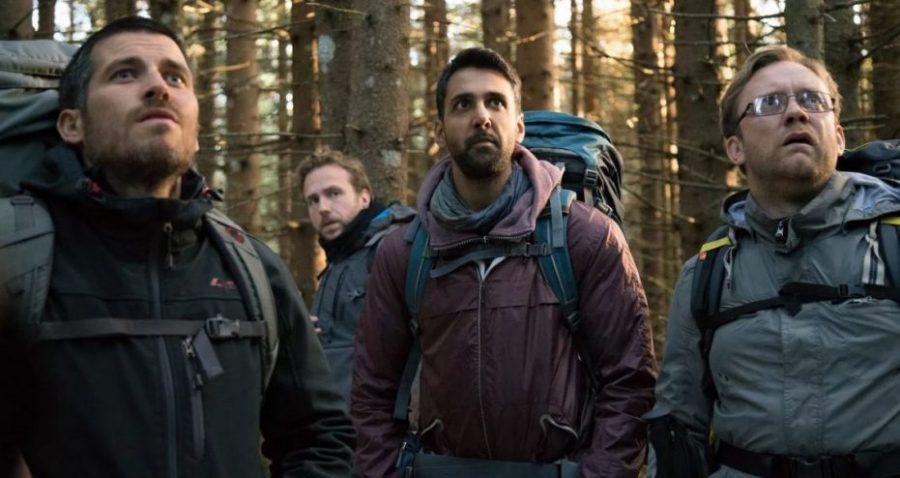 One night in the pub, five friends are arguing about where they should go on holiday together. Rob (Paul Reid)’s suggestion of hiking in Sweden is laughed down – but after he’s killed in an armed robbery on the way home, the rest of the gang reluctantly agree to spend their break in Sweden in his memory.

One evening during the trip, they realise they won’t be able to make it back to the hotel before night-fall unless they cut through the deep, dark forest. No-one is particularly excited by the prospect, but it’s that or a night out in the open.

On their way through the forest, they find a wooden shack that could at least provide them with shelter, but during a creepy, unsettled night, each one experiences a nightmare that goes right to the heart of his deepest fears.

Relieved to see the morning light, they can’t set off again quickly enough, but the forest has more nasty surprises in store – not least animal carcasses, hanging from the trees above them, far higher than anyone could reach to have put them there.

They’re not alone in the forest – but what or who is watching them, taunting them? With their hotel seeming further away than ever – and with their hopes of ever reaching it fading – the four head deeper and deeper into the forest as they fight their demons – both metaphorical and literal.

There’s a ritual that horror fans put themselves through – sitting down with a few pals and a few pints to watch a few pals confront their fears as they march, one by one, to a grisly death.

Not one to give away spoilers, but anyone familiar with this ritual won’t be surprised that the only actor they recognise from this ensemble will be the last one left.

While the set-up works nicely – the lads pay tribute to their mate by going on the holiday he’d wanted – and the initial shocks and horrors keep you on your toes, from that moment, it all falls apart. Very quickly.

And the more you think about it after the fact, the more ripped to shreds it seems.

When we find out what they’re running from, it’s a huge, illogical disappointment and everything about another group of people they encounter in the heart of the forest jars horribly.

The early scenes suggest we’re in for a comic-horror, but any humour quickly vanishes.

Initially, it’s not quite clear whether it’s actually a supernatural chiller or it’s just masquerading as one – not least because a real demon would presumably do more than make its victims wet themselves or miss their wives. Woo – spooky.

There’s plenty of torture-porn-style grisliness which will appeal to audiences who are already going along with the plot but for anyone already feeling left behind, this will only aggravate them further. From a viewer’s point of view, it’s more disgusting that frightening.

There’s a market for such low-budget horrors, with a cast as small in size as the number of locations, and a by-numbers narrative is to be expected, but in this case the shocks are too obvious or clunky, the plot is nonsensical and we never get to know the characters well enough to care about whether they escape.

The film-makers, like their characters, misstep at almost every opportunity. Pretty much all this has going for it is its Friday 13th release date.