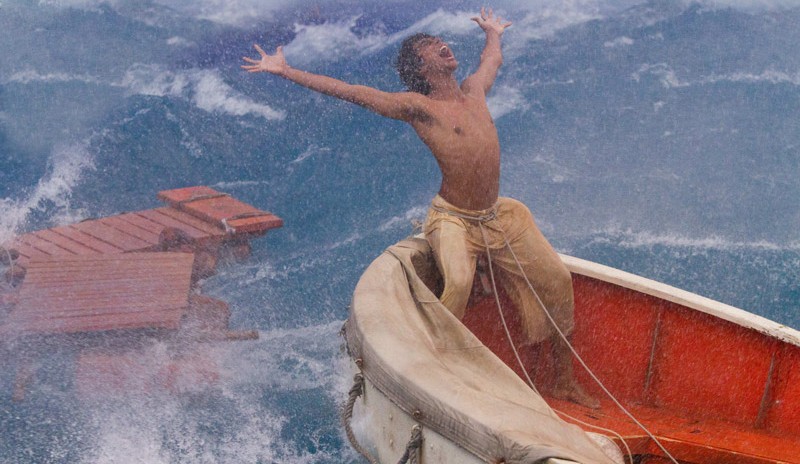 A writer (Rafe Spall) is sent to interview a university professor Pi (Irrfan Khan) about the incredible journey that brought him from the French administered part of India to Canada, some years earlier.

As a young boy, he grew up at his father’s zoo, but when he was a teenager, his father revealed that the family could no longer afford to remain in India and had to move – with the animals – to Canada.

A storm strikes the cargo ship that’s carrying them across the Indian ocean and the only survivors are the teenaged Pi (Suraj Sharma), a zebra, a hyena, an orangutan and a Bengal tiger named Richard Parker – due to a clerical error.

And only two of them make it safely to shore.

Based on the Booker-winning novel by Yann Martel, the latest film from one of the most versatile of directors, Ang Lee, is somewhat constrained from the start, in terms of story and structure.

It’s at its best when we’re travelling with the young Pi and his fellow castaways in the lifeboat, floating helplessly in the middle of nowhere. Watching him learn to fend for himself, develop survival skills and learn to share his new world with his companions is by turns fascinating, heart-in-mouth thrilling and life-enhancing. At times, it stretches credibility just a little, but the claustrophobic choreography and stunning cinematography, complete with some of the most effective and least gratuitous 3D visuals to hit the big screen, mean that there’s never a dull moment in this section of the film.

But every time the story approaches a dramatic climax, we withdraw to a kitchen in Canada, where an older Pi is telling a younger writer about his experiences. Two men, sitting chatting over coffee. Not so thrilling. Why Martel felt the need to frame his novel in terms of a modern-day narrator, telling his story to a Canadian writer, is questionable, not least because Pi is clearly a capable enough raconteur himself not to need someone else to write his story.

A scene at the end, in which the young Pi explains to insurance assessors how he survived, questions the version of events that we have just witnessed, opening the possibility that his telling of the story could in fact have been an allegory for a different set of events altogether; a less fanciful, less magical set of events that would make the film a lot less interesting if true.

It’s certainly the case that this plays into the earlier motif of Pi as a story-teller, rather than an adventurer, which hints at the film being more about a raconteur telling tall stories for effect, than about the amazing tale of survival that will enthrall all-comers – a far less satisfying film.

There’s a suggestion that the alternative presentation of events is meant to strengthen our belief in god. It certainly didn’t have that effect on me.

Life of Pi works well as a story of survival against all the odds – less well as a religious or philosophical parable.