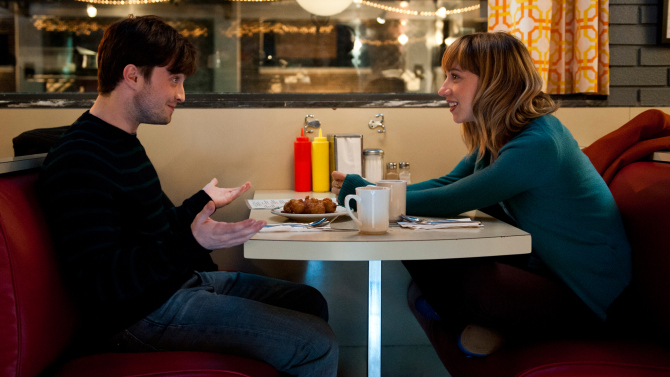 Medical school drop-out Wallace (Daniel Radcliffe) is still sore about catching his then-girlfriend having sex with a tutor between lectures.

At the birthday party of his best friend Allan (Adam Driver), morose messages about the futility of love that he’s making with fridge magnets seem to strike a chord with his host’s cousin Chantry (Zoe Kazan) and the pair strike up a conversation. By home time, Wallace and Chantry are still chatting and he ends up walking her home. He thinks his luck is in, until – outside her apartment – she suggests that he pops round one day for dinner with her – and her boyfriend Ben (Rafe Spall). What a tease.

Still, they got on well and he’s down on love anyway, so why not keep in touch with her and remain friends? Soon, Wallace and Chantry become best friends.

But when Ben gets a job offer in Ireland, he just can’t resist taking it, leaving Wallace finding it ever harder to stay in the friend zone, until Chantry gets a job offer that tempts her in Taiwan. Can men and women be friends or does the sex part always get in the way?

What if the film’s title had a question mark at the end, like questions are meant to?

What if this romantic comedy had been either romantic or funny?

What if Daniel Radcliffe had stuck to what he did best, playing a boy wizard, rather than trying to become a romantic comedy lead, with an inexplicably clipped English accent for someone who would have immigrated to Canada with his parents before he could even talk?

What if Wallace’s supposedly profound musings on love had been grounded in any sense of reality or linguistic elegance?

What if the film could decide whether it wanted to be centred on witty, mellifluous dialogue or corny, cliche-ridden slapstick?

What if there had actually been any chemistry between Wallace and Chantry?

What if there had been any chemistry between Wallace and his most unlikely of best-friends, the foul-mouthed Allan?

What if this film hadn’t been urging the audience to root for the protagonist to break up a perfectly good relationship between a delightfully quirky animator and her supportive and loving human-rights lawyer boyfriend?

What if Chantry’s response when she finds out the truth was coherent?

What if the film had used it’s original Canadian title, “The F Word,” or perhaps even been even more subtle and gone for “When Wallace Met Chantry?”

What if you didn’t have to wait until a somewhat arch animation over the closing credits to find out what actually happens in the end?