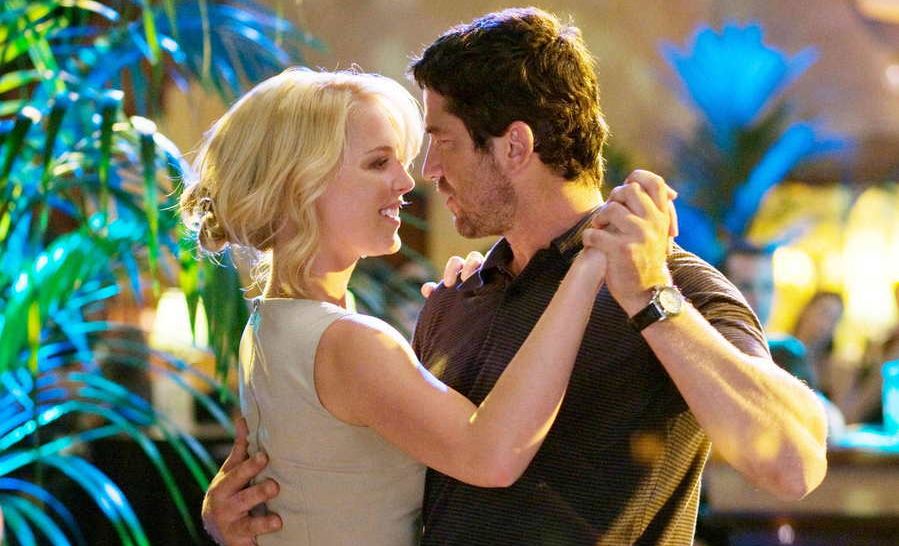 One night, after a bad blind date, her cat treads on the remote control and she finds herself watching loathsome chauvinist Mike (Gerard Butler) telling viewers to his cable TV show how to find a lover – women are advised to lose weight, for example.

To her horror, when she gets into work the next day, Mike has been hired to do a slot on her news show, to boost the ratings.

The ratings are duly boosted, to her disgust, and when she realises that his base ways – his “ugly truth” manifesto – might help her hook the hunky doctor next door, she starts to play along, no matter how much Mike turns her stomach with every breath.

When Mike’s popularity sees him get an offer from a rival TV station, Abby’s sent to follow him to LA to stop him jumping ship.

And you’ll never guess what happens…

Titles, titles, titles – you don’t call your film “The Ugly Truth” if reviews can then flip it back in your face and say “Blah blah blah – the ugly truth is that this is ‘insert expletive here’!”

This film has been roundly condemned by many moralising critics, unfairly in this sense. It’s by no means a good film. It’s meant to be a romantic comedy, but it’s not funny, hardly romantic and certainly neither sweet nor charming – but it’s a pleasant and harmless enough diversion – and here’s the thing – as the title suggests, it actually gets dangerously close to the truth enough for it to play more like a psychological drama.

Therein, I suspect, lies much of the distaste for this film from some reviewers – they don’t like the fact that there IS some truth in the characters’ behaviour and as such are, perhaps, projecting onto the film some of the darker feelings they don’t want to admit they have about themselves.

Guys who think that Mike’s shallow misogyny gives all men a bad reputation may well hate the fact that they have been known to objectify beautiful women themselves, from time to time. And when Mike’s history is revealed, explaining why he views most women in such a dim light, there will be many men who can identify with him – among them, the lead character in the upcoming 500 Days of Summer.

And women who balk at the idea that anyone might ever fall for such a loathsome beast have probably hated themselves for making out with some guy who charmed them in a pub or pined for too long after someone who’d treated them badly.

A female friend once told me – with no agenda – that “the good guy’s not hot.” And that is the ugly truth that this film attempts to portray.

So, getting all the moralising out of the way, this is where the film truly falls down – its humour is crude, blunt, obvious and inconsistent – the performances clumsy – and few of the situations seem in any sense truthful – laughably inappropriate, on the whole – and this is probably the only laughing you’ll find yourself doing.

After a second recent turkey, following the considerably worse PS I Love You, Butler has shown that romance – and accents – aren’t his thing; he’d be better of sticking to playing tough guys, as he did in 300 and RocknRolla.

And for Heigl, this is further proof – if any were needed – that actors shouldn’t always be allowed to produce their own movies – leave the producing to people who know what makes a good film. In Knocked Up, she had maturity and depth. Here, she is a caricature – dull and deserving of all her misfortunes – attempting to be the same kind of put-upon unlucky-in-love TV news producer as Holly Hunter was in Broadcast News, she fails to display any of the complexity, maturity or warmth.