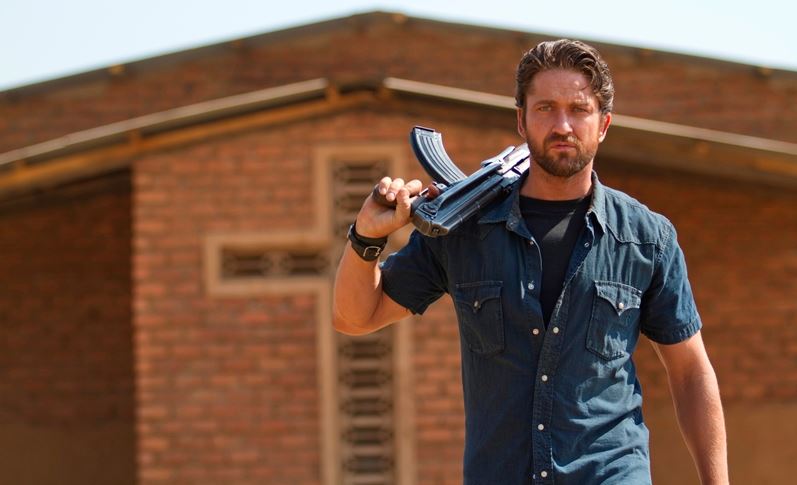 Trailer-trash Hell’s Angel Sam (Gerard Butler) comes out of jail and is shocked and angry to find that his wife Lynn (Michelle Monaghan) has found God and given up stripping in favour of a low-paying shelf-stacking job at a supermarket.
But after one too many nights out on the drink and drugs with his old buddy Donnie (Michael Shannon), he realises that he needs to change. He joins Lynn and their daughter Paige (Madeline Carroll) at church and ends up being baptised, before starting to make an honest living as a builder.
A visit to the church by a preacher who’s been working in east Africa tweaks Sam’s interest and one morning, he wakes up, believing that God has visited him and told him to build a new church in his Pennsylvania town and go to volunteer on a construction project in Uganda.
Lynn supports him in the building of a church that won’t look down on those from the wrong side of the tracks and when the invited preacher fails to turn up for the first service, Sam takes to the pulpit himself, with nothing but his childhood bible-study and newfound passion to rely on.
But it’s the busman’s holiday in Uganda that changes Sam’s life forever. He persuades a couple of Sudanese soldiers, escaping a civil war north of the border, to take him to see the action and he’s horrified by the brutality that he finds; the Lord’s Resistance Army is using kidnapped child soldiers to wage a meaningless war on civilians in southern Sudan with only the Sudan People’s Liberation Army to protect them.
Sam’s new purpose is to build an orphanage in southern Sudan where he can protect resuced children from the fighting. Initially, Lynn is happy to continue running the church back home, while Sam does God’s work in Africa, but before long, Sam’s efforts in Sudan are taking over his life and the very survival of his family comes under threat.

This is one of those stories that seems so unbelievable that if we weren’t told it was based on the memoirs of the real Sam Childers, you could be forgiven for saying “Yeh – right – whatever – give me a story I can believe.”
The idea that a violent, substance-abusing criminal can find God and end up running his own church back home while he rallies the support of freedom fighters in Sudan to rescue hundreds of children from Christian-fundamentalist rebels seems just a little far fetched. But still photographs and excerpts of home video over the closing credits add credibility to the tale, as we see the real Sam Childers and his family with their fellow fighters – and with the children. One problem is that these real-life images do tend to tell a slightly different story to the one Gerard Butler and Marc Forster are giving us, and it does feel, perhaps, like Childers’ telling of his own story might be a little more Boys’ Own and less Save The Children. The truth is probably somewhere in between.
It’s always tough to criticise the characterisation in a film which claims to be true to life, but Machine Gun Preacher is peopled by caricatures – the trailer-trash neighbours, the holier-than-thou Christians who leave the trailer-trash to their own devices, the Hell’s Angels, the wife who’s initially supportive before developing doubts, the daughter who feels neglected, the ruthless rebels who use children as weapons and the kindly, honorable freedom fighters who put their own lives on the line to save the children.
Life really can’t be that black and white, can it? We don’t actually find out the real reason behind the civil war. How different might things have been had our born-again hero’s first encounter in Uganda been with members of the Christian fundamentalist LRA? Might he have ended up using his firearms skills and religious passion to spread the word of God and accept the collateral damage that ensues?
The brutality is shocking and much of the story is heart-breaking. But this was the case beforehand and will continue to be, if not in east Africa, in plenty of other theatres of war, in perpetuity. Perhaps that is the real message of this film.
Captions at the end tell us the current state of play, which I won’t spoil for you – but suffice to say, it makes you doubt the long-term efficacy of Sam’s efforts. Certainly, to have saved as many children as he did is admirable and it would perhaps have been unreasonable to expect him to win the war single-handed, but one over-riding feeling when you watch the film is to wonder – in truth – how much difference did he really make? Aid organisations were already there and still are. The Sudan People’s Liberation Army was already fighting and still is. His presence might even have created more animosity between the warring factions because of his high-profile intervention; you can almost imagine the freedom fighters, in truth, shouting Max Bialystock’s refrain from The Producers – “Don’t help me!” That’s certainly the response he gets from the aid agencies.
While honorable in his intentions, the actions of Sam Childers seem misguided; while it’s unclear to what extent his intervention truly helped the Sudanese people, the one thing that is clear is the extent to which his absence wreaked devastation on his family and others in his home town. You can’t help uttering the title of Childers’ book on which the film is based: “Another man’s war.”
But while it’s not my job to sit in judgement on Sam Childers, a reviewer is entitled to argue that selling a morally dubious thrill-seeking megalomaniac as an unchallenged hero figure is perhaps, at the very least, a little irresponsible.
And on one level, it’s a thrilling against-the-odds tale of a man who turns his life around and returns the favour to the world by putting his life at risk to help people. It’s also interesting that by the end of the film, our protagonist has lost his newfound faith, but continues his mission despite this. Sam Childers’ story – and this film about it – is worthy and even admirable. But it’s not an example anyone should follow and as such, it’s probably not a case of practicing what you preach.