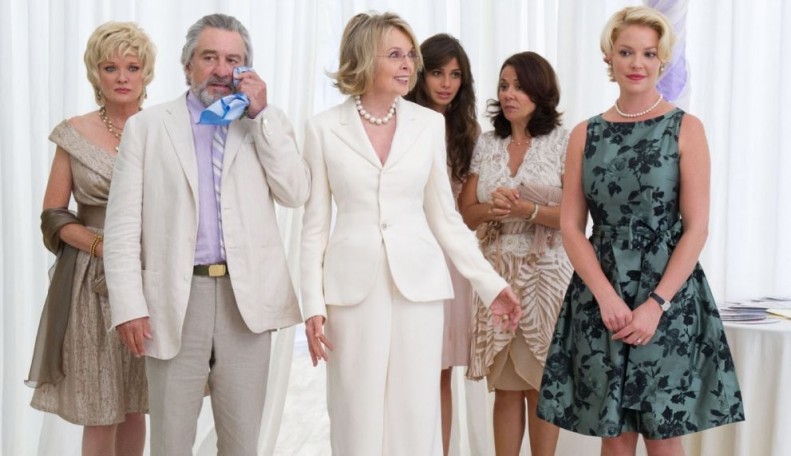 What could be happier than seeing your son marry a gorgeous young woman from a well-to-do family?

Don (Robert De Niro) and his wife Bebe (Susan Sarandon) are preparing their house to host the big wedding of the title; his adopted son Alejandro (Ben Barnes) is to marry Missy (Amanda Seyfried). One of the first to arrive for the festivities is Don’s first wife, and Alejandro’s adoptive mother, Ellie (Diane Keaton).

Now – pay attention. Alejandro isn’t at all religious, but he has to persuade the priest (Robin Williams) that he is so that he’ll marry them. His birth mother, a devout Catholic from Latin America, has been invited, and simply wouldn’t approve of attending a wedding hosted by a divorced man and his second wife, so – obviously – Don and Ellie have to pretend that they’re still married for the weekend, while Bebe has to retreat into the shadows.

What could be happier than having to pretend you’re still married to your ex-wife so that your adopted son’s birth mother isn’t offended when she attends the wedding you’re hosting?

This is clearly meant to be a romantic comedy with a number of stories running in parallel, each of which is meant to be charming and hilarious. The problem is that almost without exception, every last gag falls flat. One of the biggest issues is that the target audience isn’t clear; the scenes involving the older generation would feel more suited to middle aged or elderly viewers, while the younger characters would be of more interest to people of their own age, but the film as a whole is unlikely to appeal to anyone.

Katherine Heigl stole the lime-light with a terrific comic turn in Knocked Up, but since then, it’s been a downward spiral for an actress who’s appealed increasingly to the lowest common denominator.

Here, her character is as unsympathetic as her side-story is predictable. Other plot twists sway violently between obvious and disdainful. Topher Grace is charming enough, but his character is removed enough from the main story that his talents are wasted and completely unable to rescue an embarrassing mess.

From the moment the key plot-point kicks in – forcing Robert De Niro and Diane Keaton to pretend to be married again – the film collapses into a shameful farce. In this day and age, it’s just too much of a stretch to believe that anyone who would give up their son for adoption in another country would refuse to attend his wedding if the adoptive parents divorced – but of course the farce doesn’t end there. When secrets about the past lives of other supporting characters start to emerge, they’re either unbelievable, pointless or unbelievably pointless.

Susan Sarandon is perhaps the most sympathetic and interesting character, and Diane Keaton is her usual la-di-dah self. And while Robin Williams fails to lift the mood with his cameo, the biggest disappointment is seeing an actor of the stature of Robert De Niro lowering himself to such depths again. Since he turned from the young man of drama to the old man of comedy, his career has followed a downward trajectory much like Heigl’s with only the odd satisfying blip in that trend, such as last year’s Silver Linings Playbook. It’s increasingly looking like De Niro the star passed his sell-by date with the close of the twentieth century.