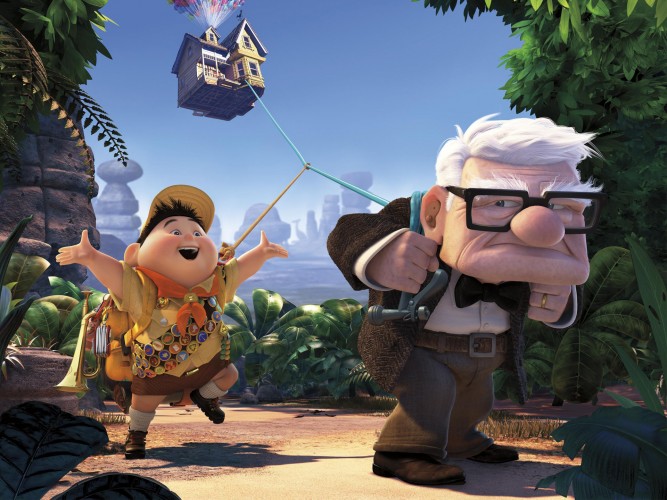 As a young boy, Carl Fredricksen (Jeremy Leary) saw himself as a bit of an adventurer, looking up to his hero Charles Muntz (Christopher Plummer) who disappeared in a cloud of controversy when one of his great discoveries was proven to be a fraud.

They became friends and grew up to fall in love, marry and dream of travelling to South America and setting up home beside the beautiful Paradise Falls.

But the years caught up with them. Carl (now voiced by Ed Asner) outlives Ellie and he finds himself a ratty, lonely old man, living in the house they shared, which is now in the middle of a modern development and the builders are keen to evict him.

One day, a young scout (or equivalent!), Russell (Jordan Nagai), knocks on his door, begging him to let him help him (so that he can get his “assisting the elderly” badge.

As the builders prepare to move in, he decides to make his escape – he ties hundreds of balloons to his house and he just floats away.

There’s a knock on the door. Russell was loitering on the veranda when the house took off, so Carl has no choice but to let him come along for the ride.

The cranky old man and the enthusiastic young boy head off to find Paradise Falls, on the way, meeting friendly giant birds, fearsome talking dogs and a bitter old adventurer, determined to clear his name.

He had to wait seventy years, but Carl finally mellows as he gets the adventure he’s craved his whole life.

Pixar’s latest feature is as delightful as you would expect from this most reliable of cinematic stables.

This is an unusually emotional film, from Pixar. A ten minute sequence, as we see Carl and Ellie fall in love and age until death do them part, will produce tears. And many viewers will identify with Carl’s frustration and exasperation at reaching his twilight years, without having got anywhere near to achieving any of his ambitions – a long, happy life, ending with a long, miserable, lonely, regretful death. This is compounded by the arrival in his life – and refusal to leave it – of a young boy, full of the exuberance of his own childhood self.

For Russell, there’s the wide-eyed innocence of an idealistic young child, who has no idea of how difficult life can be – we feel sorry for him, being unaware what troubles and disappointments lie ahead – but our own spirits are lifted as we see his determination to reject any idea of failure. Oblivious to how unlikely success is in his mission, Russell gives us unbridled hope.

Having got off to a slow start as the two characters are introduced, we find ourselves on a roller-coaster ride of flying houses, talking dogs and mad scientists, as our odd couple and their growing band of companions search for their Shangri-La.

The young boy has no idea how his charming and innocent persistence is slowly wearing down the bitter old curmudgeon. There’s much in this relationship that mirrors the rarely-seen cross-two-generational relationship recently seen between Michael Caine and Bill Milner in Is Anybody there?

But while this film is definitely warm, it’s nothing like as humorous as Pixar’s previous outings. The gags are aimed at the children, while the adults have to make do with the emotion.

The action will appeal to the children too, but it has nothing like the excitement that an adult will need to keep them going. The story at its heart is sadly rather pedestrian and formulaic. The situations and the supporting characters are largely silly, rather than charming – the stuff of Hanna Barbera cartoons, rather than the big screen spectacles recent feature animations have spoiled us with.

For the under tens, this could quite possibly be one of the best films of all time. But for adults, while the characters will make you weep, the faultless animation will make you gasp and the gentle humour will bring a smile to your face from time to time, the most enjoyment grown-ups will get from this film is watching the delight it brings to their children.

But that’s worth going to the cinema for, right?