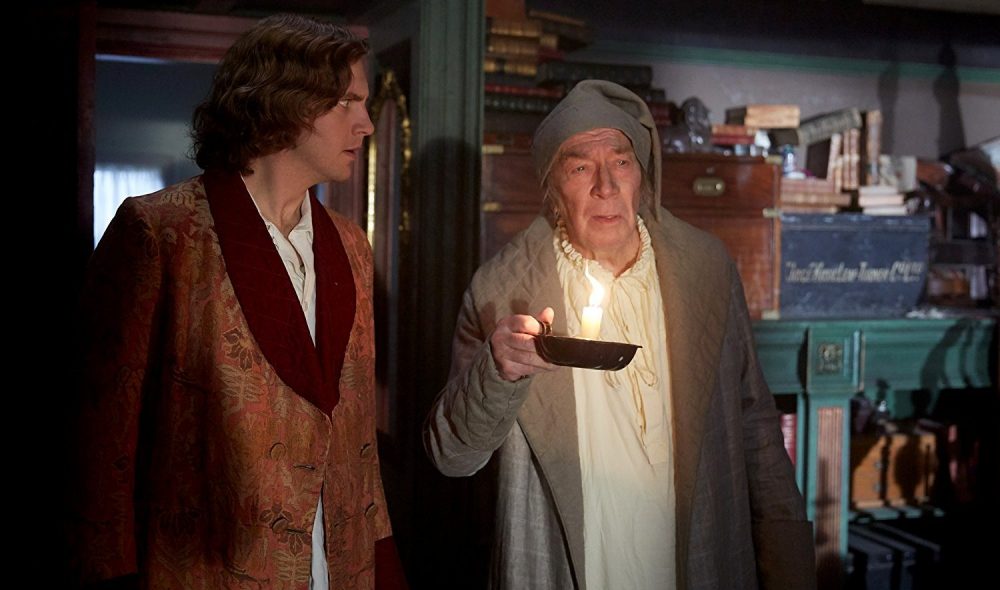 In 1843 London, Charles Dickens (Dan Stevens) is desperate to return to the heights of Oliver Twist; the three books he’s published in the sixteen months since its success have bombed. He’s struggling to make ends meet and needs to strike a book deal fast.

His publishers agree to give him an advance – but he doesn’t have any idea to what to write about next. Having his needy father (Jonathan Pryce) invite himself to stay and trying to deal with decorators only piles on the stress.

But when he hears the new nanny, Tara (Anna Murphy) enchanting his children with a ghostly tale, his mind starts to tick.

People he meets and things he sees give him ideas for characters, names and plot points and before long, A Christmas Carol is coming along nicely.

But this is a book that must be published in time for Christmas, and he’s rapidly running out of time – and with everyone from Tara to his business manager John Forster (Justin Edwards) advising him that Scrooge can’t let Tiny Tim die, he’s suffering from the most frustrating writer’s block of his career.

Dan Stevens is perfectly likeable as a Charles Dickens, struggling to follow-up the success of Oliver Twist. The film portrays the frustration and elation of the creative process in a lightly entertaining way but it doesn’t feel particular authentic.

Collecting interesting names you encounter and writing about people you meet and things you see might seem like standard tools for a writer – and if he’s using them now, why didn’t he use them for his previous three flops – and if he did use them then, why would this book be any better?

Although the idea of seeking inspiration from everyone and everything around him is by no means a fresh idea, it’s initially engaging as he starts to come up with names and events that will be familiar to anyone who knows the book. But soon, as he’s drawn further into his story, the suggestion is that the characters themselves start to take over and write their own plot – and this is how it’s presented to us, with Dickens discussing with Scrooge (Christopher Plummer) where the narrative should go and the various ghosts showing him the same events that Scrooge will encounter in the novel.

There are also a handful of flash-backs to his own childhood which do more to explain his frustration with his father than help him write his next great work.

The clean and prosperous London that this Charles Dickens inhabits doesn’t seem particularly Dickensian and while he’s constantly frustrated by his Dad needing money and everyone he knows trying to give him advice, there’s a big supporting cast of largely uninteresting characters and the main antagonist in this story is the clock, ticking down to Christmas, but a “race against time” sub-plot doesn’t sit comfortably in a film about the creation of one of the best-loved Christmas tales of all time.

The production design and cinematography are among the highlights of this film, which has a genuinely Victorian feel to it, skilfully brought to live through some nifty camera work.

It’s gently entertaining but becomes somewhat tiresome as it trundles towards the inevitable denouement – we all know he gets it written, as we know the book – and much of the story-telling itself feels a little twee, uneven and sometimes even pointless.