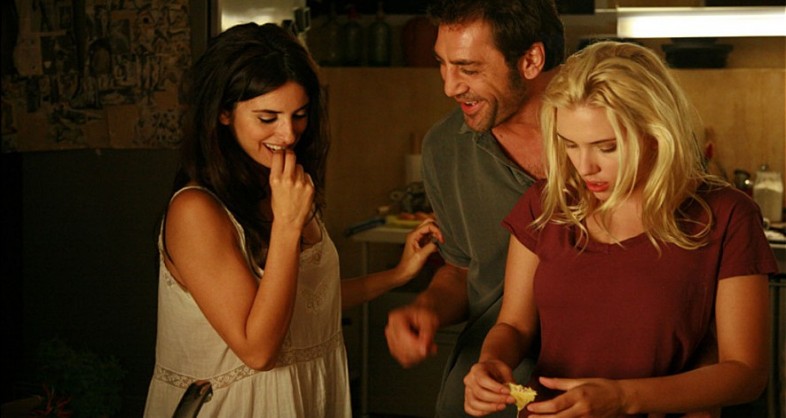 Vicky (Rebecca Hall) knows what she wants – her fiance Doug. Cristina (Scarlett Johansson) knows only what she doesn’t want – to settle down with one guy.

They head to Barcelona to spend the summer with Vicky’s older friend Judy (Patricia Clarkson).

After visiting the opening of an art exhibition, Vicky and Cristina are enjoying dinner when the painter, Juan Antonio (Javier Bardem) approaches their table and invites them to spend a weekend with him, eating well, drinking good wine – and making love…in Oviedo, five hundred miles away.

The prospect excites Cristina and – well – Vicky can’t let her go alone, now, can she?!

After some initial antagonism between Vicky and Juan Antonio, the painter gets together with Cristina, but when she comes down with a bug, Vicky warms to Juan

Antonio – rather too much for a woman who knows that all she wants in life is her fiance.

Talking of Doug, he comes out to visit – and bring forward their marriage – something Vicky’s suddenly not so sure about.

Cristina, on the other hand, moves in with Juan Antonio, where everything is fine, until his paranoid, suicidal, formerly-knife-wielding ex-wife Maria Elena (Penelope Cruz) comes back into his life.

As you might expect, several whirlwinds of emotional turmoil are whipped up in a comedy of manners that sees Woody Allen return closer to his early career high than he has been for years.

Along with Melinda & Melinda, this is really the only Woody Allen film of the naughties that’s worth checking out – and it is definitely worth a look.

The four leading performances, without exception, hit the button – believable and heart warming, every last one of them, regardless of the changing moral palette that pervades the film.

Allen‘s writing is as sharp as ever, and the twists and turns – while not always surprising – are entirely convincing in the inevitability of the crumbling of everyone’s comfort zones and their consequent reassessment of their lives.

But enjoyable as the film is as you’re watching it, it’s almost instantly forgettable afterwards and surprisingly unsatisfying.

Emotionally, it doesn’t really stick with you, because of the two eponymous characters, one doesn’t really change her outlook and the other’s life-view changes in a negative way. As such, the film ultimately plays more like a tragedy than a comedy, which isn’t particularly a surprise for Woody Allen – but it’s not how the film is being sold, so it could come as a disappointing twist for those expecting more of a – to use one of his own titles – Hollywood Ending.

Perhaps it could – and should – be seen for the downbeat realistic fatalism that Allen might be expected to deliver.

One thing he certainly has delivered – is another Oscar nomination for a supporting actress. Penelope Cruz is certainly in with a good chance of following Mira Sorvino and Dianne Wiest in taking the statuette for bringing Allen‘s vision to the big screen.