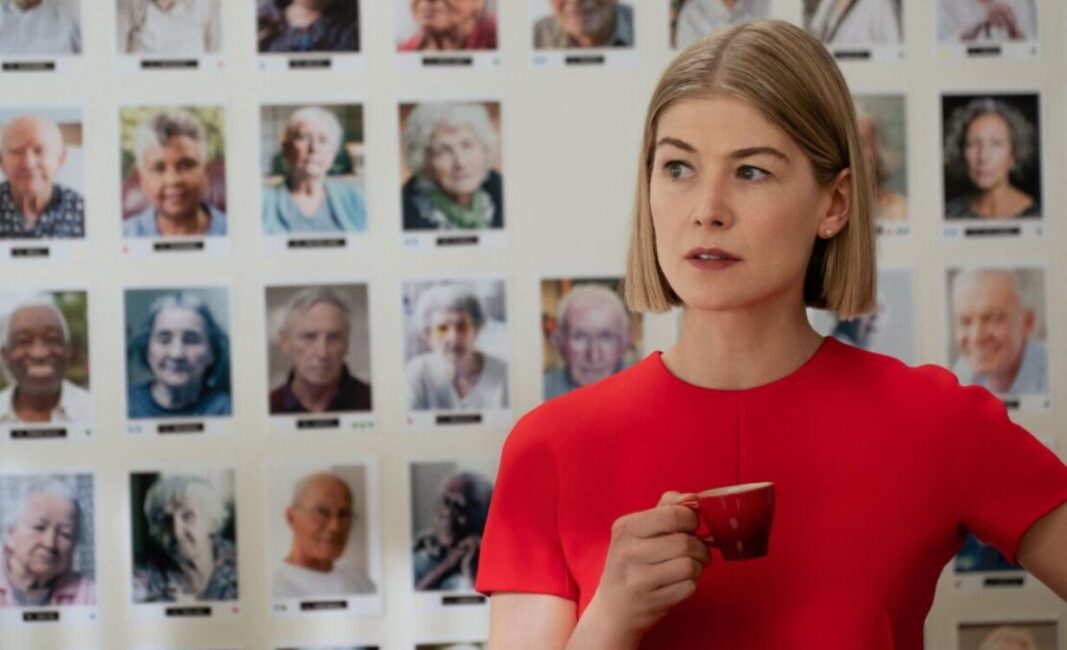 Marla Grayson (Rosamund Pike) is a court-appointed guardian to vulnerable people, managing their estates and making decisions about their welfare while they’re in care.

She cares a lot – but there’s no altruism here. She cares about their money. She preys on wealthy individuals with no family or friends to look after them, tipped off by a crooked doctor and then sweet-talking a rather too trusting family court judge.

Once her “cherries” are safely locked away in a care home, she sells their homes, steals their savings and enjoys a life of riches with her partner in crime – and love – Fran (Eiza González).

But with her latest charge, Jennifer Peterson (Dianne Wiest), she seems to have bitten off a little more than she can chew. Jennifer turns out not to be as unencumbered by relatives as advertised and someone who could make Marla very “uncomfortable” is prepared to do whatever it takes to get back his mother – and the gems she’s been hiding for him.

J Blakeson rose to prominence with a taut three-handed thriller, The Disappearance of Alice Creed, way back in 2010 and then he disappeared again. It’s been a long wait to see his imagination back on the big screen and it’s worth the wait – if you have quite a strong stomach.

Rosamund Pike’s thief – squeaky clean to the authorities – is every bit as ruthless as her unexpected antagonist, Peter Dinklage’s Russian mafia boss – as both deliciously chew up the scenery with every line, glance and gesture.

The twisty plot will keep you guessing until the end – you’ll bite your nails, shout at the screen, wince with fear and gasp with anticipation.

But there are moments where the nihilistic narrative goes just a little too far – or doesn’t feel natural in its progression. These are not uncommon for darkly comic crime thrillers.

The problem here is that Marla is so unrelentingly money-grabbing and lacking in morality that without question, audiences will be rooting for the mafia boss, who just happens to be unlucky enough to find his mother caught up in Marla’s latest scam. It pushes moral ambiguity so far that there’s not really anyone to root for.

This sets up a situation where most viewers will be wishing for Marla to get her comeuppance, which makes for an odd dynamic and leaves a rather sour taste in the mouth for a little too much of a film that cheekily presents itself as a bright, chocolate box confection.