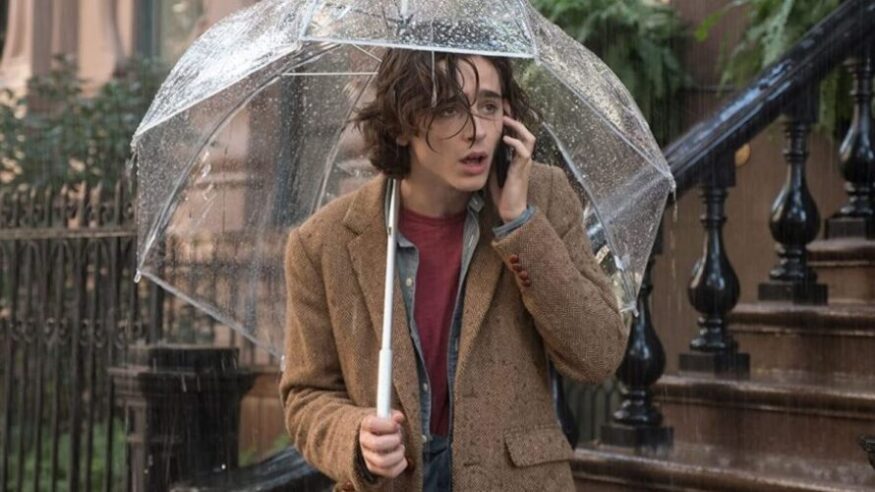 Ashleigh (Elle Fanning) is an upstate New York university student, from a wealthy banking family in Arizona. When she’s offered an interview for the campus newspaper with the renowned film director, Roland Pollard (Liev Schreiber) in Manhattan, her boyfriend Gatsby (Timothée Chalamet) is only too pleased to accompany her, so they can turn the trip into a romantic weekend away in his home city.

The middle-aged Roland, taking a fancy to the naively sweet Ashleigh, decides to give her a scoop – he isn’t happy with his latest film. She can’t believe such a genius could do any wrong, so he invites her to a private screening to show her how bad it is. There goes lunch with Gatsby.

Not that Gatsby hasn’t has a busy morning himself; he bumps into old school friend Josh (Griffin Newman) who’s making a film and happens to need an extra to kiss his lead actress, Chan (Selena Gomez), who turns out to be the younger sister of an ex-girlfriend. Gatsby doesn’t feel at all comfortable kissing her – he has a girlfriend.

Before the day is out, starstruck Ashleigh finds herself in the sights of two more influential, older, film figures – a screenwriter (Jude Law) and a lascivious leading actor (Diego Luna) – while Gatsby ends up having to find another woman to take to his filthy-rich parents’ posh party.

With their romantic weekend away not going quite to plan, the couple find themselves reconsidering what it is they want out of life.

With nearly fifty films under his belt – including a number of enduring comedy and drama classics – you’d think that Woody Allen would know a thing or two about how to make a light and fluffy Manhattan-set romantic comedy-drama.

Perhaps he’s been distracted by the drama in his own life, because what he’s delivered here is sadly not funny, dramatic or romantic. It’s harmless enough. It’s not bad. But in truth, it’s just a lazy, box-ticking exercise.

White credits on black over a jazz soundtrack, beautiful New York cinematography, zippy dialogue bouncing off cultural references, every character – almost without exception – being an archetype we’ve seen many times before, in Allen’s films and others.

Timothée Chalamet does a perfectly good impression of a twenty-something Woody Allen, a neurotic intellectual Manhattanite, who shares everything from the director’s gesticulation to the clipped delivery of his somewhat dated one-liners; would a modern-day youngster refer to someone as looking like Yasser Arafat? Elle Fanning is a cute and ditsy star-struck blonde. Liev Schreiber is an ageing film-maker with a penchant for younger women – as are Jude Law and Diego Luna. And Selena Gomez is a smart talking brunette, who matches Gatsby quip for quip.

From the moment the couple at the heart of the film spin off on their own series of misadventures, the plot crumbles into a sequence of coincidences – guess what Roland’s first wife’s name was – does it seem likely that Gatsby will stumble across a school friend’s film-set, which is short of an actor – you’ll never guess who Gatsby just happens to bump into when he’s jumping into a yellow cab to escape the rain – Ashleigh and Ted just happen to be driving past an apartment building as someone who shouldn’t be there is walking out – and wouldn’t you know, when Gatsby is trying not to let his parents know he’s in town (population more than 8,000,000), he bumps into relatives who’ll be at their party, later that same night. And those are just for starters.

A few contrived plot points can be forgiven if the director already has you on side, but it’s hard to identify with a pretentious bratty rich-kid from the outset, it’s difficult to root for a woman as shallow and naive as she needs to be to nudge the plot along, both flip between being loyal and fickle as the plot requires and it doesn’t help that we stumble across a film-set that would suggest the director has never seen a film-set before in his life. That’s at least something you’d think Woody Allen would get right. And it’s been a while since a less convincing journalist has appeared on screen.

It might seem odd, after all that, to note that if you take a step back and eliminate any expectations, A Rainy Day In New York is a perfectly easy watch, with energetic performances delivering a snappy script – it could almost be quite enjoyable on a rainy day in (your home city here). It’s only when you start to think about what you’re watching that nothing feels remotely believable – and not in a cute fantasy way. It feels like Allen has come up with a few good ideas and tried to squeeze some of them into the wrong film.

There are gags that work – there are plot points that ring true – there are themes that are worth exploring – but there’s not enough for one film. This makes you wish the master of old wouldn’t press on with a film a year and would, instead, wait until he’s written a bit more, from which he can choose the best bits – or the elements that work best together.

As the closing titles roll, you’re left largely with a feeling of disappointment – you’ve put faith in Woody Allen and his impressive ensemble case – and they’ve let you down.