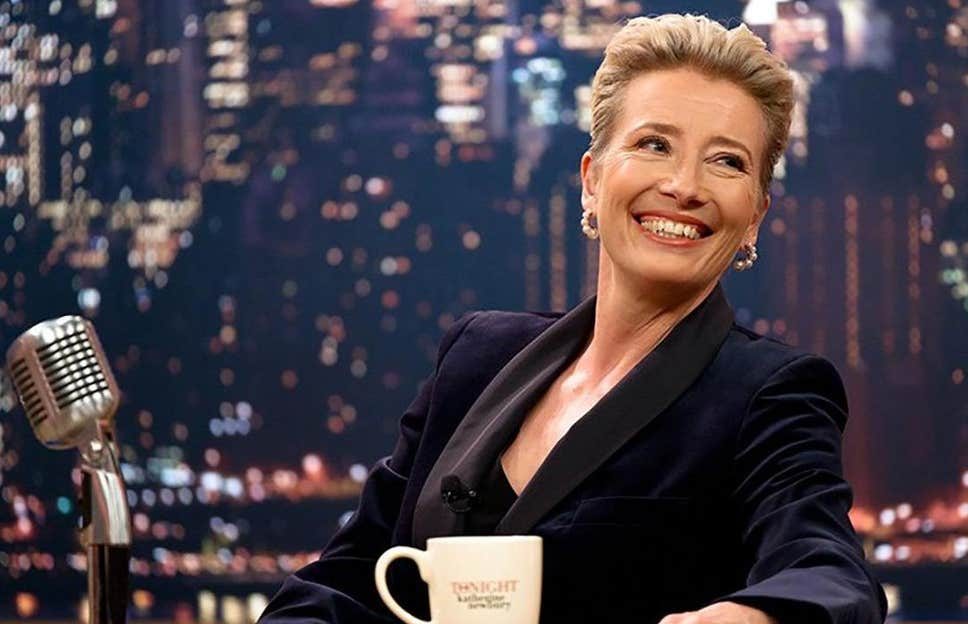 Award-winning late-night TV chat-show host Katherine Newbury (Emma Thompson) is knocked off her perch when the new network boss (Amy Ryan) informs her that she’s being pulled off air after nearly three decades because of falling ratings.

Determined to keep her slot, she concedes that to make her show more relevant, she needs to freshen up the writers’ room and orders her producer Brad (Denis O’Hare) to hire a woman.

Enter Molly (Mindy Kaling), an Asian-American quality control officer at a Pennsylvania chemical plant, whose only experience of comedy is trying to entertain colleagues over the public address system.

The all-male, all-white writing team don’t know quite what to make of the new addition to the team and Molly is determined to show the industry that she’s more than just a “diversity hire.”

Can Molly hold her own in the writers’ room and save the dinosaur of late-night TV from extinction?

Late Night is a film that has a lot to say about the entertainment industry – particularly as it struggles to deal with #MeToo and diversity issues – but most of what it says is mixed up, inconsistent, unbelievable and flat.

Written and produced by Mindy Kaling, who plays the central character of Molly, this purports to describe many of her own experiences of being the only woman in the writers’ room.

But despite her rise to prominence as a writer on the American version The Office, too much of this film feels arch and constructed. They’re so desperate to have a woman on the team that they hire the first unqualified woman who walks in through the door? Is Kaling herself suggesting that there are genuinely no talented comedy writers in the business?

As the film opens, Emma Thompson’s Katherine is being honoured for her contribution to comedy, which makes the following scene, in which she’s essentially fired for being old, dull, out-of-touch and suffering a long-running fall in ratings, seem a little off kilter. Perhaps this is a sly nod to the fact that lifetime achievement awards often come as a career is shuddering to a halt – but more likely, as with too much in the film, it’s a quick bit of short-hand exposition to alert us to the facts that firstly, she’s a powerful and successful star and secondly, there’s always another powerful and successful star hot on your heels.

In truth, it doesn’t seem that surprising that a chat-show scheduled for the most competitive entertainment slot of the day might struggle when most of the guests are high profile female intellectuals rather than the celebrities who appear on rival networks. But that’s not a problem with the writers’ room being too male and too white. The problem is with the host’s choices of guest and her refusal to dumb down to – or at least open up to – the audience. It’s here, rather than in any gag-writing, that Molly succeeds – her fish-out-of-water inability to judge the mood of her contemporaries affords her the luxury of being able to tell it how it is and coax out the real woman from deep beneath Katherine’s self-important surface.

It’s slightly odd to make a film about the difficulty of women to progress in the entertainment industry when both the celebrity and the studio head are women – and even explaining that Katherine feels threatened by having successful women on her team doesn’t quite ring true.

There are fun asides – the supercilious Katherine is far too busy and important to meet or get to know her writers so when circumstances require her to talk to them, she refers to them by numbers – but pointing out how removed she is from those around her – and indeed from her prospective audience – does little to help viewers of the film warm to her. She clearly has fun in the role, but the way she flips from diva to devoted wife never quite feels consistent.

This is a film that proudly – and rightly – condemns box-ticking, but it does so by ticking boxes. In trying to tell us that it doesn’t matter if you’re male or female, white or minority, if you’re good, you’re good – but then goes on to conclude that you need a good diversity mix in your writers room.

Most criminally, it’s a film about comedy – and most critically about how this particular woman can hold her own, despite having had no experience, among the most successful writers in the business – and we see her write only one joke. Molly is never particularly funny – neither in the writers’ room, nor in her everyday life – and in a film such as this, you can’t tell the world “this woman is funny” and fail to provide any evidence.

She’s at her best in providing analysis of why Katherine’s show is slipping down the ratings, her genuine quality control skills from her previous job, but as for displaying the qualities required by her new line of work, we never get to see it.

There’s none of the rat-a-tat pizzazz of Tina Fey’s head writer on 30 Rock or the deadpan wit of Catastrophe’s Sharon Horgan, among others. The film is telling us that women can be funny too – but it’s not showing us.

Similarly, as an award-winning comedian and star of late-night TV, you would expect Katherine to be able to dazzle the world with her words, so when the narrative requires that a monologue is particularly profound, we shouldn’t have to work out that she’s hit the nail on the head from from the reactions of the crowd – the monologue has to be profound.

A good case in point is a scene in which both Molly and Katherine find themselves alone on a stage, addressing a comedy audience – the audience is impressed, but only because the director has told them to be, because there’s nothing clever or charming about what they’re hearing.

There’s also little made of the fact that she’s not only a woman, but she’s not white – she seems to be more frightened of attacking whites than men; but we’ve already seen that Asian Americans can be funny, because Kumail Nanjiani gave us a warm and witty comic in his self-penned The Big Sick.

And in this post-Me-Too world, in which it’s important to show women that they can climb the ladder based on talent alone, we see Molly flirt with one relationship and fall into another. Perhaps Kaling is saying that feminism is about choice – and it was Molly’s choice to look for and eventually find a boyfriend – but it feels a bit cloying and inappropriately formulaic.

Perhaps Mindy Kaling is frightened of biting the hand that feeds her, because to do the job she is supposedly trying to do, it would not have been too difficult to suggest that the Tonight show’s falling ratings were down to the white, male dinosaurs in the writing room and a witty woman could have stepped in and rejuvenated attitudes among the staff. But Late Night turns out to be more about how the newcomer rejuvenates the woman at the helm, having very little effect on the whiteness and maleness of those around her.

A film that’s supposedly telling us that women can be funny and profound on their own merit does so by showing us women who are neither funny nor profound and who get their break as a result of being a diversity hire and progress only when men support them.

Perhaps the real message to come from this – reading between the lines – is that there’s still a long way to go – although it’s presented as the finished product.