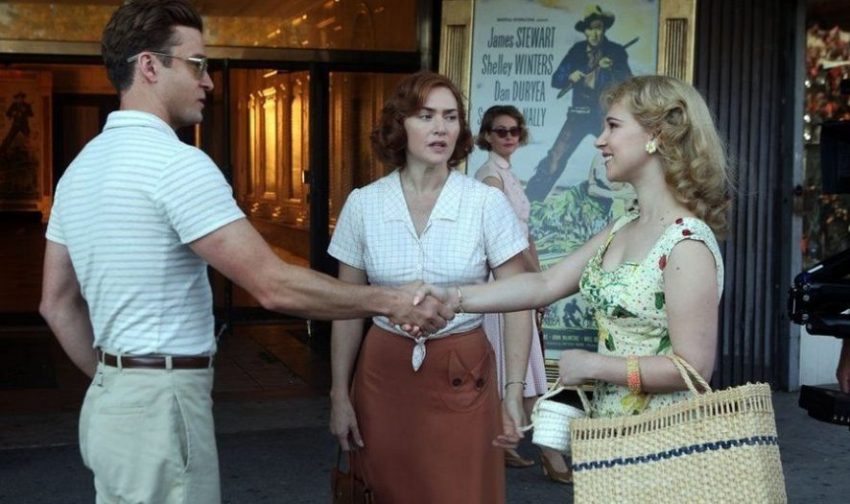 He doesn’t take too kindly to her return; she left home to marry a gangster, but having fallen foul of the mob, she’s now trying to escape their clutches.

Humpty’s new wife Ginny (Kate Winslet) used to harbour dreams of being an actress but is resigned to her job as a waitress, finding excitement in her life elsewhere; she’s having an affair with a local life-guard, Mickey (Justin Timberlake), an aspiring poet.

With so much simmering under the surface, this dynamic can’t remain peaceful for long…

Does anyone even care what this film is about – or indeed what it’s like? This was the last Woody Allen film made before the Weinstein controversy fell, like a dark cloud, over Hollywood – and it’s the first to be released since the scandal was accompanied by a repeat of historic abuse allegations against Allen by his daughter Dylan Farrow.

While stars of his next film have already announced that they’re giving their salaries to charity, so as not to be tarnished by the claims against Allen – which he denies and which the police found insufficient evidence to prosecute – Wonder Wheel was a little more sheltered from the outcry.

But few people with any interest in the industry will have missed Kate Winslet’s comments, as she collected a life-time achievement award from the London Film Critics Circle in January, that she regretted having worked with directors whose names have been linked to alleged sex-offences – she didn’t name names, but she received a Golden Globe nomination for Roman Polanski’s Carnage and, of course, plays the central character for Woody Allen here.

So – there’ll be those who’ll boycott this film because of its director, regardless of how good or bad the reviews suggest it might be. And there’ll be those die-hard Woody Allen fans whole take their annual dose of the prolific auteur, despite the cloud that’s rightly or wrongly hanging over his head.

For what it’s worth, aiming to release a film every year is a remarkable feat – particularly for a man of Allen’s age – but inevitably, the more thinly you spread your talent, the less there is in each film to crow about.

And in truth, there doesn’t seem to be much fresh here at all.

We have unhappy marriages, infidelity, budding or failed creatives , a beautifully shot part of New York that’s not often seen on screen, but New York nonetheless – there are cross-wires, betrayals, jealousy, secrets, mix-ups – themes we’ve seen many times before, whether from Allen himself or others.

The screenplay is riddled with exposition and Belushi in particular, but to a lesser extent Winslet too), deliver their lines as if they’re on stage – to the extent that you often feel Allen has just set up a camera to film a theatrical production of an Arthur Miller play.

It’s impassioned and earnest, with unhappy characters declaring their despair while hopeful characters pronounce their optimism, but it’s hard to make an emotional connection with any of them and having the story narrated by Justin Timberlake’s life-guard, with frequent comments to camera, feels like a gratuitous directorial flurry that adds nothing to the narrative, while breaking the flow.

Where the plot isn’t nudged forwards by extraneous dialogue, it’s often contrived to the extent that you’ll roll-your-eyes at the convenience of characters happening to turn up at the right time at the right place – or just turn up at all.

It’s probably the case that if another director had made the same film, it would have slipped under the radar of most cinema-goers. The way Woody Allen’s career has been going of late, Blue Jasmine aside, even with all the furore over the Hollywood sexual harassment scandal, this film might come with a whimper and fizzle out like a flat can of coke.

For Allen’s fans, Wonder Wheel will be disappointingly underwhelming, for his detractors, it’ll be an irrelevance.