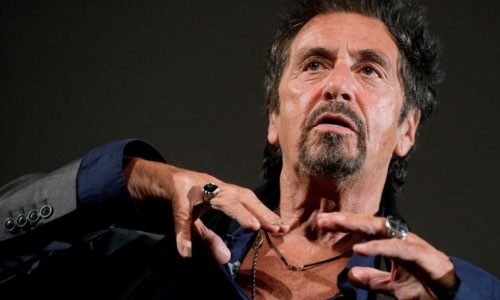 One of Hollywood’s most respected actors, Al Pacino, has been honoured with a BFI Fellowship.

At a ceremony at the Corinthia Hotel in London, Pacino said he was overwhelmed to be given the BFI’s highest accolade.

The chairman of the BFI, Greg Dyke, said, Pacino’s extraordinary body of work had made him one of the most recognisable and best-loved stars of the big screen. “A true icon, Al Pacino is one of the greatest actors the world has ever seen, and a visionary director of stage and screen.”

The Fellowship is awarded by the BFI’s Board of Governors. Existing fellows include the actors Sir Christopher Lee, Helena Bonham Carter and Dame Judi Dench, the directors David Cronenberg, Tim Burton and Martin Scorsese and the actor-director Ralph Fiennes.

With more than forty memorable roles during his career, Pacino is best known to many for the Godfather Trilogy and such thrillers as Scarface, Serpico and Dog Day Afternoon, but after seven Oscar nominations it was a more romantic role in Scent of a Woman that finally won him an Academy Award. The late 1990s also saw a range of well-received performances in films including Heat, Donnie Brasco, Devil’s Advocate and The Insider, followed by his 2002 collaboration with Christopher Nolan in Insomnia.

As busy as he has ever been, Pacino premiered two films at the recent Venice International Film Festival, The Humbling and Manglehorn.

As well as working as an actor and director, Pacino also supports the next generation of stars; he’s a co-president of the Actors Studio in New York, where he studied under Lee Strasberg as a student.