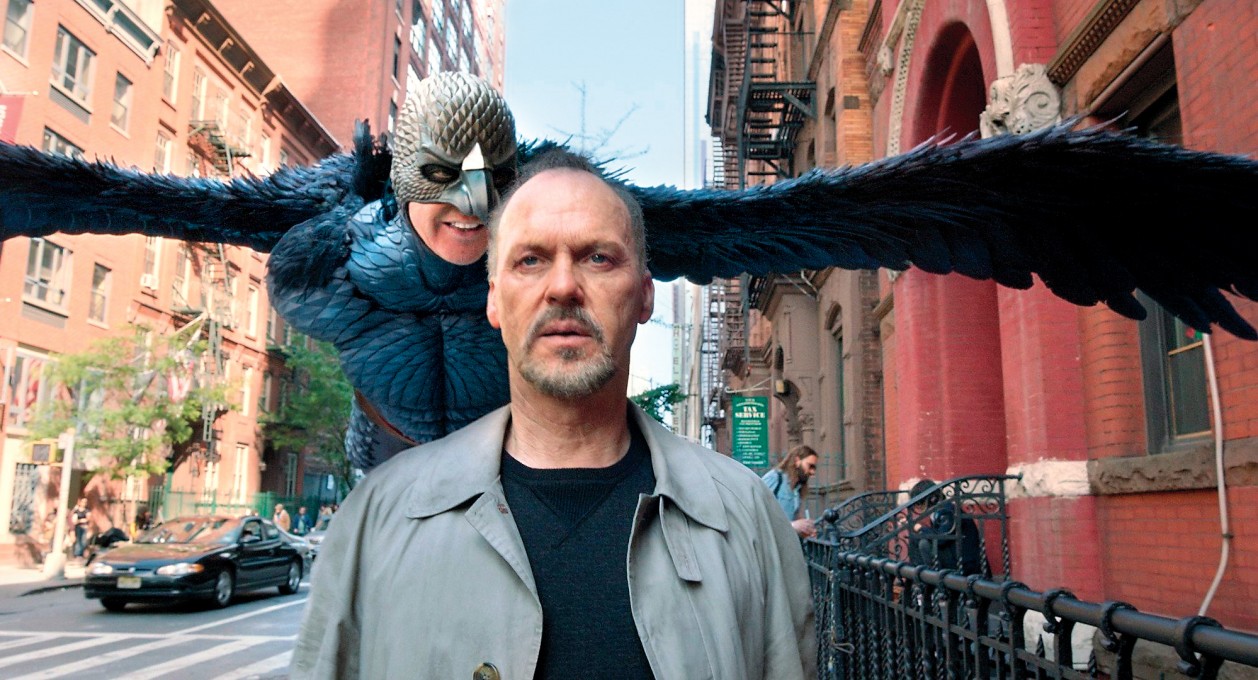 Riggan Thomson (Michael Keaton) is best known for starring as the superhero Birdman in the 1990s, but his career hasn’t really gone anywhere since then. Everyone wants him to do a Birdman 4, but he has other ideas about which creative avenues he wants to travel down.

As writer, director and star, he’s about to open his own adaptation of Raymond Carver’s What We Talk About When We Talk About Love on Broadway, but his main supporting actor just isn’t up to the grade, so his lead actress Lesley (Naomi Watts) calls in her boyfriend Mike (Edward Norton) to take his place.

Mike rubs Riggan up the wrong way and New York’s foremost theatre critic (Lindsay Duncan) has threatened to destroy the production because she doesn’t like big film stars trying to take over the theatre. But his professional worries aren’t his only concern. His ex-wife (Amy Ryan), their daughter (Emma Stone) and his lover (Andrea Riseborough) all have their own issues with him.

Haunted by his most famous character, Riggan does his best to keep his life on track and rejuvenate his career and reputation, with personal and professional pressures and his past and present conspiring to crush his spirit.

Birdman has awards season written all over it, bursting with strong performances, expectedly from Michael Keaton, Edward Norton, Emma Stone and Naomi Watts, but perhaps surprisingly – confident in a dramatic role – Zach Galifianakis. Keaton’s turn is particularly welcome as he returns to the top of the cast-list for the first time in two decades.

It also touches on many of the subjects loved by those awards-giving bodies – the worlds of film and theatre, family trouble and self-doubt, for starters.

The film is an effective satire on the world of entertainment and a warm study of insecurity and regret in ageing.

At times, the drama – both inside and outside Riggan’s head – verges towards the magical which takes the viewer out of the moment and while the film is, overall, rewarding, it’s more a collection of inspired moments than a particularly coherent whole. And while universally impressive, some of the performances feel a little like the actors are showing off – to other actors.

But it’s as much for its technical achievements that Birdman is being recognised – apart from the opening shot and a brief coda, the conceit is that the entire film is shot in one take. It’s not quite, but thanks to such sleights-of-hand as walks down dark corridors or flashes of light, it’s able to conjure up that effect. And borrowing technical tricks from the world of theatre that it portrays, it’s able to show time passing convincingly while maintaining the illusion of a single shot. The cinematography also boasts such skilful choreography as allowing the camera to pass mirrors – one of many elements that will make it more appreciated by industry insiders than by the average cinema-going member of the public.