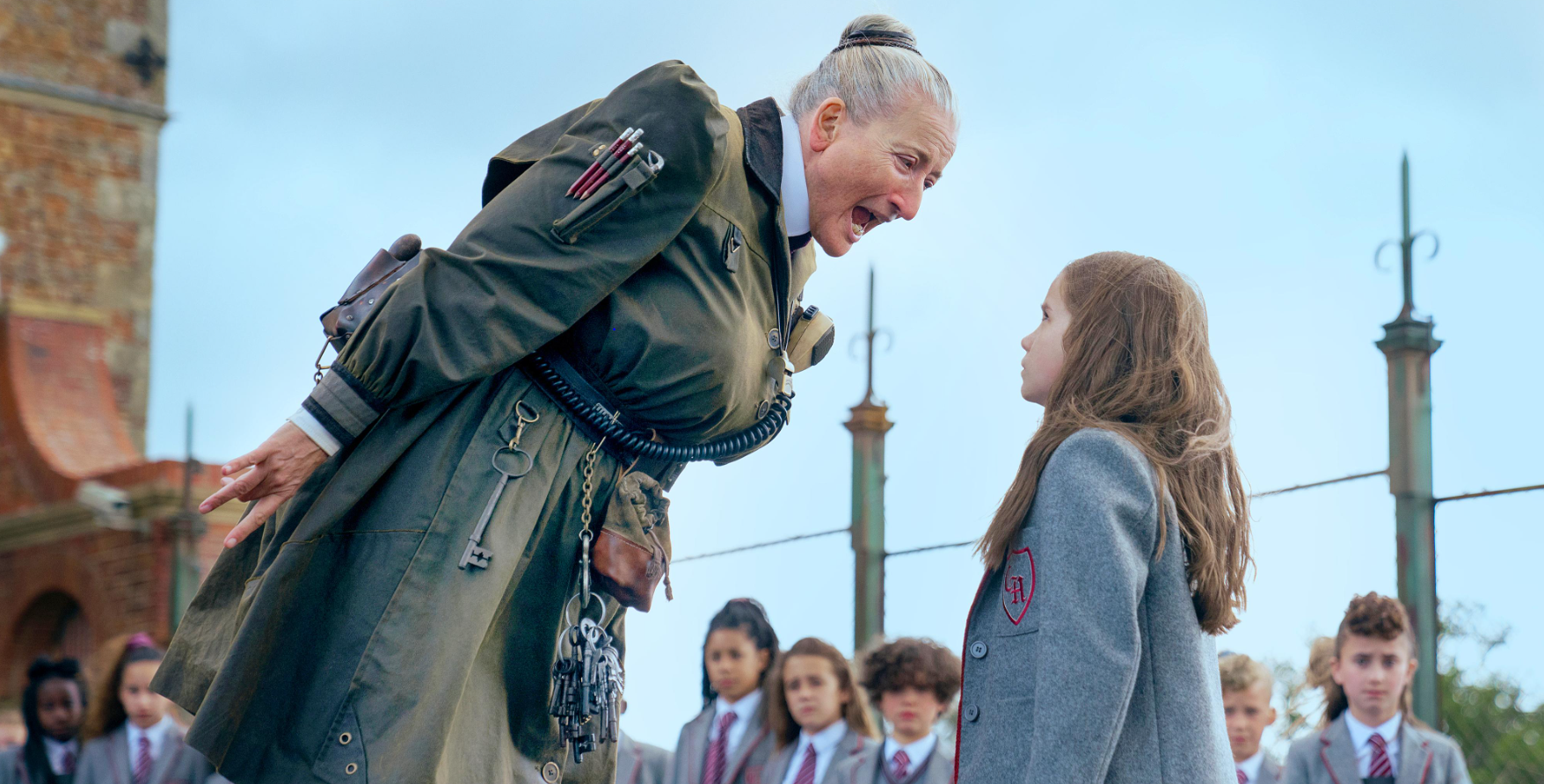 Matilda (Alisha Weir) is a genius – completely self taught, because her hateful, selfish and shallow parents (Stephen Graham and Andrea Riseborough) refuse even to send her to school. They just want her to sit and watch TV all day, ripping up any book they catch her with. They never wanted a child in the first place – least of all a girl.

Her dad is a dodgy car salesman and her mum is an aspiring dancer, interested in nothing but her own appearance.

When social services find out about her, they insist on her being sent to school, but she certainly won’t get the nurturing she needs from Crunchem Hall and its ruthless headmistress, Miss Trunchbull (Dame Emma Thompson) – a fearsome former hammer-thrower, who’s more interested in torturing rats – or children – than educating them.

Matilda spends most of her spare time at the mobile library, and when she’s not reading stories, she’s writing them.

It’s only the support of her caring teacher, Miss Honey (Lashana Lynch) that carries her through each day with any sense of dignity.

As the full title is keen to remind you, this is a screen adaptation not just of Roald Dahl’s classic novel – but of the stage musical version, that’s been a hit both in the West End and on Broadway.

Bar a few tweaks here and there, the basic story has remained intact, as Alisha Weir takes on the central role of a bright young girl who retreats into her imagination to escape the banality and bullying of her everyday life – both at home and school.

With only a couple of bright spots – her teacher Miss Honey and the local mobile library – Matilda’s life is an endless run of disappointment and dissatisfaction, although she’s so strong-willed and independent that she doesn’t seem to be anything like as much of a victim as protagonists in comparable fare; indeed, she’s generally in a better position than most of her class-mates, who’ve similarly had all hope “crunched” out of them, but don’t have the wherewithal to escape the drudgery of their hopeless existence until she comes along to lead them.

Roald Dahl’s Matilda The Musical is blessed by a handful of strong performances from actors playing against type; chief among Dahl’s typical gallery of grotesques are Emma Thompson, unrecognisable as the loathsome Miss Trunchbull, and Scouser Stephen Graham, more used to appearing in heavy dramas, playing a colourful, cockney wiseboy. The foreboding school building itself is almost as fearsome a character is its headmistress. Lashana Lynch is similarly exploring different territory from usual, with her doting teacher far removed from her role as a spy in No Time To Die – to the extent that you have to wonder why such an angel is working in such a hell-house.

As the story unfolds – with the imaginative protagonist doing her best to rewrite her own story – the children carry the narrative through Tim Minchin’s uplifting and highly intellectual songs, only a couple of which – including Revolting Children – are catchy enough for you to take home with you; some are perhaps even too clever to stick in the mind.

It’s also, perhaps, a shame that the villain of the piece doesn’t get a centrepiece song of her own, explaining why she’s lost faith in the very people she’s meant to be helping – humanising the antagonist generally makes them more interesting.

Much of the darkness is inferred, rather than shown, making it more palatable to younger audiences than it might otherwise have been and we’ve seen many other down-trodden children on screen who’ve faced far more adversity than parents who don’t want their daughter to be too bright. She’s fed, clothed and housed, even if her undecorated room is in the attic. And it does, perhaps, get a little carried away with the side-story unfolding in Matilda’s head – it’s a long set-up for a pay-off which doesn’t entirely feel convincing.

But it’s ultimately a heart-warming tale of self-discovery, with rousing songs and performances  that will stick with you – even of many of the highly impressive songs won’t.