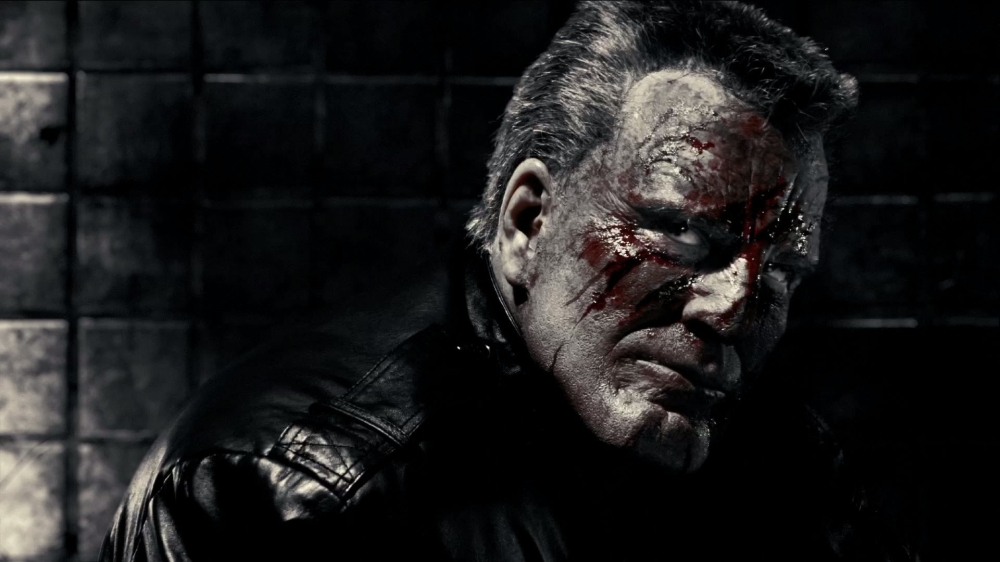 One of Hollywood’s most celebrated multi-hyphenates, Robert Rodriguez, brings some of Frank Miller’s “Sin City” graphic novels to the big screen.
After a brief liaison with Harnett’s gun-for-hire, we meet weathered cop Hartigan (Bruce Willis), who lays his life on the line to save an eleven year old girl from the depraved son of a corrupt senator.
Next, we watch underworld tough-guy Marv (Mickey Rourke) fighting to avenge the murder – for which he’s been framed – of the one woman who’s ever shown him love.
Then we follow Dwight (Clive Owen), as he sets out to defend the dignity of the hookers who control Sin City’s red-light district, when the vicious thug Jackie Boy (Benicio Del Toro) and his gang arrive in town.
Finally, we return, eight years later, to Hartigan’s story, as he unwittingly leads a now hideously disfigured rich-kid, bent on revenge, back to his prey, with disastrous consequences.

Stylised doesn’t even come close to describing this film. It transfers Frank Miller’s comic strips to the big screen almost panel-by-panel, frame-by-frame.
Filmed in high-contrast black-and-white, with only carefully-chosen shots of colour (deep red blood here, bright blue eyes there, yellow gunk elsewhere), its visuals are striking. Use of the occasional silhouette adds to the mood.
Voiceovers and dialogue that could’ve been taken straight out of a 1950s detective novel, flawed anti-heroes, corrupt officials and girls with guns complete the film-noir feel.
It’s a little episodic, in that we follow a series of independent stories, but that they are set in the same city allows characters from one to walk through the others, making it feel like a real world with lots going on.
The stories themselves are formulaic but that’s the nature of the beast – the emotional and visual power is in the way in which they’re delivered – neatly bracketed in recurring lines and themes.
You’ll need a strong stomach to cope with the graphic, comic-book violence and a slightly skewed sense of humour and irony to warm to the characters.
Sin City’s originality is what makes it rise above the current crop of cinema releases – whether they’ll be able to maintain the energy in two planned sequels is debatable.