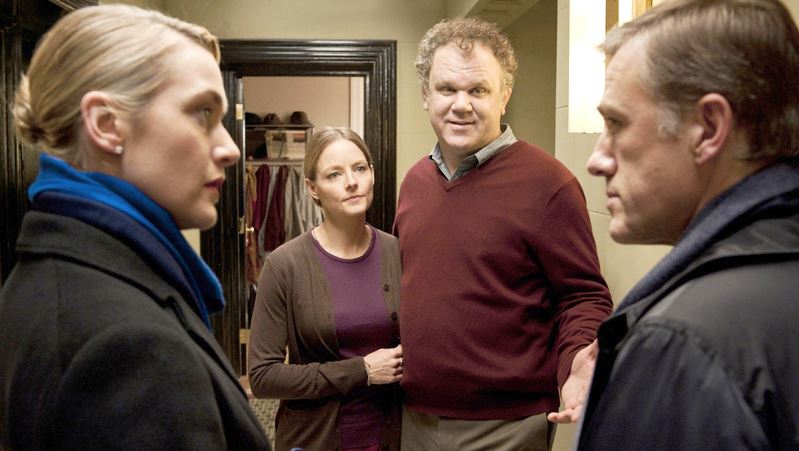 After an argument in a Brooklyn park, Zachary Cowan hits his schoolfriend Ethan Longstreet in the face with a stick.
Ethan’s parents, Penelope (Jodie Foster) and Michael) John C Reilly, invite Zachary’s parents, Nancy (Kate Winslet) and Allan (Christoph Waltz) round to discuss the issue.
Uptight Penelope is concerned that Zachary should apologise and that Nancy and Allan should discipline him. Well heeled Nancy is concerned, but not keen to be too tough on her son. Busy lawyer Allan is too tied up dealing with incessant work phone-calls to be paying much attention to what’s going on. And easy-going Michael will largely agree to anything just for a bit of peace and quiet.
What was meant to be a brief meeting between the middle-class Longstreets and the upwardly mobile Cowans ends up dragging on for much of the afternoon, as defences fall, tensions rise and the adults start acting more like the children they’re arguing about in this real-time, comic drama.

Still unable to enter the US but clearly still keen to comment on American society, Roman Polanski has come up with the perfect solution – a film that slices through the niceties of US civility, that’s set entirely inside an apartment – and almost entirely in one room.
He helped Yasmina Reza adapt her own award-winning stage play, The God of Carnage, for the screen and cast four outstanding performers in the only on-screen roles.
The constraints give Polanski the chance to deliver a fine piece of work on a small-scale, keeping budgets down while keeping the entertainment levels up.
The script bristles with surprising wit, delivered to perfection by four actors at the top of their game. Jodie Foster and Kate Winslet deservedly received Golden Globe nominations, but the film was entirely overlooked by the Academy for the Oscars – with Winslet, John C Reilly and the screenplay thoroughly deserving of at least a nomination.
Polanski does a skilled job of keeping the plot moving, even though it’s just four people walking around a room, being alternately polite and cutting towards each other. The characterisation hits the mark from the outset, with the two couples involved in a thrilling tug-of-war-of-words, as they assess their foes and fight accordingly. And witnessing how characters respond to their growing discomfort is a delight, as Carnage provides brutal fun for the audience.
The tension remains high, but effective running gags, as well as impressive comic moments, lighten the mood.
The film’s only failings are that at times it does feel a little too small – there’s not enough at stake for us to care too much about the outcome of their conversation – and while Polanski constantly keeps it interesting, even at just 80 minutes, there are times where it feels like there’s just no-where for it to go.