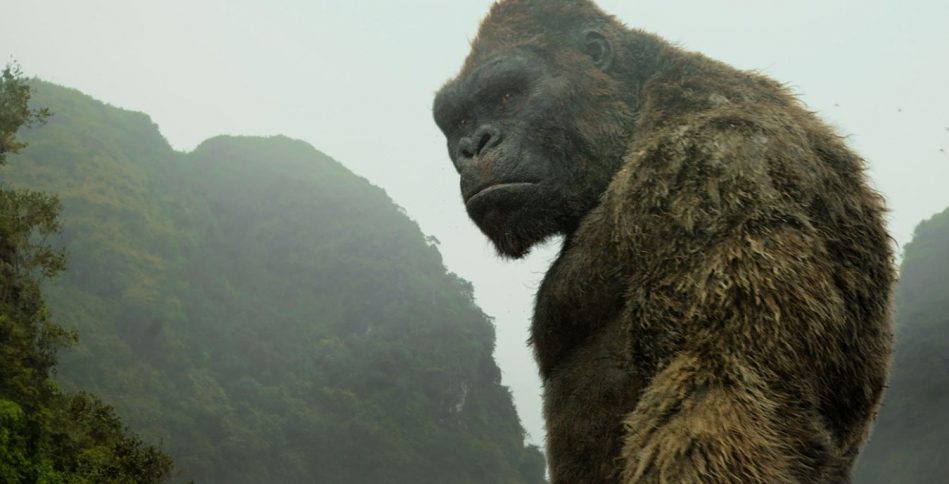 It’s the early 1970s and scientist Bill Randa (John Goodman) is desperate to lead an exploration of an uncharted island in the Pacific Ocean, but can’t get funding. He manages to persuade a Senator friend (Richard Jenkins) to help them piggy-back on another mission to the island – and to provide them with military escorts: a group of soldiers, returning from Vietnam, led by Colonel Packard (Samuel L Jackson).

As the mission begins, Packard’s army helicopters fly the team through the storms to reach Skull Island, and drop explosives to the surface, as part of what is supposedly a geological experiment.

But the blasts attract the attention of a local who doesn’t take kindly to their arrival; a giant gorilla, Kong, does its best to bring down as many of the aircraft as it can, and the survivors retreat into the forest and plan their route to their pre-arranged escape point at the far north point of the island.

But the journey will be as tough as you’d expect for an island from which no-one has ever escaped before, as they encounter a range of giant beasts – and awaken a monster that can even given Kong a run for its money.

This film is every bit as big as you’d require of such a CGI monster fest, but with the thinnest of narrative threads to hold it together, it’s peculiarly boring for such a spectacle.

It simply doesn’t know what it wants to be – the tone unevenly flips between creature-feature and one of those horrors with individual characters being killed, one by one, in increasingly shocking and dramatic ways.

The characters are generally not interesting enough, with Samuel L Jackson just being shouty, Brie Larson doing little more than taking photos and Tom Hiddleston’s acting appearing to be wooden enough that it looks like he’s every bit as CGI as Kong.

But despite a lack of engagement with the largely dispensable characters – in most cases, you’d be perfectly happy for any of them to be devoured by beasts – when the monsters appear, it feels like CGI team is just trying to show-off, rather than deliver anything with coherence.

The scenery was gorgeous and the fights between the monsters were impressive enough, if a little interminable. But rather than the beastly battles, perhaps the best of the CGI is the way Kong seems to engender more empathy from the audience than most of the humans.

While the title might suggest that Kong should blow us away, Skull Island only really comes alive when John C Reilly is on screen, as a character who has the charisma of the rest of the cast – and monsters – put together.