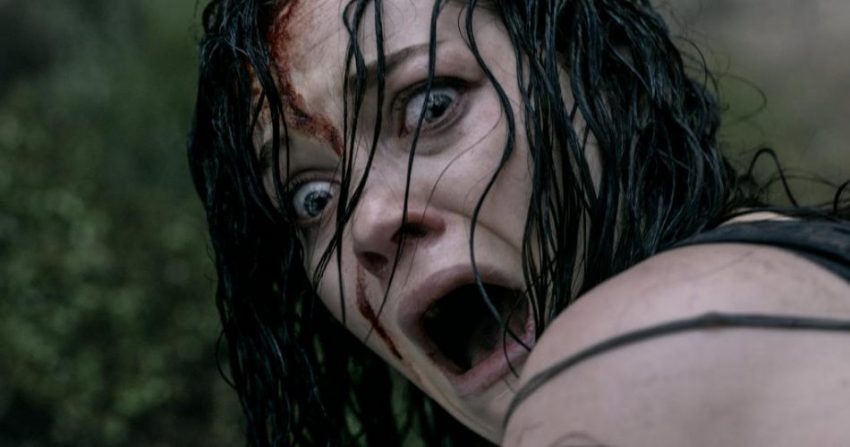 Teenager Mia (Jane Levy) has a long-running drug problem, so her twenty something brother David (Shiloh Fernandez) and a group of his friends take her to spend a week in their cabin in the woods, where there’ll be nothing around to tempt her if she’s struggling to stay clean.

Smelling a foul stench, they find a hatch in the floor and go down to explore. Among the rotting dead mammals and ominous paraphernalia, they find a mysterious old leather-bound book, wrapped in barbed wire.

Despite warnings not to open it, the geek of the group, Eric (Lou Taylor Pucci) can’t resist uncovering its secrets. Interspersed between blood-spattered creepy drawings, depicting demons and torture are incantations written in blood. He feels compelled to read them out aloud.

The evil spells summon a demon who, one by one, possesses the group, creating hell on earth as they carve each other up and rip each other to pieces.

Can any of them work out what’s going on and discover how to banish the demons back to hell, before it’s too late?

After a handful of short films, the Uruguayan director Fede Alvarez made a five minute science fiction about giant robots invading earth. On a tiny budget, Panic Attack was such a highly accomplished special effects masterpiece that it’s now attracted more than seven million hits on You Tube and within a month of being uploaded, persuaded Sam Raimi to sign him up to direct this reworking his 1981 classic horror.

Evil Dead 2013 is somewhere between a remake, a reboot (number 2 is on the way) and a sequel, with the story being similar enough to be recognisable but different enough to stand alone. But this isn’t about the story.

With a bunch of unknown – or at the very least little known – actors, we don’t get to know or like any of them enough to care how many pieces they end up in – it’s just one of those films that conjures up as many grisly deaths as the size of the cast allows.

It’s certainly imaginative in the way it dispenses of its characters, and the horror is nasty enough to make even the least squeamish viewers hide behind their fingers or wince in anticipation, but these elements are there for shock value, rather than serving any narrative purpose.

This is perhaps attributing too much respect to a genre that is not trying to engage our minds and instead wants to upset our stomachs.

Evil Dead is not clever, but it will tick the right boxes for film-goers who enjoy watching charmless protagonists slashing each other – and themselves – to bits, with the aid of demonic visitors from the underworld.