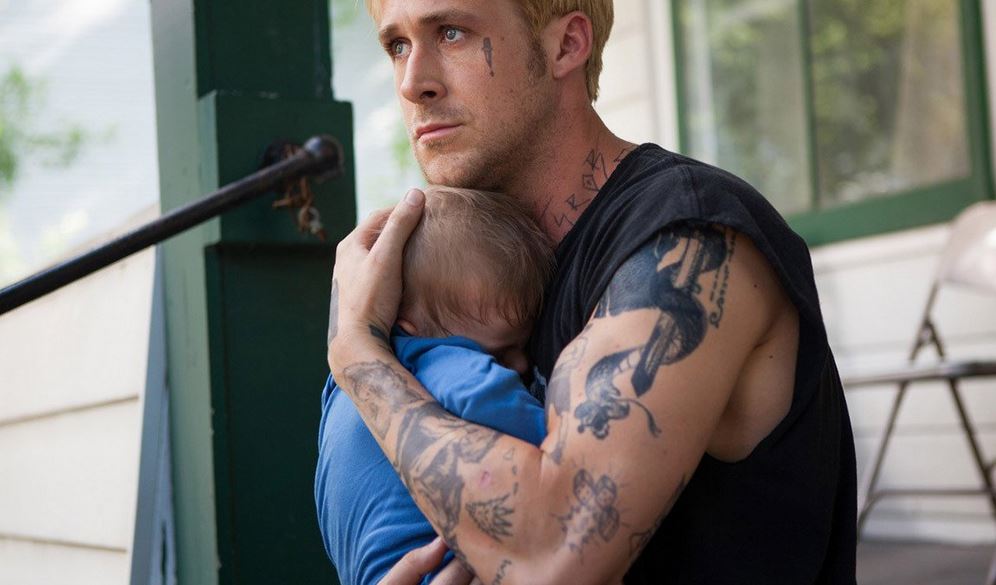 Luke (Ryan Gosling) works as a motorcycle stunt rider for a traveling circus. Returning to the small town of Schenectady, in upstate New York, he bumps into Romina (Eva Mendes), who he had a little fling with the last time the circus was in town. He also bumps into the son she had but never told him about.

Luke decides to grow up, put down some roots and support his son, but how? He has no qualifications, so he can’t get a job. And things are complicated by the fact that Romina now lives with her new boyfriend, who treats the baby as his own.

Luke’s new friend, a lowlife mechanic Robin (Ben Mendelsohn), shows him a way to make some money – bank robbery – it’s not something he would have gone for, but he can’t see any other choice.

The police officer sent to catch Luke, Avery (Bradley Cooper), also has a young son. After a gripping chase, the encounter between the pair will change the lives of the two men and their sons forever.

It divides very clear into three stories, told chronologically; first Luke’s (Ryan Gosling), next Avery’s (Bradley Cooper) and then the coincidental arrival of their sons in the same class at high school, fifteen years later.

Each story is a different genre – first, a drifter decides it’s time to grow up, in a gritty drama – next is a police and political thriller, with Ray Liotta playing a typical corrupt cop, trying to lead our protagonist astray – and thirdly, a social drama about the relationship between two teenagers from different backgrounds.

These three “short films” don’t gel especially well together and each one becomes decreasingly satisfactory and original. There are too many loose ends left in the second and the third feels completely contrived.

Gosling is as convincing as you would expect from such an accomplished actor. While this is being sold as Cooper’s “best performance ever,” it’s not as complex or fascinating as his Oscar-nominated turn in Silver Linings Playbook, but it’s certainly as powerful as it is efficient.

The Place Beyond the Pines does not quite achieve its lofty ambitions. It’s an engaging watch, thanks to strong performances, but it’s disjointed narrative grates as it tries to pound home messages about masculinity, parenthood, loyalty and responsibility. While it has much to say, none of it is particularly fresh.

It feels like it’s trying to be a big, important, awards contender, which makes its spring release quite unusual.