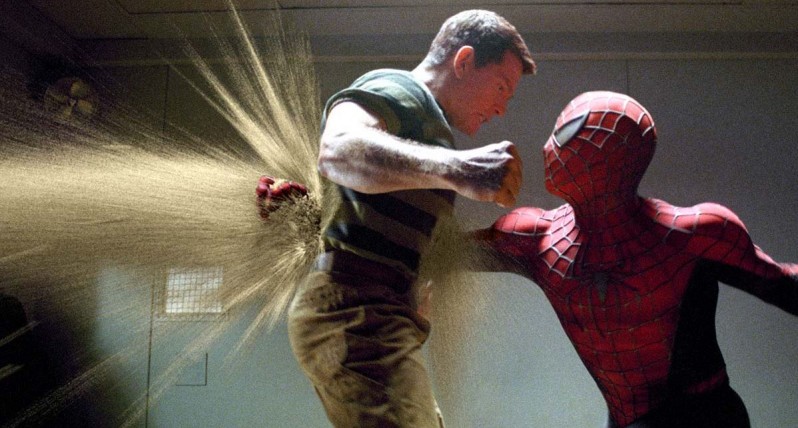 It’s been a while since best friends Peter Parker (Tobey Maguire) and Harry Osborn (James Franco) have been able to be civil with each other. After all, Harry thinks Peter – in his “secret” superhero identity as Spider-Man – killed his father, the Green Goblin (in episode one!). When Harry steps onto his late father’s hoverboard, to avenge his death, he ends up – after a rather nasty bump on the head – forgetting he ever had a problem with Peter and the friendship is back on. But slowly, the recent past starts coming back to him and Peter, meanwhile, is beginning to let his Spidey fame go to his head. It’s putting pressure on his relationship with his actress girlfriend Mary Jane (Kirsten Dunst) who, feeling rejected, turns to Harry for support.

Across town, a killer, Flint Marko (Thomas Haden Church), is on the run from jail – as he tries to hide from the authorities, a bunch of government scientists inadvertently turn him into sand – blessing him with an invincible strength, perfect for every comic-book bad guy. As luck would have it, it turns out that Marko was involved in the death of Peter’s uncle.

As all this is going on, some black goo which came to earth inside a meteorite (stick with me…) has made its way into Peter’s bedroom and is accentuating his bad emotions – amplifying his selfishness, pride and anger towards the Sandman.

Oh – and upstart freelance photographer Eddie (Topher Grace) is challenging Peter for that rarity of a staff job on the Daily Bugle – but the new dark Spidey isn’t standing for any nonsense.

Can Spider-Man overcome his demons before they consume him and get back onto a righteous path, in the process, ridding the city of evil, resolving his differences with his best friend and winning back the love of his soul-mate? No surprises for guessing the answer – this is a summer blockbuster super hero movie after all.

As all that suggests, there’s rather a lot of plot going on here – three bad guys, three love stories, a professional rivalry, not to mention our eponymous character battling with his own conscience, in all areas of his life, from love, to business and even his super-hero activities.

Even with more than two and a quarter hours to spread it across, the film still seems a bit too heavily plotted and over complicated. Having so many characters – all with their own back stories – makes it a case of “too much information.”

With so much going on, it inevitably makes the film rather hit and miss – a lot of good moments, strung together by a lot of mediocre ones.

Another problem with the psychological side of the story is that many of Peter Parker’s quandaries (such as balancing his personal and super-hero lives) also featured, in one way or another, in the previous films, making this seem rather worn in places.

It does seem to be packed with rather too many corny moments of worthy moralising.

The special effects are, of course, as impressive as ever – and so they should be for what they cost.

As a piece of storytelling, it’s not as concise, mature or indeed sharp or funny as either of its predecessors – neither is it as enjoyable. But they were among the best mainstream super-hero blockbusters of recent years, so it’s hard to live up to that.

All that said, there’s no question that it is a highly entertaining piece of film-making and there’s a sense in which it’s good value for the cost of your ticket price. But this is probably two films compressed into one – as if Sam Raimi wanted to squeeze in as much as he could, just in case the studio didn’t commission another one.