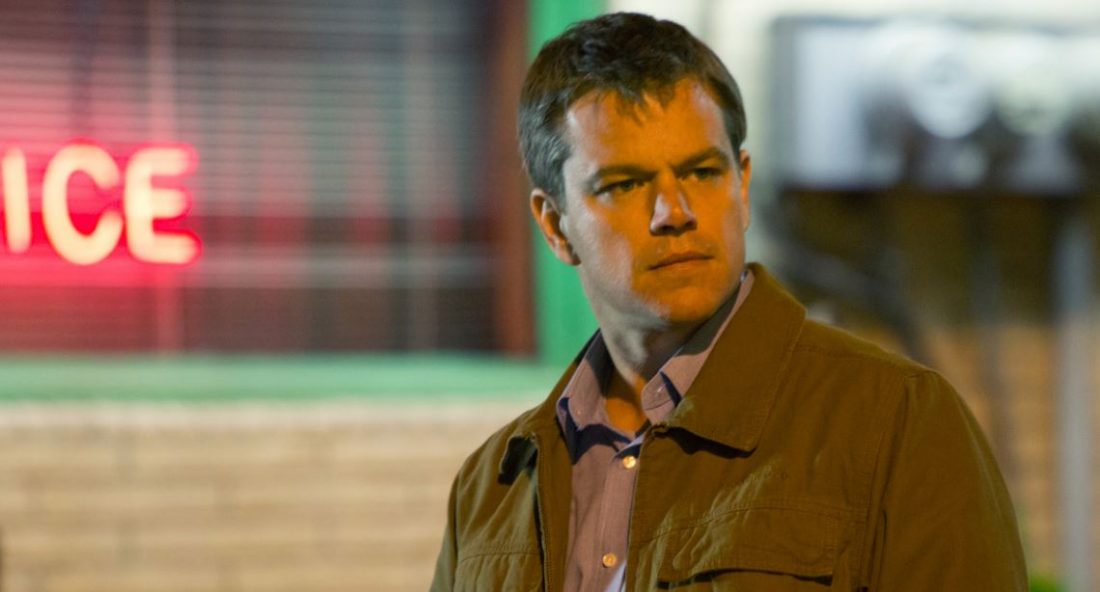 Energy firm Global is travelling around the US, buying up farmland in rundown communities to extract natural gas using the controversial process known as fracking.

In particularly resistant areas, they send in their top consultants, the charming Steve (Matt Damon) and straight-talking Sue (Frances McDormand).

In one remote town, while the mayor tries to rally the support of the people, because the local economy needs the corporate cash, Steve and Sue face a dual-pronged attack from an elderly teacher Frank (Hal Halbrook) and a clean-cut environmental campaigner Dustin (John Krasinski).

For every reassuring word that Steve and Sue have, Frank raises safety fears and Dustin provides evidence of the dangers from fracking in other parts of the country. Soon, the personalities of all those involved start to matter more than their arguments.

The longer it takes for the pair to close the deal, the more they stop to consider their own feelings about the morality of what they do.

After several years starring in major movies, Matt Damon returns to the format that made his name; as with Good Will Hunting, this is an issue-driven drama, directed by Gus Van Sant and written by Damon with his co-star, in this case John Krasinski.

But while this is enjoyable enough, with the characters being likeable when they need to be and less so when it’s appropriate, much of it is either over-simplistic (the mayor is presented as evil, while the teacher Frank feels like a religious prophet) or somewhat arch; there’s a twist which, while clever, feels contrived enough as to make you feel a little cheated.

And some of the side stories feel redundant as Rosemarie DeWitt and Titus Welliver mill around, tweak the interest of Damon and McDormand, respectively, which feels like a clunky way to humanise the city folk and make them identify more with the locals.

Although it presents itself as a film about the environment, it grows less worthy as it becomes more about big business, and ultimately fails to address the real safety or dangers of fracking, which was ostensibly the film’s premise at the start. In fact it’s troubling how little Damon’s character seems to know about his subject himself – as soon as questions are put to him at a public meeting, he puts his hand up and admits that he’s the wrong guy to ask – so why did they send him? There is, though, as sense in which a company might think that if they send the nice guy, he’s more likely to win favour – which would explain, even further, why the environmental group would have to send someone with even more boyish charm.

The film plays, in a sense, like Erin Brokovich, with the poor townsfolk challenging a conglomerate about an environmental threat, but where that film had charm, here it feels more contrived. Promised Land is not unenjoyable, and is certainly thought provoking but it’s not entirely convincing, and so similarly unrewarding.