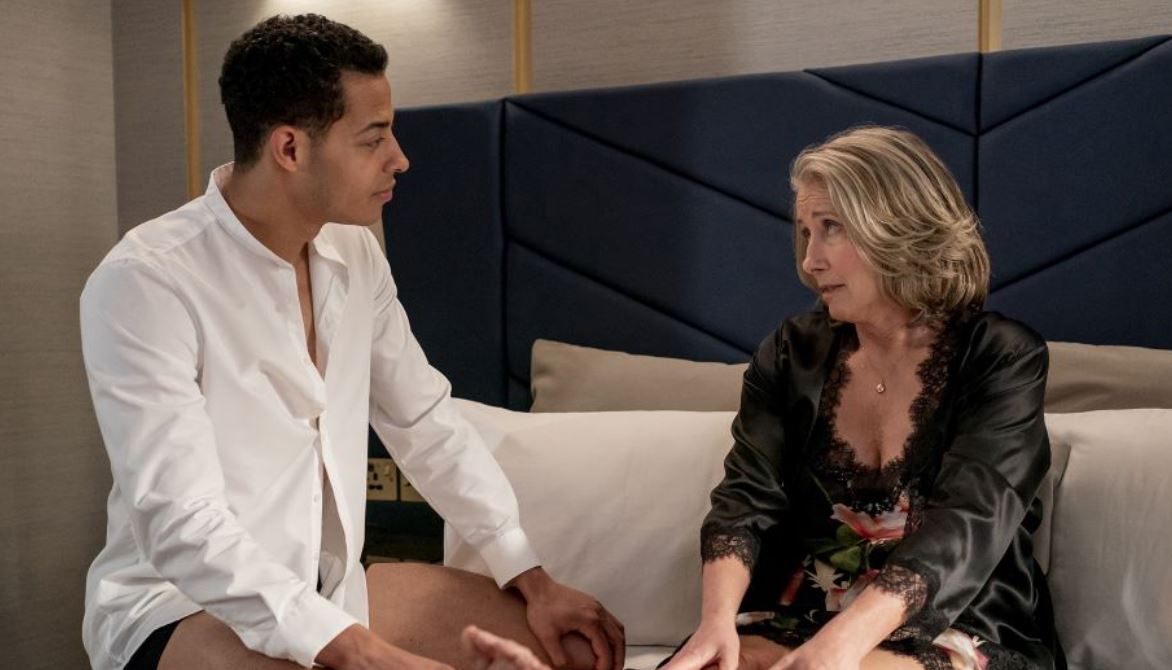 Retired RE teacher Nancy (Emma Thompson) is still coming to terms with the death of her husband – the only man she’s even slept with – and the only man she found to be more boring than their son. One thing in the forefront of her mind is how he was never the most adventurous under the covers.

After thirty years with him, she’s ready for some “me time” and hires male escort Leo Grande (Daryl McCormack) to join her in a hotel room to show her what she’s been missing out on, all these years.

Over the course of a number of meetings, the middle-aged, prim-and-proper pillar of society slowly comes out of her shell as she learns about herself, her young companion, sex, love and life.

Emma Thompson is on fine form as she frees middle-aged women from the shackles of sexual mundanity.

No-one wants to think about what their parents get up to behind their bedroom door but you get the sneaking suspicion that what Nancy Stokes has experienced is probably common enough for it to warrant having a film about it. As a middle aged man, I can only suspect that this film will have more resonance for woman – and apologise on behalf of men that it has come to this.

Nancy’s shameless journey of self-discovery goes far further than the initial subject of sexual awakening, as she stops to consider her relationships with her children, her former pupils and how to improve her widowed life generally.

But sex is at the heart of this film, which – among other things – raises the question as to why people make such a fuss about it in the first place. Why is it such a taboo subject? Why are perfectly natural experiences deemed to be seedy and shameful? Why should we feel guilty to seek pleasure? Why should a woman in her fifties be so worried about never having done a 69 in the first place? And does that mean there are at least 68 other sexual positions?

This film challenges assumptions about sex workers – she thinks she’s taking advantage of this poor young man, who must be resorting to selling his body because of a desperate upbringing – but his cool and calm charm and confidence make it clear that he’s always in control of the situation. It further puts an interesting twist on the subject matter, reversing the roles; how often do we see older men hiring younger women for sex on screen? Indeed, imagine how this film might have been viewed with a man in the central role?

There are just a couple of moments where Katy Brand’s screenplay puts a foot wrong, to ratchet up drama, which doesn’t feel authentic – or necessary – but she thankfully avoids the temptation of going down a particular Hollywood route that could have left audiences cringing, instead taking a mature approach to the subject – and putting an unusually physical spin on psychoanalysis.

The academic rigour with which Nancy approaches this project provides much of the humour, while the warmth comes from the unexpected vulnerability of a woman who’s put on a strong, but accepting face for decades. It’s sweet, funny, brave and revealing – both literally and figuratively.