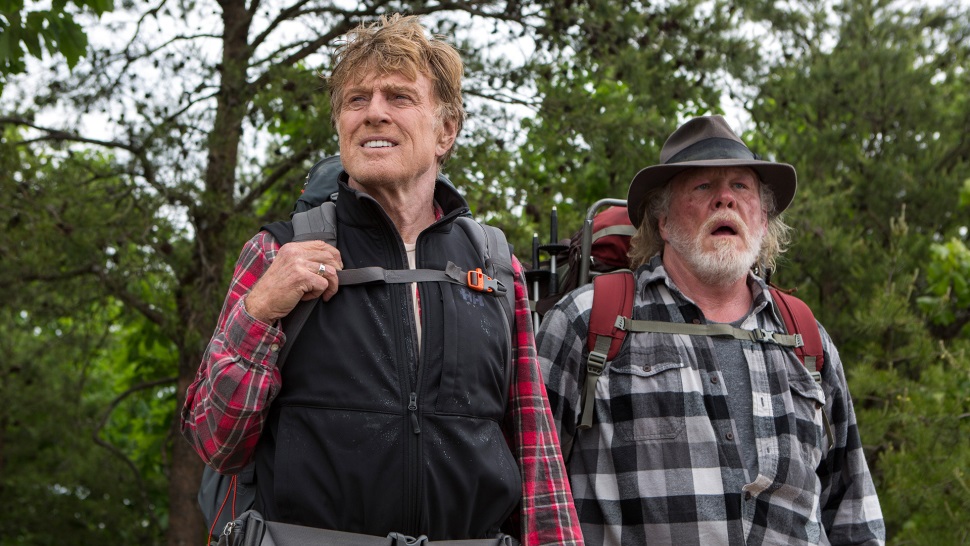 It’s been a few years since the esteemed travel writer Bill Bryson (Robert Redford) has returned from living in the UK and made New Hampshire his home.

Since then, he’s written little more than forewords for other people’s books and he’s growing increasingly frustrated with just about everyone and everything.

He decides that to spice up his life and rekindle the adventurous fire that burns deep inside him, he’ll set out to walk the 2000 mile Appalachian Trail.

After reading articles about how hikers have been found dead along the route, his wife Catherine (Emma Thompson) refuses to let him go alone, so he puts out feelers to pretty well anyone he’s ever met.

But the only person who’s interested in joining him is an estranged friend, Stephen (Nick Nolte), an overweight, unfit, recovering alcoholic, who’s got his own reasons for getting away from home – and doesn’t look like he could walk 2000 yards, let alone 2000 miles.

It’s taken a while for Robert Redford to bring this to the big screen – the delay finds us watching a man in his 70s playing a man in his 40s, which puts a different perspective on the real-life events it’s meant to portray. The Bryson in the film is in his autumn years, trying to make sense of his past and the time that’s left, largely retired and proving to himself that an ageing man can overcome a physical challenge – in reality, when Bryson set off on the Appalachian Trial, he was more of a young slip of a man between jobs. What was probably more of a “mid-life-crisis” is presented as more of a “late-life-crisis.” But while shifting the story three decades provides the opportunity for some potentially revealing personal exploration, in reality, it does little more than target the film towards an older audience. Oddly though, despite it being based on real events, shifting the age of the walkers actually makes the eventual outcome more likely.

For a film that’s painting itself as a look-back on life by a man who spends most of his time attending friends’ funerals, there aren’t many revelations of self-discovery – certainly less so for the protagonist than his companion. It’s Nick Nolte’s Katz – apparently a pseudonym for his real-life counterpart – who has a more interesting back-story and more challenging developments during the film; the comfortable Bryson just puts one step in front of another, while the desperate Katz turns his life upside down, running from his past and trying to fix himself for the future.

After having seen Redford’s solo masterpiece in All is Lost, this duet with Nick Nolte is an easy enough watch – less gruelling, equally entertaining but less meaningful. Like this week’s other release Everest, this film sends its characters off on what’s meant to be a life-changing adventure – this journey doesn’t change the lives of the adventurers to the same extent – and the challenge itself is likely to appeal to rather more viewers.

At it’s heart, A Walk in the Woods is an odd-couple buddy comedy, less of a road-movie than a trail-movie. There’s a little Planes, Trains and Automobiles in there, as the unlikely pair trek cross-country, in different conditions, learning more about each other as they go.

The humour is gentle, the drama is light, the dialogue honest, the revelations slight.