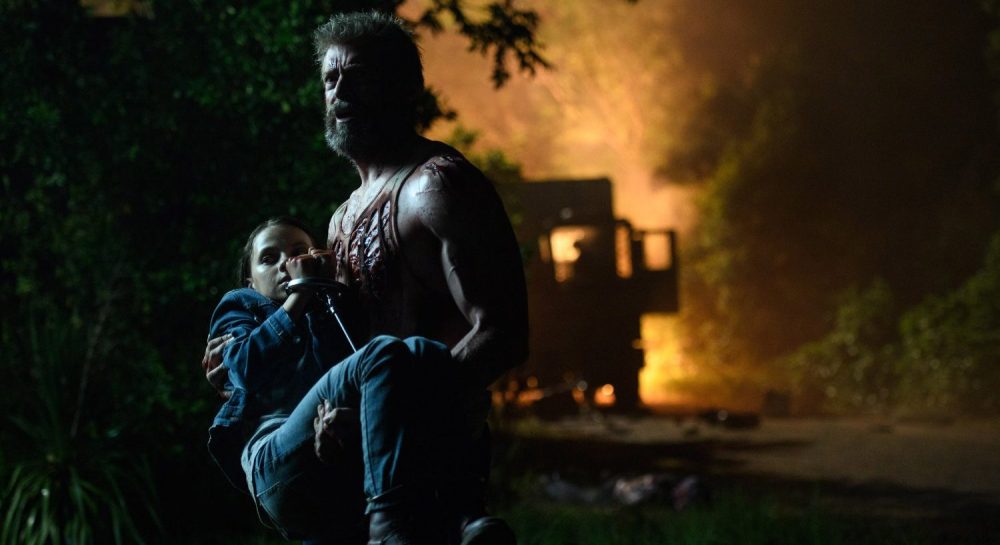 Set in 2029, when mutants are all but gone, a weary Logan (Hugh Jackman) is taking care of an elderly and ailing Professor X (Patrick Stewart) at a hideout on the Mexican border.

They are joined by Caliban (an unrecognisable Stephen Merchant), an albino mutant, who babysits Charles while Logan is out working as a limo driver for hire, to pay for the Professor’s black market drugs.

But Logan’s efforts to turn his back on his past life – and the world – are thwarted when he is forced to protect Laura (Dafne Keen), a young Hispanic girl with similar abilities to himself, who is being pursued by bad hombres.

They embark on a road trip to the Canadian border to get her to safety.

After seventeen years and nine films, Hugh Jackman is finally saying goodbye to Wolverine, the character that launched his cinematic career in the most heartfelt and fitting way possible, in an X-Men film like no other.

This is the darkest and most violent film in the franchise and the most stripped down superhero movie. This is a drama about family not superpowers, which explores Logan’s deep-set anger and aggression, his humanity and his mortality.

Gone is the wisecracking, cigar chomping, loner Wolverine and in his place is an ageing, jaded, permanently angry, hard drinking Logan who has trouble healing and who has turned his back on his mutant hero past.

Jackman gives a remarkably powerful, nuanced and moving performance, worthy of recognition, which provides a disturbing insight into his character’s anger-management issues.

When he goes full blown Wolverine it is carnage slasher horror style.

In interviews he said he wanted to portray Wolverine exactly as he is envisaged in the comics, warts and all.

Meanwhile Sir Patrick Stewart is truly magnificent as the frail and vulnerable Professor X, in his nineties, who is suffering from seizures and the mutants’ version of Alzeihmer’s.

However when he loses his mind it results in hundreds being maimed and killed. His scenes with Jackman, which examine their characters’ father/son relationship are some of the most poignant and touching in this film.

Richard E Grant is also in his element as the evil mad scientist who has been experimenting on mutants and is hunting Logan and the girl who is played brilliantly and sinisterly by newcomer Dafne Keen who seems to be channelling her own Rosa Klebb (From Russia with Love) with her foot claws. She gives Logan a run for his money in the anger and killing stakes.

Co-writer/director James Mangold, who worked with Jackman on The Wolverine and Kate & Leopold (the less said about that the better), delivers a raw, bleak and brutally violent drama full of pain and anguish about sacrifice, redemption and of course family.

It is also wonderfully stirring yet devoid of sentimentality and surprisingly politically relevant.

Yet you can’t fail but to be moved.

This is the standalone Wolverine film we have all been waiting for and it has certainly been worth the wait.