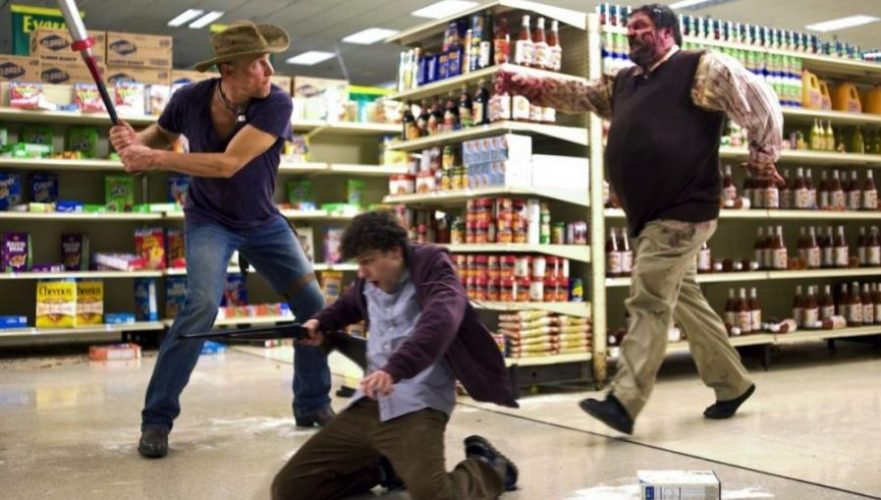 A virus has broken loose and America is no longer the land of dreams, but the land of nightmares. With every human as far as the eye can see having lost all power of thought and developed an insatiable appetite for flesh, the few human survivors have renamed the country Zombieland.

A college student (Jesse Eisenberg) is making his way back home to Columbus, Ohio, to see if any of his estranged relatives are still alive. He hasn’t encountered any other human survivors yet. Despite being a bit of a geek and a loser, he’s managed to survive this long by rigidly following a set of rules – such as “keep fit,” “avoid bathrooms” and “don’t be a hero.”

As he’s pulling his little suitcase along the car-wreck-strewn interstate highway, a shiny black Cadillac pulls up alongside him. Its driver (Woody Harrelson) refuses to exchange names, saying only that he’s heading home to Talahassee.

Although the pair are suspicious of each other, Columbus hitches a lift east with Talahassee, since they both seem to share the same aim – survival. Talahassee has two other aims – killing as many zombies as he can – and finding some twinkie cakes before the world’s remaining supplies pass their sell by date and one of America’s favourite snacks goes the same way as most of the country’s inhabitants.

Stopping at an abandoned supermarket with one goal in mind – liberating the twinkies, of course – the pair stumble across two teenaged sisters, born respectively in Wichita (Emma Stone) and Little Rock (Abigail Breslin), who lull them into a false sense of security, before running off with their car and their weapons.

OK, so there are trust issues here – how do you know who to trust? But the last thing Columbus and Talahassee need is to find themselves squeezed between the zombies on the one hand and a pair of devious sisters on the other.

They have to reassess their priorities. Do they want to get back on their feet and find freedom back east or chase the girls to California to get their own back?

Zombie movies are nothing new so it’s refreshing to find one that feels at all original.

Part of the beauty of Zombieland is that its tongue is firmly rooted in its cheek throughout, delivering a strangely warm and funny action adventure.

The zombies almost become an incidental background to a comedy road movie about a mismatched pair of guys who find themselves on the back foot when they encounter a pair of precocious girls.

Harrelson’s in his element as the gun-toting, twinkie-craving, zombie killer, while Stone and Breslin (a convincing change from her cutesy award-winning introduction to the world in Little Miss Sunshine) are perfect for their cheeky, trouble-making roles.

Neat visual gags and funny cameos from the understated Mike White and an A-lister who I won’t name, so as not to spoil the fun, add to the enjoyment of the freshest zombie flick since Shaun of the Dead.

As a zombie film, per se, there’s not much going on. The idea of a slow-onset virus causing an apocalypse so sudden that cars pile up on motorways seems a little unlikely. And it’s not at all frightening – but I don’t think the film-makers are even trying to make you jump. They’re trying to make you laugh. And they succeed.

The zombies are run-of-the-mill groaning, pale folk with outstretched arms, dragging feet and blood smeared all over their faces. But this film isn’t about them.

The key characters are so much fun that you’ll find it hard not to warm to them – all of them.

It’s a rather weak and superficial film with little to teach you about anything, but with no pretensions, it achieves everything it sets out to do, and ends up being one of the smartest, freshest and most enjoyable films of any genre of the year.