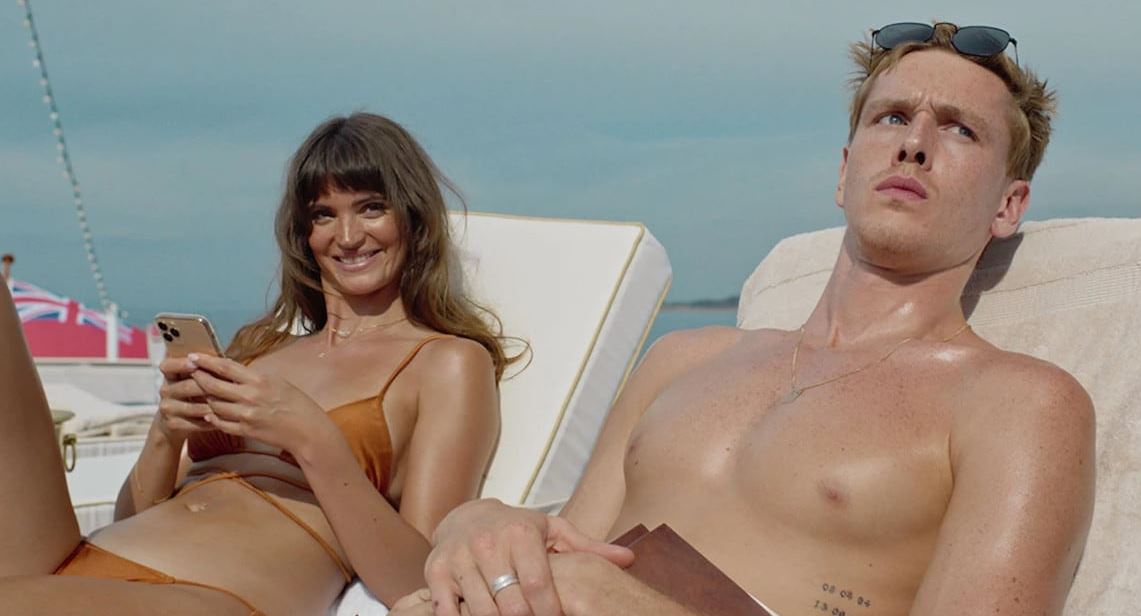 Carl (Harris Dickinson) is an up-and-coming model, dating Yaya (Charlbi Dean), an already up-and-come model; she earns more than him, which gives him a bit of a complex, but expects him to pick up the bill when they go out on dates, which often prompts arguments. They look good together – but you couldn’t really say they ARE good together.

Wealthy as they are, they’re gifted a pair of tickets on an exclusive cruise on a luxury superyacht, where they mingle with the kind of people who can genuinely afford such a holiday, from Russian oligarchs to genteel British arms dealers. The highlight of the cruise is dinner with the captain (Woody Harrelson) – which, despite the efforts of the attentive staff, doesn’t go to plan.

What happens next – and I won’t spoil this for you – makes the self-important billionaires and celebrity influencers question their own usefulness, when confronted with working class shipmates, much better suited to the new situation.

How will everyone cope when the tables are turned? They say money can’t buy you happiness. And if this series of events is to be accepted, they’re right.

Ruben Östlund won his second Palme d’Or for this social comedy, after first taking the top prize at Cannes for a not dissimilar look at the world of culture in The Square.

Tonally similar, the two films even both boast scenes in which posh dinners catastrophically descend into chaos. Östlund must once have had a bad experience in an expensive restaurant.

This time, his main target is the super-rich, with a little disdain reserved for the world of super-models and celebrity influencers – their vapid selfishness, shallowness and sense of self-importance. They’re both easy and common targets in popular culture – a very long list could include The Discreet Charm of the Bourgeoisie, The Great Gatsby, Greed and Zoolander.

Its sideswipe at the fashion world is perhaps when it’s at its sharpest, but that’s over by the opening credits, when it’s replaced by some deliberately uncomfortable relationship discussion, before launching into a brash, full-frontal assault on wealth and privilege – in two parts; firstly, we meet some filthy rich people, on whom Östlund swiftly passes judgement, before inflicting social justice on them as events reverse their fortunes, enforce a little levelling-up and put them in their place.

There are some insightful moments, as he questions whether it’s fair to judge people by their professions, but it’s mostly quite obvious fare and there is certainly little effort to be subtle or nuanced.

Much of it even feels familiar, recalling his own earlier work, a touch of Monty Python’s The Meaning of Life and an entire last act that could have been copied directly from one of two big TV hits of the early 2000s – a scripted drama and a reality show.

Entertaining and breezy as it often is, Östlund’s Triangle of Sadness veers a little too far from reality for any message to feel authentic and the final scene leaves you wondering what he even thinks of his own film.

One of the most interesting characters, Woody Harrelson’s alcoholic captain is mostly off-screen, although he has a couple of striking scenes – including one that tries to add a political spin to the proceedings.

This has been a busy year for relative newcomer Harris Dickinson, seen in recent months in Where The Crawdads Sing and See How They Run and now shining, front and centre of this globally acclaimed satire. It should also have been the breakthrough film for his co-star Charlbi Dean, but she tragically didn’t live to see its general release.