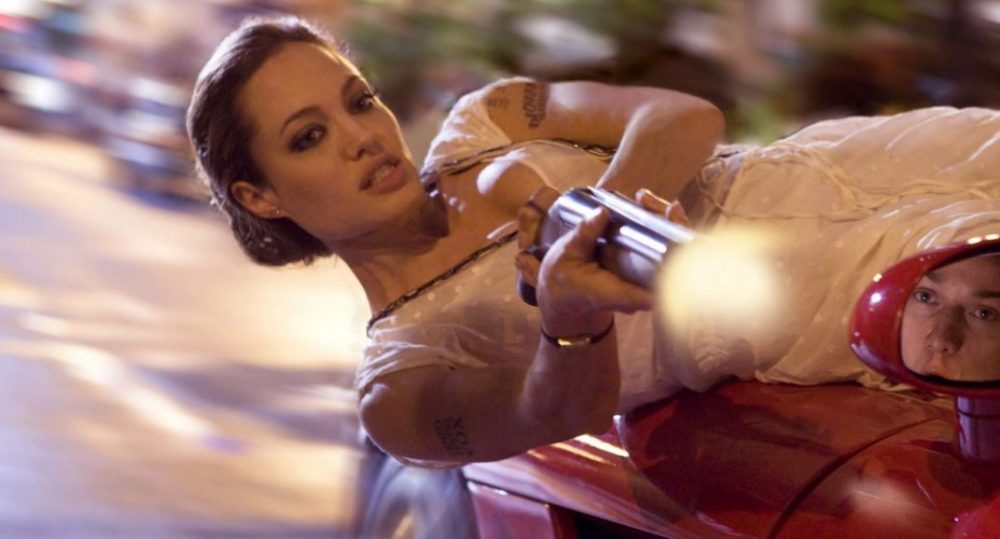 Six weeks ago, Wesley Gibson (James McAvoy) was – and I quote directly from the film – “ordinary and pathetic, just like you” – yes, he means you, the audience.

Speak for yourself, Mr Gibson – but whether or not viewers are “ordinary and pathetic,” Wesley – a customer service account manager, who spends his working life in a booth and his personal life oblivious to the fact that his only friend is sleeping with his girlfriend – certainly is.

But that all changes one day, when he’s approached in a supermarket by an attractive but unassuming woman, Fox (Angelina Jolie).

She informs him that he’s actually the son of one of the world’s greatest assassins, who’s just been killed by a rogue agent calls Cross (Thomas Kretschmann), who’s now after him. Bang bang. Shots start flying across the supermarket. Cross, of course, is hiding behind the breakfast cereal.

Fox whisks Wesley to the safety of the compound of their organisation, the Fraternity, where – under the guidance of their leader Sloan (Morgan Freeman) – Wesley is turned from a mild-mannered loser of an office-boy to a highly trained assassin who can bend the path of bullets with his mind, slow down time and regenerate himself in the bath – with the names of his victims provided by – wait for it – missed threads on the “loom of fate.”

The Fraternity have been preparing him to kill the man who killed his father – but is all what it seems?

It seems silly – and all is silly. This loud, cars-and-guns romp is just about the silliest film (that takes itself seriously) that I’ve seen for years.

Even the writers of the film – which is based on graphic novels – can’t possibly claim that their plot is anything other than ridiculous, illogical and incoherent.

But this isn’t about story – and it’s certainly not about character (Marc Warren’s “Repairman” does nothing more than snarl and punch people; David O’Hara’s short-lived Mr X just growls and flies like a character out of the Matrix; Angelina Jolie does little more than drive fast cars like a maniac and shoot at people – round corners, or course) – it’s about action – insane, unworldly, gun-toting, car-flying, physics-defying action.

From the Russian director who brought us the visually spectacular, but nonsensical Night Watch and Day Watch, Wanted delivers exactly the same level of stunning stunts and over-the-top shootouts.

The producers will be banking on the fact that most English-language speakers won’t have seen the Russian films, which will make the look of the film feel all the more original.

Visually, there’s no doubt that this is a stunning piece of work. The action will get your heart thumping and you might even find yourself teetering on the edge of your seat from time to time.

Arguably, at times, you could say it’s tremendous fun – but it’s about as far from a satisfying emotional experience as Timur Bekmambetov had to travel from Moscow to Chicago and it’s a complete waste of actors of the calibre of Freeman, Jolie and McAvoy, who are clearly having fun, but aren’t doing their credentials any good at all.

It might have been some relief to anyone struggling to make sense of this if the director’s name had come up in the stitching of the fraternity’s “loom of fate” but it almost certainly couldn’t have spelt it.