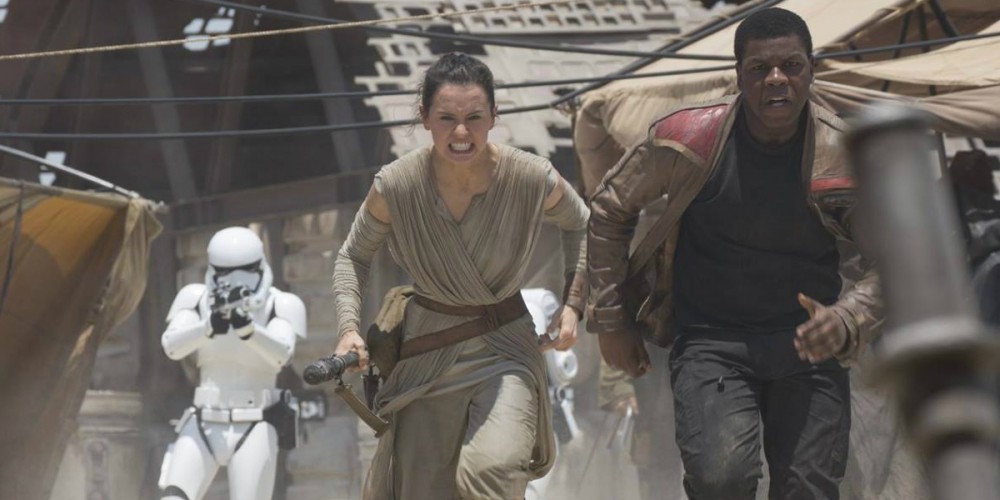 A long time ago – although not quite as long ago as the earlier films in the franchise – in a galaxy far away, the last surviving jedi, Luke Skywalker (Mark Hamill) has disappeared and in his absence, a new evil empire, known as the First Order is growing in power and influence.

The First Order, under the guidance of a black-cloaked, helmeted, robotic-voiced Kylo Ren (Adam Driver) and the Resistance, led by General Leia (Carrie Fisher), are each desperate to trace Luke.

But despite the highly trained armies on each side, the fate of the galaxy ends up falling into the lap of a defector from the ranks of the Stormtroopers (John Boyega), a scrap-metal scavenger (Daisy Ridley), a merchandise-friendly rolling robot, BB-8, and a handful of familiar (action) figures from your childhood.

After George Lucas delivered “a new hope” for science fiction on the big screen with his original trilogy – episodes 4, 5 and 6 in the saga, as it turned out – and then destroyed that hope with his own prequels, Disney, the new owner of the Star Wars franchise, had to get this right.

For many fans, seeing JJ Abrams, the man behind the rival sci-fi franchise Star Trek, taking the helm sounded a note of caution, but he turns out to have been the right man for the job, delivering a thoroughly entertaining episode.

After the familiar opening scrolling scene-setter, telling you all you need to know to be up to speed, against John Williams’ rousing theme, the opening frames make it clear that to fans that they are in safe hands and will enjoy a film that bears far more resemblance to the 1970s and 80s classics than their rightly-maligned noughties prequels.

There are plenty of nods to the original three films, although The Force Awakens does, importantly, stand on its own two feet – that said, almost no-one who goes to see this won’t have watched at least Episodes 4 to 6, anyway. These nods include many of the same characters, played by the same actors – even those whose faces are buried under metal or fur, the screen-wiping scene-transitions, similar landscapes, many of the same vehicles and costumes (one might ask why, thirty years after the events of Return of the Jedi, there don’t seem to have been many advances in the Stormtrooper suit or the X-wing and TIE fighters) – and a couple of others I dare not spoil for you.

With two more films on the way in this franchise, its future can’t hang on characters already in their sixties, so it’s important to get the new heroes right – Daisy Ridley’s Rey and John Boyega’s Finn are both effective and efficient and enough questions are raised to make you want to follow them into episode 8. But many of the best moments come from the old guard, with Harrison Ford’s welcome return as Han Solo providing much of the film’s unexpected humour and Carrie Fisher – most recently seen as a cantankerous mother in TV’s Catastrophe – returning as the matriarch of a film that’s built around another young heroine, as Princess Leia was nearly forty years ago – this time coming from the other end of the social spectrum.

And it’s not just the central character and the leader of the resistance breaking through that galactic glass ceiling; continuing the feminist take on this sci-fi legend, the Yoda equivalent (a wise, one thousand year old who knows everything any sci-fi hero needs to know) and even the chief Stormtrooper are women. And, as if to make sure that all demographics in the audience are covered, as well as strong women, the lead man is black, many of the main cast members are in their twilight years and the cast range from about 3 foot in height to Chewbacca’s 7 foot.

Perhaps things are just more frightening when you’re a child, but the all important First Order does’t have the ominous heft of its predecessors in the shape of The Emperor and Darth Vader, with a new CGI Supreme Leader (Andy Serkis) who’s come from who knows where and Adam Driver’s Darth Vader-lite, the unmemorably named Kylo Ren, who doesn’t quite seem to have the courage of his convictions – while complexity of character makes for good drama, you want your ruthlessly evil antagonist to be firmly rooted to the Dark Side. And his military leader, played by Domhnall Gleeson, seems somewhat whet – however he rose to such a position of power is anybody’s guess – he doesn’t even look old enough to have passed out from Sandhurst.

The dialogue and the acting are at times somewhat melodramatic – sometimes it’s clearly tongue-in-cheek, but often it seems to be taking itself too seriously – and many of the plot points feel contrived or convenient. And the arc of the story feels all too familiar – which might be what the fans want, but that doesn’t make for rewarding drama.

The action sequences certainly pass muster – from the exhilarating dogfights to light-sabre battles and everything in between. And the visuals are so seamless that the magnitude of what the effects team is doing are taken for granted.

JJ Abrams has gone out of his way to remain faithful to the original films and give fans what they want – fond reminders of their childhood, slick action, gentle humour and teasers to hold their interest for the future episodes. He delivers with huge skill and a touch of cynicism.

When a film is this much fun, it seems churlish to pick at it too much. The Force Awakens not the best film of the year, but it’s possibly the most entertaining and certainly the most successful – both in terms of living up to our expectations and taking record receipts at the box office.