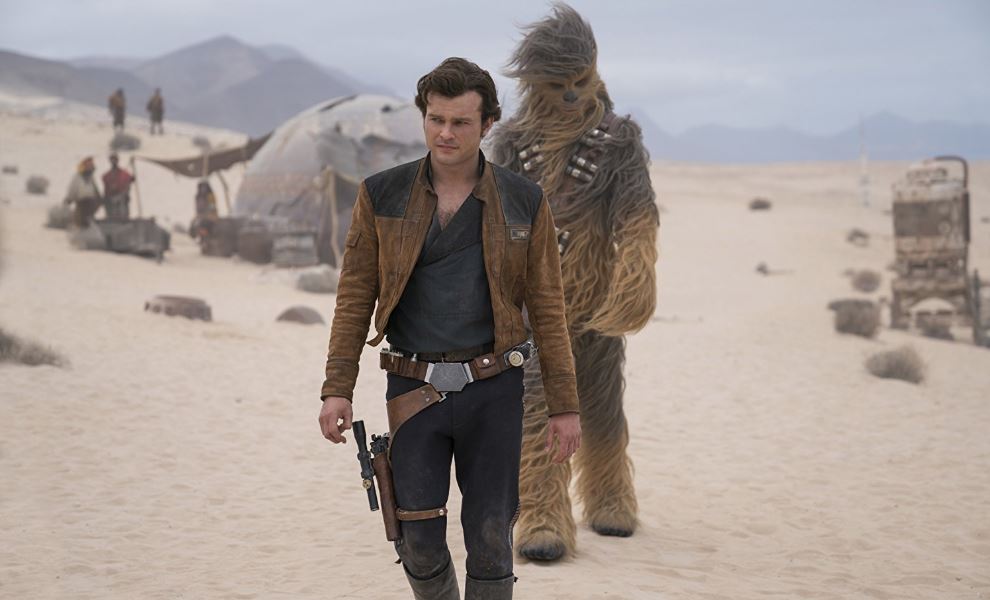 A long time ago, in a galaxy far, far away, disenfranchised young people on the planet of Corellia are fed and housed in exchange for stealing for a criminal gang led by a Fagin-like beast known as Lady Proxima (Linda Hunt).

After one of many jobs for Lady Proxima, Han (Alden Ehrenreich) and Qi’ra (Emilia Clarke) plan their escape to a better life – Han makes it but Qi’ra doesn’t. He swears he’ll come back for her.

Three years later, Han joins the Imperial air cadets but he doesn’t take instruction well and soon falls foul of the authorities. With the help of a small-time thief, Beckett (Woody Harrelson) and a furry giant fans of the franchise will already know as Chewbacca, Han gets away again – but on the condition that he helps Beckett in a train heist.

When it doesn’t go to plan, he has to make it up to Beckett to try to placate his boss, the ruthless Dryden Vos (Paul Bettany) and his most unexpected assistant.

Solo, as the name might suggest, is a movie-franchise “origin” story about Han Solo – Harrison Ford’s wry smuggler from the earlier – and indeed later – films in the main Star Wars saga films.

After Rogue One filled in a little bit of back-story to the wider saga, this is the second film to pad out the broader story, working as a standalone without requiring knowledge and without imparting knowledge required for the main space soap opera. Unlike Marvel’s Avengers model, which requires all the side films to be seen for the “Avengers” branded films to make sense, at least Star Wars gives you the option.

That said, most of the highlights of this film are the moments of recognition for people in the know – learning about how Han Solo first encountered Chewbacca, how he got to know Lando Calrissian (Donald Glover), how he first got to pilot the Millennium Falcon, and so on. None of these are prerequisites to understand the film, but they do add to the experience – as does a brief appearance by John Williams’ original score.

The film itself, though, doesn’t add much to the characters that fans don’t already know. Those we have met in previous films are largely consistent with the characters we know, but they don’t have particular arcs that tell us more about them.

But Paul Bettany’s villain doesn’t have the depth of a Darth Vadar or even a Kylo Ren – he turns out to be little more than a criminal middle-man with a scarred face, who scowls a lot. Other characters don’t have particularly coherent or believable stories. Many are unsympathetic or simply unexplained.

But the biggest problem with Solo, from the point of view of its characterisation, is that Han Solo himself is a smuggler – a thief and a smuggler – we’re being asked to invest in a film in which the good guy is basically a thief who we should support and root for because he’s a nice thief, not like that nasty Dryden Vos, who’s an evil villainous thief.

Alden Ehrenreich just about manages to walk the line between imitating Harrison Ford and making the character his own, having the cheek rather than the charm of his predecessor and lacking a little of the comic timing.

Ultimately, a Star Wars story is always going to be a critic-proof example of just what most audiences would expect – fans of the galaxy far, far away won’t really mind about quibbles with the plot – they’ll just delight in the characters they already know and love growing into their roles, laying the ground-work for the future we know, and doing so with gun-slinging, space-hopping action that keeps the pulse going throughout with everything from hand-to-hand combat to space-ships blowing each other out of the sky.

And however silly or incoherent it is in places and however much you like or care about the characters, under the guidance of Ron Howard’s “safe pair of hands,” Solo: A Star Wars Story is a perfectly competent, fun-filled space-thriller that will blow up the box office and stake its place in the Lucasfilm canon.