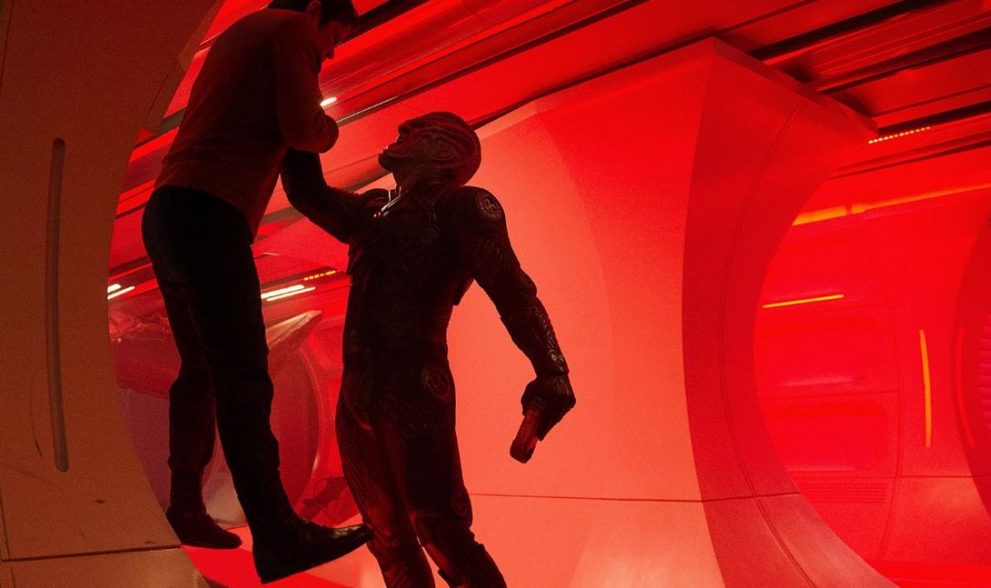 USS Enterprise captain, James T Kirk (Chris Pine) is questioning whether he’s following his vocation, and considers giving up his job in favour of a promotion that will see him commanding from the ground. His sidekick, Mr Spock (Zachary Quinto), is also have doubts about whether exploring with the Enterprise is right for him.

While they and their crew are having a stopover at the planet-sized Yorktown base, Starfleet receives a desperate visit from Kalara (Lydia Wilson), whose ask for help in saving her spaceship and fellow crew, which were captured in a nearby area of uncharted space.

Commodore Paris (Shohreh Aghdashloo) sends the Enterprise to help, but as it nears the region, it comes under attack and itself crashes onto an unknown planet.

Down on the ground, the evil Krall (Idris Elba) and his alien cronies rip the Enterprise to shreds to try to find an ancient artifact that can be used to cause devastation on Yorktown.

With the help of another stranded visitor, Jaylah (Sofia Boutella), Kirk, Spock and the rest of the Enterprise crew have to try to escape from the planet, unlock the secrets of Krall’s past and follow him back to Yorktown, to stop him killing its inhabitants.

Producer JJ Abrams has handed over the directing reins of his Star Trek franchise to Fast & Furious director Justin Lin, who certainly does a more coherent job than he’s done in some of his earlier films. But Beyond still looks and feels every bit a part of JJ Abrams’s Star Trek universe.

The opening sequence aims to introduce the main characters for viewers who might not be familiar with Star Trek, but in truth, it’s only existing fans who are likely to find themselves entranced, with others being a little bemused by the large ensemble cast, the fact that they each just happen to be exactly where the plot requires them to be, all the beaming up and down – and so on.

For anyone else, it’s a slick, effects-laden space adventure that follows a somewhat convenient and simple story, with a plethora of familiar character-arcs and sci-fi cliches – and a MacGuffin, to boot.

To give examples of the cliches might reveal too many spoilers, but even the true identity of the villain and the discovery of his motives recall several earlier films.

Star Trek Beyond is a perfectly entertaining, colourful confection with a handful of comedic touches – not least from co-star and co-writer Simon Pegg – and it certainly finds an ear-poppingly unexpected use for the Beastie Boys.

But its deep space locations often feel oddly claustrophobic, with much of the action confined to the dark, wreckage of spacecraft or two-seater fighter drones.

Colourful as it is, interestingly, at a time when Hollywood is keen to get more diversity on screen, one of the biggest black actors of the moment, Idris Elba, spends most of the film completely unrecognisable under tonnes of alien make-up.

While rounding up the main narrative and sub-plots in such a way as the allow any number of sequels, it’s worth remembering that two of the stars of this franchise died between the release of this film and that of its predecessor, Into Darkness, Leonard Nimoy’s old Spock and Anton Yelchin’s Chekov, in a car accident at his home, only last month. The producers have said they won’t be recasting his role.

Perhaps it was portentous – perhaps a nifty bit of last-minute ADR and re-editing – but during a celebration party towards the end of Star Trek Beyond, as the picture cuts to Yelchin, we hear Kirk toast “absent friends.”