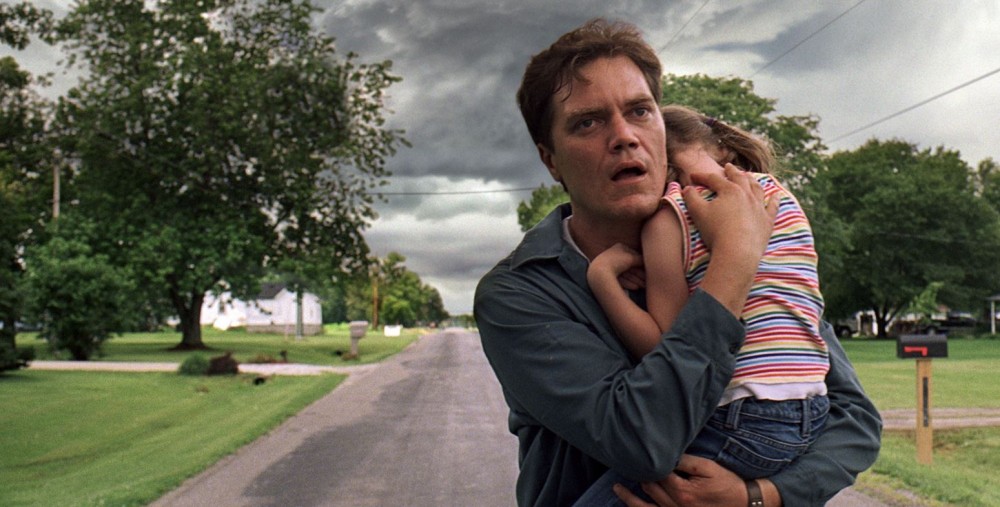 Quarry worker Curtis (Michael Shannon) lives in a modest home in a blue collar neighbourhood in Ohio, with his doting wife Samantha (Jessica Chastain) and their deaf daughter Hannah (Tova Stewart).
Money is tight and the stress of everyday life is getting to him. He starts seeing things – motor oil falling from the skies as rain, flocks of birds flying in formation and swooping to attack him, ominous dark storm clouds swirling above him.
He sees these as signs – portents of a devastating storm to come. The homes in the area already have storm shelters, but none that could protect his family from what he sees coming, so he borrows a digger from work and takes out a loan he can’t afford to ensure that Samantha and Hannah will be safe.
Borrowing the digger costs him his job, making it even less likely that he’ll ever repay the loan, and as his behaviour becomes more erratic, the whole community starts to regard him with caution.
Perhaps most troubling for Curtis is that he can’t work out whether some greater force is genuinely warning him to protect his family from the elements – or whether he could be beginning to suffer from the mental illness that has inflicted previous generations of his family.

Michael Shannon delivers a performance that’s even more intense than we’ve seen him manage before, which is saying something, after roles such as Gerard Butler’s best friend in Machine Gun Preacher and his Oscar-nominated turn in Revolutionary Road. This is truly a turn to admire, as his fears escalate – both for his family’s safety and for his own sanity.
Jessica Chastain is becoming ubiquitous; she was largely unknown before The Tree of Life hit our screens in July, but has since turned up in The Help and The Debt and will soon appear in Ralph Fiennes’ Coriolanus. This collection of work earned her the Hollywood Breakthrough Award at last month’s Hollywood Film Festival and don’t be at all surprised if she appears on the nominations lists for some of the bigger awards ceremonies that lie ahead. This time around, as the caring mother, struggling to keep her family together in smalltown America, her role resembles what we saw from her in Terrence Malick’s Cannes-winning Tree of Life, but that makes it no less worthy of praise.
But while the two central performances are tremendously powerful and the effects that constitute the apocalyptic visions are an equally impressive third main character in their own right, the film as a whole is more effective on a visual level than an emotional one. It is beautifully shot, but once you’ve seen a few swirling clouds and swooping flocks of birds, you feel you’ve been there and done that.
The story unfolds unapologetically slowly, but a film like this does not need to pass the two hour mark; it’s pace and lack of humour could induce a degree of weariness.
It’s always easier to identify with a main character whose experiences are more familiar to us – relationships breaking down, bereavement, growing up – but It’s always tough to develop the same bond with a character who’s suffering with mental issues, not least because we wouldn’t respond to his challenges in the same way.
Similarly, it’s harder to feel for his wife and child as we might in a more familiar situation.
It’s mature, quiet and subtle in its exploration of mental illness – often, this is portrayed with characters becoming violent, while here, our protagonist’s instability manifests itself in a desire to protect his family, which keep is well out of the realms of horror, without really placing it anywhere else.
In some films, having their child be deaf might feel like an unnecessary complication, but here, it provides added depth to the family, as they exchange signs, the parents learning to communicate at the same time as their child. On one level, Curtis understands his young daughter better than he understands himself.