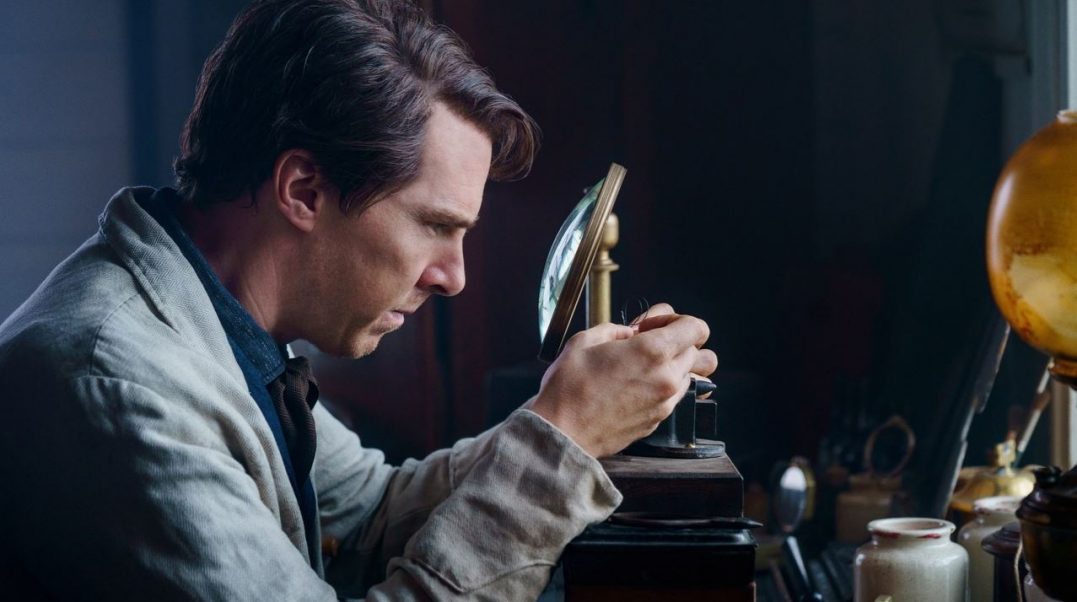 In 1880s America, the electricity pioneer Thomas Edison (Benedict Cumberbatch) is trying to persuade as many cities as he can to adopt his Direct Current to replace gas as their main source of energy.

George Westinghouse (Michael Shannon) – a rival businessman with more experience of pneumatic train braking systems – is trying to push his own system, using an Alternating Current.

One of the brightest lights in Edison’s camp is the European innovator Nikola Tesla (Nicholas Hoult), but he feels that Edison is overlooking his talents, so he  jumps ship and tries to find backing to promote his own vision.

There’s a lot at stake, as the battle rages between three of the great brains of the late Nineteenth Century, all hoping to supply electricity to the US, as it prepares to enter the modern age.

The world as we know it simply wouldn’t work without electricity, so the battle of the brains trying to win over the world with their vision should have been illuminating and riveting. Instead, it’s disappointingly flat and leaves us rather in the dark.

AC? DC? We never really understand why one system would be better than another. Perhaps we don’t need to, but even with a sub-plot about which type of current would be best for executions, we don’t really get a sense of what’s at stake – just how big a deal this is.

At its heart is an interest and important story and the three central performances are all impressive enough – even if Benedict Cumberbatch is doing little different from his previous turn as a misunderstood scientific genius in The Imitation Game. Michael Shannon – as a hirsute George Westinghouse – presents perhaps the most interesting performance – and character – as he starts the film as the all-powerful antagonist of Thomas Edison’s underdog, before ending up an unusually sympathetic presence for an actor more used to portraying villains.

But for a film about the provision of electricity, few sparks fly as most of the narrative unfolds through men talking in darkened rooms – or train carriages – or flipping through technical drawings in notebooks. And for a film about light, it’s too dark – both with the narratively necessary lack of electric lighting and an a dearth of humour. A handful of directorial flourishes aren’t enough to lift the mood.

It’s perhaps notable that we seem to learn more about the individuals than the war in which they are engaged – not least the fact that, by this telling, the most important thing for an evidently egotistical Edison was for people to remember his name – as long as it’s not associated with death. Tesla’s name is also well known, nearly 140 years later, perhaps thanks to Elon Musk’s electric cars of the same name – but you’d think that a film called The Current War would provide us with a winner we’ve heard of – otherwise who are we rooting for?

And that’s, perhaps, the problem – there’s a historic backdrop and the story is littered with noteworthy characters, even on the fringes, but the central characters aren’t emotionally engaging enough for audiences to care much about who wins – all that matters, really, to us is that we can plug in our TVs and charge up our mobiles; how many people particularly care what kind of current is running through the wires?

Perhaps the most interesting thing about this film is that within days of its cool reception at the Toronto International Film Festival in 2017, one of its producers, Harvey Weinstein, became embroiled in the biggest scandal to hit the film industry in decades. The film was quietly shelved and two years later, all traces of Weinstein have been removed and they’ve had a chance to tweak it here and there but they’ve been unable to jolt this Frankenstein’s monster back to life.