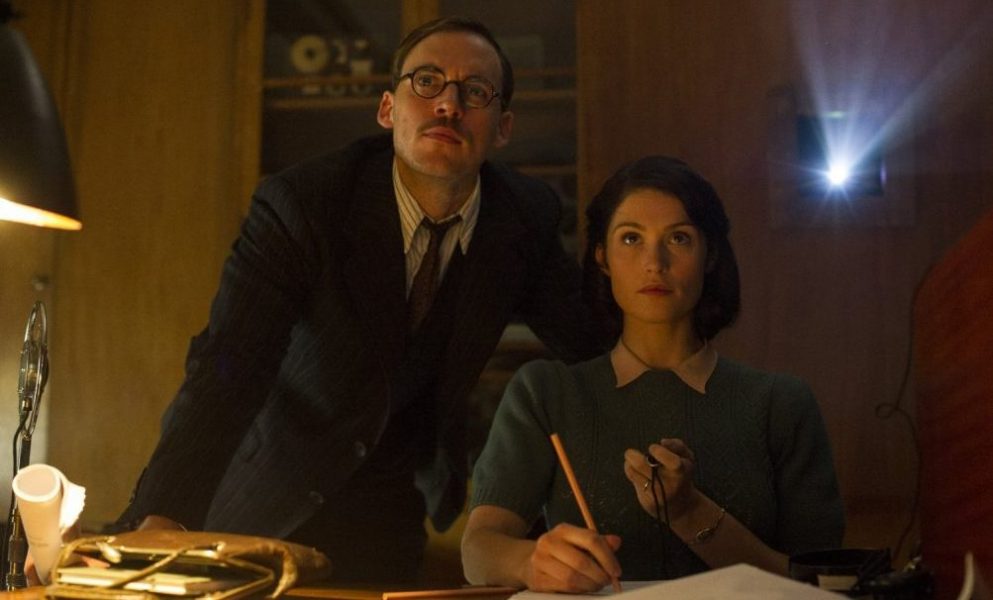 The Second World War is in full swing and the head of the government’s propaganda unit Roger Swain (Richard E Grant) is worried that some important messages just aren’t getting through to the public – or more specially, to the women at home. So he hires a modest young secretary Catrin Cole (Gemma Arterton) to beef up the female roles in the department’s public information films.

An early on-set clash with veteran thespian Ambrose Hilliard (Bill Nighy) shows her exactly why women tend to be sidelined, both on and off-camera. But Mrs Cole can stand up for herself.

When her bosses hear a tale of two sisters who took their fishing boat across the Channel to help with the evacuation of Dunkirk, they assign her to the team of the initially dismissive chief writer Tom Buckley (Sam Claflin), get her to interview the young women in question and write an uplifting feature film about the plucky heroines, to rouse the flagging spirits of a besieged nation at war – with Ambrose Hilliard in one of the leading roles.

There is much to like about this somewhat twee, chocolate-box depiction of a wartime Britain, but it simply doesn’t hang together as a well-rounded or convincing narrative, which is rather counter-intuitive – or perhaps unforgivable – for a film about the writing of films.

There’s an effective sense of period – from the sets, costumes, hair, use of language, deportment and gentle chauvinism of the characters – and on one level, it works as quite a nice study of the writers’ room, with the pressure that the creators come under from their political bosses. It was enlightening to see the machinations of the government’s propaganda unit, as it cynically sought a heroic story in which to bury his message and buoy the public.

But on a personal level, much of the emotional side of the story feels clumsy, naive, completely unlikely or totally predictable. There’s not a single beat of Catrin’s marriage that rings true, while her professional clash with Buckley is too obviously heading in only one direction.

It’s a wartime drama that’s oddly lacking in drama; there were no villains, as such, and it’s certainly not like winning the war depended on the propaganda unit making a good film. And while it starts as an earnest drama, it quickly descends into a melodrama, without having the narrative heft required to sustain the genre.

And peculiarly, for a film about making a film, with much of the action taking place at typewriters, even scenes involving the destruction of London felt small-scale enough to have been a more comfortable fit on the small screen.

Unquestionably the highlight of the film is Bill Nighy’s luvvie, a delightfully quirky but frighteningly realistic old-timer, who’s role was far enough removed from the core of the story that the better he was, the more he became a distraction rather than an attraction.

The title itself is a peculiar and unnecessary misfire. Most people with be familiar with the closing remarks of one of Sir Winston Churchill’s most impassioned speeches, insisting that the British resistance to Hitler would be seen as “their finest hour.” The book on which this film is based gently parodies this phrase, being called “Their Finest Hour and a Half” – referencing the standard length of a film. But shortening this to “Their Finest” eliminates all context and leaves you wondering “whose finest what?” It’s not like they’re trying to liken the bravery of this plucky young secretary to that of the allied forces. The title of the book was a successful in-joke. The title of the film is meaningless.

It feels a little cruel to be so down about what is, in truth, a perfectly likeable and harmless Sunday-afternoon TV-movie of a film but it shoots far below its weight, misfires almost constantly and feels much more shallow and insignificant than the film-makers thought it was. It’s as if they were all just trying a little too hard. They could have done with getting the secretary to do a rewrite.