The distributors Entertainment One have been good enough to offer our UK readers (sorry foreign visitors) some goodies to coincide with the release of Viggo Mortensen’s latest outing, Captain Fantastic.

No – Captain Fantastic is not a super hero – but it is a super film. One of the most thought-provoking – and enjoyable – films at Cannes this year, it sees Mortensen’s hippy father-of-six bringing his home-schooled brood back to civilisation to deal with a family crisis.

The kids – led by the increasingly impressive George MacKay – give particularly mature performances as director Matt Ross examines the importance – or otherwise – of societal norms to achieving a productive and worthwhile life. 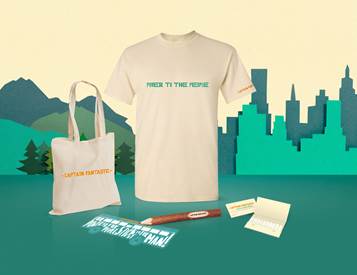 To win a gift pack including a T-shirt and a typically hippy tote bag, among other things, visit What’s Worth Seeing’s facebook page (click here) and send us a private message with the answer to this:

Captain Fantastic is released in the UK on Friday 9th September 2016. We’ll announce the winners the following weekend.

AND THE WINNERS, WHO KNEW THAT DAVID CRONENBERG DID NOT DIRECT THE TWO FACE OF JANUARY WERE:

Well done to them – and thank you to everyone who took part.