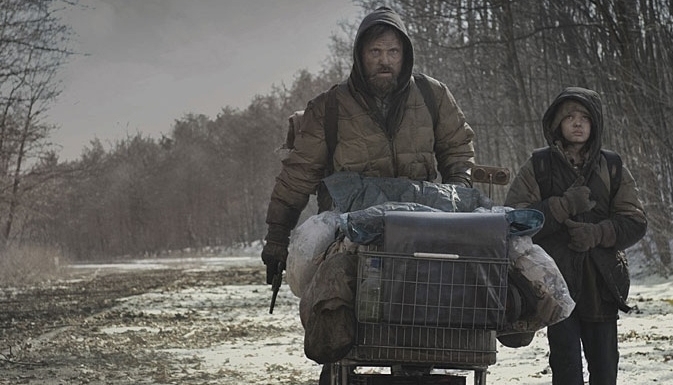 Landscapes are barren. The sky is white. The weather is bitterly cold. Survivors are scarce and most people who have made it this far are either hunting fellow humans to eat, in the absence of any other animals or vegetation – or are themselves close to death.

An unnamed Man (Viggo Mortensen) and his unnamed son (Kodi Smit-McPhee) are working their way south, in the hope that they’ll find clear skies and blue sea.

At ever turn, the Man puts his own life on the line to protect his son – by fighting off hungry gangs or barbarians or hoarding whatever food they can find in abandoned houses and hide-outs.

The dispassionate, single-minded Man has long since given up hopes that any other humans might be good, in stark contrast to his optimistically naïve son, who hopes that each person they meet might be worth helping.

Sometimes, he manages to persuade the Man of that fact – other times, their own survival and their mission to reach the ocean comes first.

We’ve seen post-apocalypse on the big screen many times before, but rarely has it looked so bleak, which admittedly seems a bit odd to say, since if post-apocalypse wasn’t bleak, we’d all be campaigning for the end of the world.

But John Hillcoat’s interpretation of Cormac McCarthy’s novel is certainly somewhere you wouldn’t want to be.

Visually, it’s necessarily grim – the characters necessarily have nothing to talk about but their meagre existence – and the locations are necessarily as dead as the miserable, grinding plot.

Hidden inside clothes that most tramps would forsake, Mortensen does his best with what he has to do and there’s a remarkable cameo from a well-disguised Robert Duvall, but there’s really very little for most of the actors to do. Guy Pearce – the star of Hillcoat’s last film The Proposition – pops in to say “hi” but might as well not have bothered – any old unknown actor could’ve provided the same service here.

From a film story-telling point of view, a big concern is that it leaves almost every question you might have unanswered. This is, of course, because the book does likewise, but novels have the freedom to delve inside characters in ways that films can only suggest, which to a large extent leaves this film little more than a father and son, traipsing from one location to the next, shivering here, hiding there, eating this, thieving that.

They have two basic goals – to survive and to get to the ocean – but with no idea of what might happen when they get there.

We don’t know what they’re running from – what caused the apocalypse – how long they’ve been on the run – why (as we seen in a series of flashbacks) the man’s wife (Theron) chose to die, rather than join them – why, if so few people have managed to survive, there are near-blind pensioners wandering around (whatever happened to the survival of the fittest).

The flashbacks to happier times with his wife don’t help us understand the man any better – it shows us that he used to be happy, but to what end? We kind of assume he was happy before the world as they knew it ended – and very little about his previous life is comes back to help or hinder his progress in the present.

Arguably, expecting to get answers and have a comfortable ride are consequences of too much dependence on being spoon-fed with a diet of Hollywood convenience.

But that’s the world we live in – do we need to spend £8 and two hours in a cinema, watching people freeze and starve – we have a cold snap during a credit crisis – we can get that for free by looking out of the window.

Some will see it as unsatisfying – others as a challenge. But a challenge has to have a goal to be satisfying. A relentless march into the void doesn’t really teach us anything about the world or ourselves. And with very little of substance happening for nearly two hours, if there is a point to be made, a lesson to be learnt, they didn’t need to take up so much of our time doing it.