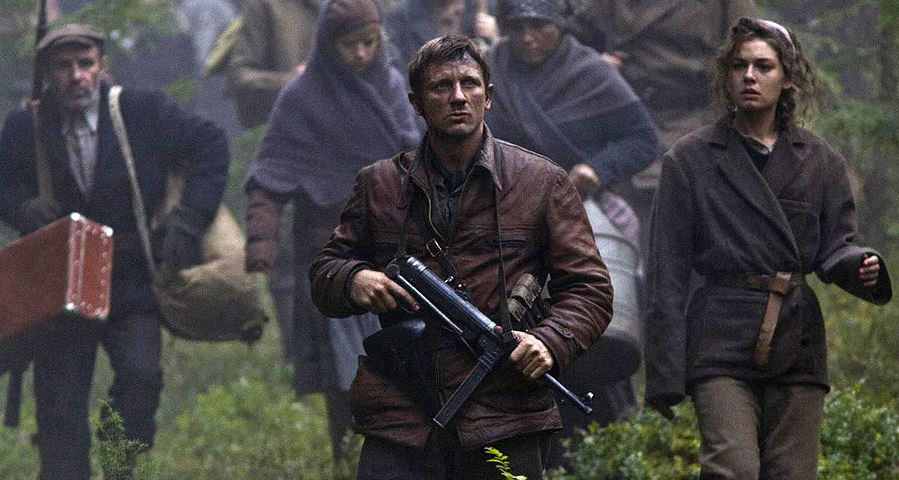 Belarus. 1941. The Nazis are closing in.
The Bielski brothers Tuvia (Daniel Craig), Zus (Liev Schreiber) and Asael (Jamie Bell) find themselves leading hundreds of Jewish refugees, hiding out in the forest.
Big brother Tuvia becomes the self-appointed boss and in order to survive, everyone else falls into line.
Under his guidance, they build log-cabins, seek food and learn to use what weapons they can find.
As the time goes by, food supplies start to run low, tensions within the group start to run high, disease sets in – the true hopeless horror of the flight from the Nazis becomes apparent.
On a reconnaissance mission, Tuvia and Zus stumble across a patrol of the Red Army and Zus’s frustration at the way his brother has taken over persuades him to sign up with the Russians to take the fight to the Nazis, rather than just sit and hide in the forest.
The baby brother Asael does his best to try to keep the peace.

This is one of those films where, when you hear the rough pitch – hundreds of Jews survive by hiding from the Nazis for two years, in a forest – you think “that could never happen.”
But it did.
And sadly, even after watching this film, you still think “that could never happen.” Where did they find enough weapons – and ammunitions – in the forest for twelve hundred people to last two years? How did they feed everyone? Make new clothes? Obtain medicines? It’s not like they could pop to the shops.
It might have worked better, oddly, had it been presented as a fiction, as it would’ve been less frustrating having to accept what you were watching.
The director of The Last Samurai and Blood Diamond treats this real life story like any other Hollywood action film, with guns – wherever they got a two year supply from, with Nazi bad guys, underdog good-guys, rivalries within the underdog good guys that have to be overcome to get the better of the bad guys.
Given that it’s sold as a true story, you know at least someone must survive, to write about it afterwards, which removes some of the tensions.
Most of the time, there doesn’t seem to be enough going on – there aren’t enough battles against the Nazis – a lot of the internal rivalries go round and round for ages before reaching a head.
The casting doesn’t work either – while James Bond, sorry, Daniel Craig does a solid enough job as the tough leader and Liev Schreiber is thoroughly convincing as a spurned number two – they are about the least likely brothers in Hollywood history. And baby Bell’s inclusion serves only to make this key aspect of the story struggle even further. And Jamie Bell’s character is too lightly drawn – simply marrying him off during the film doesn’t make him any deeper, or wiser.
Like last week’s The Reader, we’ve got a bunch of eastern European characters talking to each other in English in their native accents. It probably would’ve been more convincing if they’d cast Belorusian actors and given us subtitles – something they limited to some of the scenes with the Russians.
It’s an incredible story which remains unbelievable even after seeing the film – but it’s a worthy attempt to tell it. It actually seems to work while you’re watching it, but it’s only when you think about it afterwards that it starts to unravel.
It’s one of those rare occasions where the film-makers would’ve been better off if you forgot about the film the moment you left the cinema.