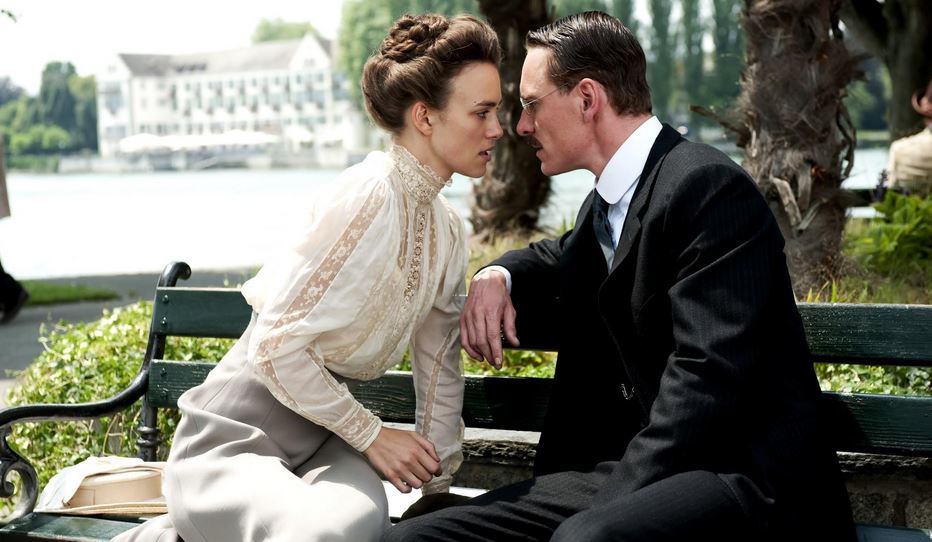 Using techniques gleaned from the pioneer of what became known as the “talking cure,” Sigmund Freud (Viggo Mortensen), Jung manages to restore his patient to health, not least by pinning her problems on abuse she received from her father, as a young girl.

As the treatment progresses, Jung begins to correspond with Freud and the two men become both professionally and personally close.

Sabina quickly understands her problems and goes with the treatment, and soon, Sabina is healthy enough to begin her own journey from patient to one of the first female psychoanalysts.

But as she heals, Jung – happily married to a wealthy heiress – falls into a torrid affair with his patient – something that, along with his newfound ideas that verge dangerously close to the paranormal, put unbearable tension on his relationship with Freud.

David Cronenberg has come a long way from his roots as the foremost exponent of body horror, with such films as Scanners, Videodrome and The Fly creating almost a sub-genre of his own.

His later films included more surrealism (Naked Lunch and Existenz) and dramas grounded in the dark side of reality (Dead Ringers and Crash).

Most recently, he’s been involved in a commercially and critically successful collaboration with Viggo Mortensen, with first A History of Violence and more recently Eastern Promises – perhaps his most accessible films of a long career.

A Dangerous Method is the director’s third successive collaboration with the actor and appears to veer ever further from the kind of films that made his name.

There are no shocks or frights in this film, that – as the name of the play Christopher Hampton based his screenplay on, his own The Talking Cure, suggests – there’s very little action at all.

Once Keira Knightley’s Sabina Spielrein is cured of her jaw-jutting psychosis, there’s a lot of talking – and a little spanking – but not much else.

For those who are interested in the birth of psychoanalysis and the tensions it spawned between its creators, this is – of course – a fascinating insight, but for the complexities and intricacies of the relationships portrayed here will be over the heads of most cinema-goers.

The performances from all three leads are worthy of praise – only Michael Fassbender has received much awards acknowledgment, largely due to the fact that the film comes close to similarly impressive turns in Shame and Jane Eyre. He’s an actor on the way up and this film will do nothing to stop that trajectory.

But although Mortensen’s quietly underplayed Freud never feels anything less than genuine, it’s not a character that grips the audience and holds the screen, as he did in his previous two Cronenberg outings.

And while Knightley convincingly portrays a woman who goes from a patient to doctor – with all the character changes that involves – the material fails to give her enough of an emotional connection with the audience.

The sets, costumes, dialogue and delivery perfectly evoke the era, but there’s too much telling and not enough showing as this film about “the talking cure” inevitably involves a lot of talking.

Hampton’s script feels like more of an intellectual exercise or an academic enterprise than a particularly involving drama.

For medical historians, the film will be thrilling, but for most people – whether or not psychoanalysis features in their life – the development and acceptance of the science and the controversy that continues to surround it doesn’t carry enough significance to make this much more than a pretty – and pretty wordy – period drama.